Lots of people want things to be made simple for them. They want an easy decision, and once decided don't want to revisit it again. A truth then is a truth now.

Except the world is more complicated than that. As most of you know, yesterday I sold my beloved road bike, Estela. It's triggered an avalanche of feelings, not all of which I expected or understand.

It may not seem like it, but I'm a sentimental guy about some things. I have a feeling that for some things, if they serve you well and faithfully, deserve more consideration than you'd normally give a thing. Several examples. The 83 Accord Hatchback was the best car I've ever owned. If I could get a new example of that car, I'd drive it.

Note please, not a new Accord hatchback that would come with a sunroof and a wretched so-called infotainment system. Info-taint is what I call it. That car went and went and went. 340,000 K, and it never didn't start. Not even that weekend skiing out at Mosquito Creek where it was 50 below and snowed a ton. Mind you, I had to crawl in the hatch because the doors froze shut, and it took a half hour to warm up enough for the doors to open and move the car.

I nearly cried when told that it couldn't be fixed, and wasn't safe to be on the roads anymore. If there's a good car heaven, it's there. Then we got a 95 Caravan that was a POS. There was no sentiment about getting rid of that. The other cars I've owned have been just cars. Transportation. Used, and replaced when used up. That's my usual patter, use something till it's used up.

Estela was nowhere near used up. Estela I'm sentimental about. And yet, I know selling is the right decision. Things should be used for their purpose, not gathering dust. I know in my head that I'm not going to be out on the road going fast, but my heart doesn't know that. I see a cyclist zooming by on a nice bike and my heart goes pitter patter. Then my knees wince thinking about going uphill. 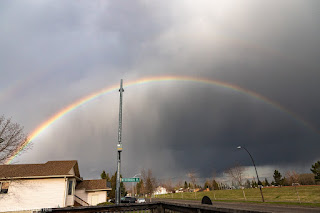 This rainbow is from a month ago. Not the best photo, but I was browsing through wondering what to blog, and this caught my eye. Rainbows are ephemeral. Here and gone. Our experiences are here and gone. I didn't know that April 8, 2016 was my last bike ride down Road to Nepal, going with my buddy Leana. Like so many things, I didn't know it at the time. I figured I'd absorb the message, train harder, and go faster. Somehow that didn't happen, and I know it won't now.

So I'm going over the rainbow to a future where I don't call myself a triathlete anymore. Swim yes, I can't wait for the pools to reopen. Maybe even open water; I still have a wetsuit. Bike will only be short rides around town, hopefully with buddies, probably with a camera at least some of the time, having fun. Running? A big question mark. I was running for a bit back at the end of April. After the last run my knees and calves and hams felt a bit cranky and decided to rest them. There was a long walk sandwiching a 5K run in mid-May, and I haven't run since. I'm trying to walk regularly, and dream of running, but you never know.

I tried sorting through old bike clothing, making a pile of stuff that can go to recycle and didn't get very far. After all, who is going to want a jersey or shorts that have been thoroughly sweated into, tainted? Nobody. About the only things I'm sentimental about there are the jersey I did IMC in, a couple of the race T shirts. But why keep them if I'm not going to use them? Am I going to frame them? No! There is a hydration pack, used only a few times. Would anybody buy such a thing?

I spent part of yesterday afternoon going through my social media trimming connections that appear to be dead. How long does a blog stay dormant before you decide that person isn't ever going to blog again, and you drop them from the blogroll? Complicated. I'll probably be tweaking my blogroll a bit, as the blog evolves. What it evolves to, I don't know yet. Stay tuned. And Facebook, there's lots of people on there that I don't see anything from them, no interaction, no nothing. Some of them have been out of my life for decades. Should they stay on my Facebook friends list? Complicated.

I've been developing a list of things to be done soonish, and got started today. There's some bigger projects in mind, and I should get started on them too. A bit every day. Stay tuned for results. 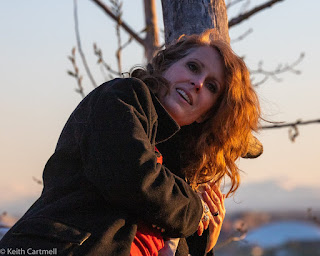 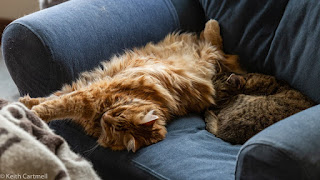 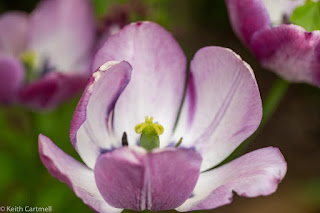 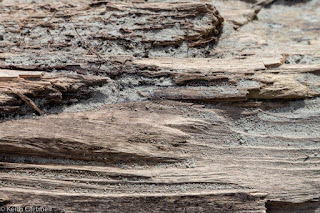