That was a happy accident

I like rambling among the driftwood, thinking about composition. Again, my rule is touch nothing to compose a photo. It's even better if there's something besides wood in the image.

But consider this image. 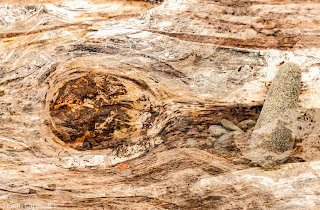 I liked it when I took the shot, or so I thought, and I liked it more after editing. It was only after looking at it while thinking about what to write for the blog that I noticed. Did you get it?

Go back and look more carefully. Maybe start with the long rock in the lower right. Does it look a little odd? Don't scroll down just yet. Take a sip of coffee (or tea, or juice, or wine if it's that time of day for you) and look again. Your social media can wait a moment. There's a reason. Indulge me.

Maybe you figured it out, maybe not. Here's another photo to help you out. 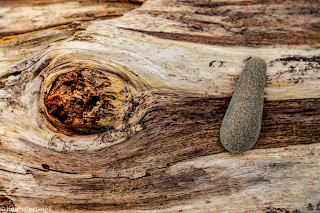 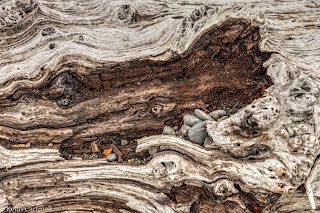 In a theoretical sense I know one way of doing a double exposure in camera. It's a bit of a pain, and I haven't tried for a photo I'd be willing to show anyone. Of course it can be done in Photoshop, but I don't do that. What I've read says Lightroom doesn't do double exposures. So what happened?

I goofed, is what happened. I was trying to drop three different exposures of the bottom image into Photomatix for an HDR shot, and selected the wrong photos. My assumption was that the software used photo data to line up the images, and if it couldn't do that, no image was done. Except no, I think it just overlays the photos and lets you carry on.

Normally such a mixture would be an obvious mess. Maybe you think the first image above is such a mess. I applaud your finely tuned visual acuity. But as an image I'm still liking it. They line up remarkably well, and completely by accident. The double exposure adds some complexity to the wood, and doesn't look obviously unnatural, at least not to my eye. I'll have to try this some more.

What do you think?