After the clear sunny HOT days, it's clouded over and showers were forecast. There are some indoor things to do, but it somehow didn't look rainy and we wanted to be outside, but not on a beach. We headed up to Shine Falls.

State Highway 2 kind of implies a major road, doesn't it? Not. It's paved, mostly 2 lanes, with a very occasional passing lane, or 'slow vehicle bay' as they call some of them. The limit is 100 kph and to do that you'd have to be driving an F1 car with absolute assurance of no oncoming traffic. 80 is dangerously fast most of the time. Some of the curves are 25 kph and they mean it.

After the highway there is more paved road, but it's even more twisty. Then a gravel road. The twisty part should go without saying. Plus a one lane bridge, though that's nothing unusual. Siri wanted us to turn left at gate plainly marked 'Danger No Entry' and a walking symbol with the diagonal ban line. We drove on for a bit, Siri bleating 'return to the route!' There was a parking lot and a covered picnic bench a little further along, with no mention of the falls. Just another eco preserve. Mention of an easy track with a 2 hour return, which the literature had mentioned. Also a much longer one for experienced and well equipped trampers only.

There was a trail, just barely. We figured we've come this far, and it hasn't rained yet. The hard part was where the trail divided, one going up, one going down. We picked down, and it all worked out. It was worth it. These are the tallest falls in the area at 58 m high. 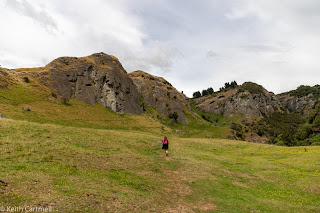 These bluffs are huge! 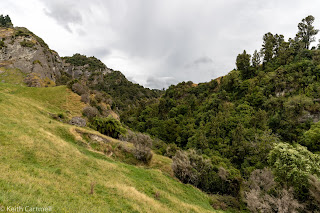 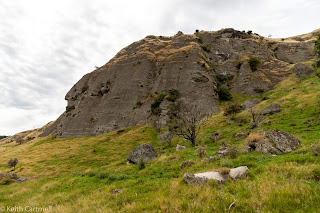 Can you see Linda in the distance? 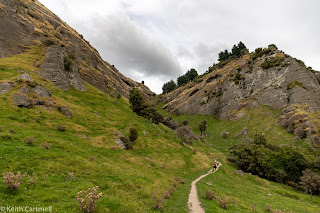 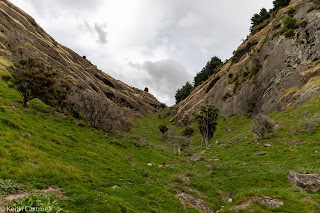 We've seen this hexagonal form before. It helps hold the gravel on the trail and prevents erosion. The footing is much more secure. Linda likes it. I chatted to a guy maintaining the trail, and he says it's made in big sheets for driveways. 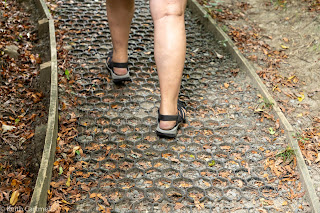 I loved the green rocks in the water. Normally water ripples don't seem to show up well in photos, but this is cool. 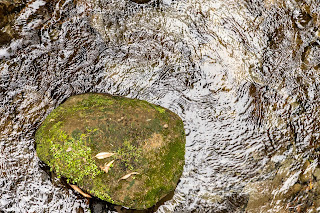 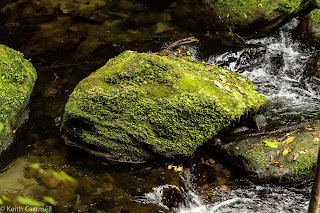 Not Shine Falls, but my heart went pitter patter. 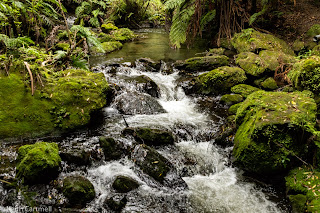 This is the first view of Shine Falls. 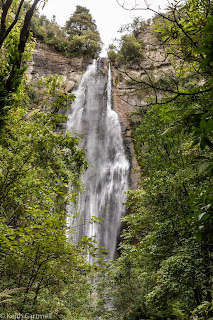 For a sense of scale, look carefully in the bottom right. There is a pool at the base of the falls, and a group of teen kids were playing in the water. 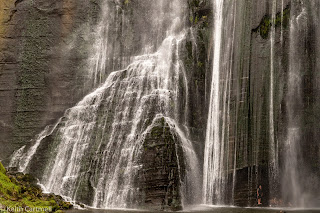 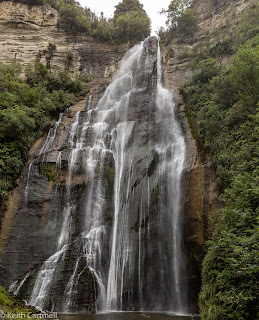 Linda, awestruck, but standing back to avoid the spray. 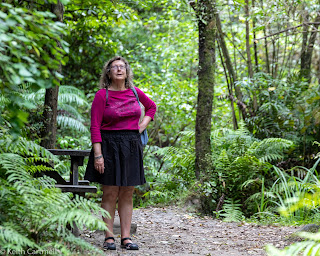 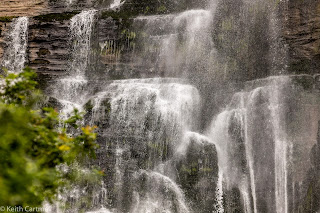 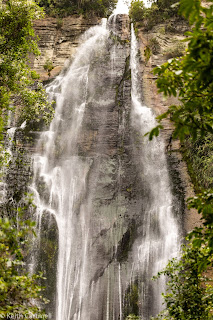 I had fun with this. You might not believe me, but this is a rock, a big one. 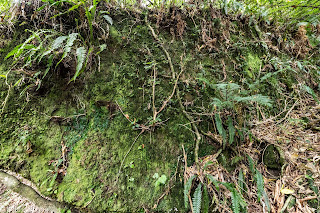 In the end I was surprised at how many people were there. 4 people were going out as we walked in. There were about 2 dozen at the falls. 2 couples arrived while we were there, and another 8 or so were headed in as we walked out. This, out in the middle of nowhere along a brisk half hour walk for us, with no encouraging signs.