I've only been out doing night photography a few times, and each time I wonder why I don't do more of it. Yes, it's a bit more work all round. In the daylight there's so much light there's lots of room for getting away with a mistake on settings. Not so much at night. Plus it's usually colder, meaning your camera battery will die sooner, and you have to be smart enough to dress for it. You have to keep your personal security in mind which usually means going out with someone else. Sometimes it's hard to head out of the house after a long day.

At night, light is your bitch, as some photographers say. You put your camera on a tripod or other stable surface, and you can let the sensor look at the scene for many seconds, gathering light in a way our eyes can't. Changing the ISO, exposure speed, and aperture all dramatically change how the photograph will look, which might be good or bad.

You can combine images with different settings, if you do everything right. Consider a scene like the first photo below. There's some really bright elements, like the building and bridge lights, and some really dark elements like the night sky. Looking at it with our eyes we only see the very brightest stars, if any at all. So we can take a photo with mid range settings, one that looks dark because it's only capturing a bit of the light to get all the detail in the brightest elements, and one that looks bright because the darker elements are properly exposed. Then we (and when I say we, I mean Lightroom) mix them together and you get this. Stars and light trails over downtown. Plus the smoothed out river for reflections. If you do it right, reflections don't make photo twice as good, they make it ten times as good! 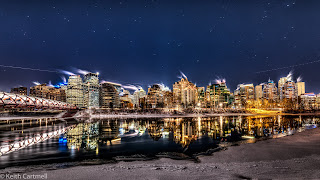 Here's a bit of a different view. You could never do this shot in the daytime. First, you'd get trampled by all the pedestrians. Second, it's so bright the reflections wouldn't show up in the puddle. Reflections are awesome.

You get choices. In the original of this, the Tower is off to the left, along with the reflection. Because of where it is in the lens, it looks distorted, and distracted from the serenity of this image, so I chopped it out. (Yes, I know, there are Tower fans calling me a heretic just now. You shoot what you want to shoot, and I'll shoot what I want to shoot.)

Three of us were crouched around the puddle. This is one of the times the articulating screen on the camera is awesome. As a side note, one of the people brought some bottled water and we created the puddle. There are some cautionary tales about puddles you might find downtown. 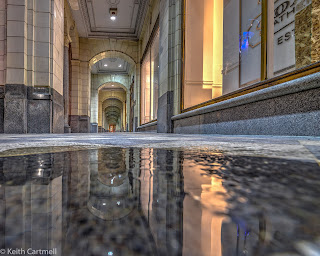 A night sky selfie. One of the reasons I bought this lens is to shoot the night sky when we visit New Zealand. I might not ever see the Southern Hemisphere skies again, and I want some nice photos. I was out last night doing some experimenting. This is a still shot, one that I'll probably assemble into a short movie. Lots of airplanes going across the lower part of the image, which is pretty cool. You can see one bottom right, and there's another if you look carefully. And me of course. Since the camera gets set up and clicks away all by itself, that leaves the human to wander around doing other things. Like enjoy the view. I was hoping the light from my phone would light me up a bit more. Oh well. It's all a learning experience. 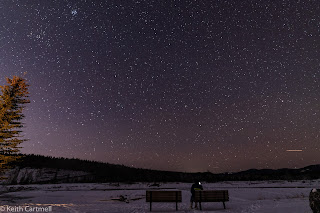 Technical stuff here, most of you can stop reading.
*ISO 1250, f1.8, 20 second exposure. Next time try 15 second exposure and ISO 1600.
*There is a bit of coma in the corners, not sure how much is star trail from exposure time. But you have to look hard for it. I'm not choked in the slightest about it.
*Consider the foreground a little more carefully. In this case the horizon was slightly slanted and I had to fix it for this shot.
*The tree and a bit of the ground is lit up by light from the car running. It doesn't ruin the shot, but something to keep in mind.
*This was shot near the Maclean Creek campground in K country, and there is still lots of light pollution in the sky. The shot above is looking south and slightly west. I don't know what that bit of light on the horizon just above my head is; there are no towns in that direction for a really long way. Maybe there is a work camp or a gas plant putting out lots of light. Even looking straight west there was still lots of light in the sky, though the Milky Way shows up nicely.
*It would be really cool to get stars reflected in water.
*Bring a book to read. Maybe a thermos of mint tea or something. Or as Neil suggests, get Yahtzee on the phone.
*I am THRILLED with this lens!