I got asked if I will select both a film and digital image of the month, now that I seem to have got a grip on getting actual images out of a film camera. The answer is no. The sensor technology doesn't matter. Odds are that the 6x9 film photos might show up fairly often in this monthly post because I tend to put more thought into them. In fact, that's becoming one of my criteria, could this potential image be in the running for image of the month? I've been thinking about why I'd choose to shoot a particular scene on digital, or medium format, or 35 mm film. Keep an eye on the photo blog for that.
2nd Runner Up
This is one of the first images taken this month (After the race on the first) and I knew it would almost certainly be one of the contenders for IotM. I like it when that happens, since it raises the bar to look for even better images. 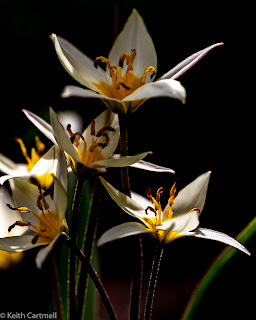 1st Runner Up
That glowing orange, the dreamy bokeh, what's not to like? 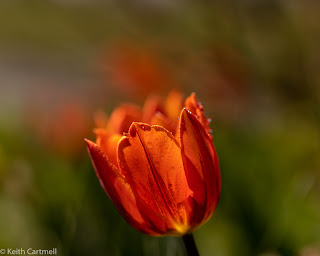 Image of the Month
Why a film image, and why black and white? Most people like that hit of colour, and the runners up supply that in spades. Except this isn't a popularity contest.
There are two reasons. Vision and texture.
Some photographers talk about seeing a particular image in their head as they look at a scene, and strive to capture a photograph that expresses that image. That image might closely match what our eyes see, or it might be quite different because the photographer "sees" the scene in a different light, or altered by the characteristics of the camera lens or sensor technology, or even the end result after digital manipulation.
As soon as I saw this stairwell I knew there was a photo there. There was a mood to it that I hoped to capture. I have to confess the ultimate version of this is a bit darker, taken in the evening, with full control over the lighting for dramatic mood. Add in a sultry but hard boiled detective in a trench coat and fedora, showing some leg as she tries to lure some criminal into thinking he's not a suspect.
I could see all the different textures and light showing up on the surfaces, and tried to get an exposure that would capture them. This was one shot after carefully checking the light meter and thinking about where I wanted to expose it. There was no digital camera to experiment with. As a side note, Michelle and I visited this stairwell nearly a month later (during the day, no trench coat or fedora) and that bicycle is still chained to the railing. 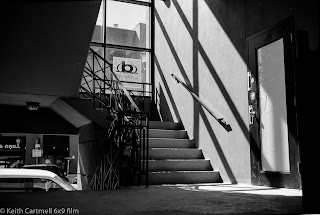