Lately a trip, and the start of an experiment

Photography is one of those hobbies where the participants can easily fall victim to GAS. No, not flatulence from sniffing developer fluids, but Gear Acquisition Syndrome. Actually, people doing any hobby that requires a thing or things to do it, can be subject to GAS. It's the idea that you need better equipment to be able to do the hobby 'better', whatever better means.
Now, in many cases new, better equipment can make a difference, but often it's small. The cost benefit ratio is very poor, like a unfit triathlete buying an expensive tri bike. Yes, they might be a bit faster, but they aren't fit enough to get full advantage. They would be better off getting faster on the bike they have.
That thought applies to many hobbies. Get better with the gear you have, rather than lust after new gear. In the photography world, one would have to be an expert to tell the difference between a photograph taken with today's nearly top of line camera and one nearly top of line from say, 10 years ago. Most times, the platform it's viewed on, like Facebook or Instagram, will erase the differences. (Yes, there are circumstances where it would be easy to tell, but let's not get pedantic here.)
However, gear does break or wear out. There's an adage in the photography world, never buy a pro's old gear. Why? They use it till it is on the very cusp of not working any more and sometimes till it actually stops working for good. I've seen pro camera equipment. Parts are held on by tape. The focus mechanism grinds. Some non-essential parts of the camera don't work any more. Sometimes they have to do things just so for them to work. Only then do they go buy new equipment. Often they would rather use their skill and experience on older equipment that they thoroughly understand, than buy some expensive new thing.
Hobbyists are in a different place. We typically don't use our gear as hard. We aren't competing with other people to get a shot that might make the difference making money or not. But eventually we get to a place where the current gear really isn't cutting it anymore.
Something that was a surprise for me to learn when I got into photography is that camera bodies are the disposable element in the gear. One expects to replace camera bodies periodically. But the glass lenses go on and on. The glass I have would be loosely described as Canon EF. If you don't know what that means, don't worry. It just mean that any camera body I buy that takes EF lenses will work with my current lenses. Which essentially limits my choices to the cameras that Canon sells. Going to another manufacturer means buying not just a camera, but new glass as well. That can get expensive really fast. Sometimes there are adaptors, but we need not get into the limitations involved there.
So this has all been a long-winded way of saying that a friend of mine is looking at changing camera ecosystems. He's currently a Nikon guy, shooting a crop sensor camera. Which, if he wants to replace that camera body limits his choices. He did lots of looking and research, and finally picked out a Sony full frame mirrorless camera to try out. He rented that from The Camera Store, along with a nice matching lens, and invited me along for a road trip.
Now, I suppose if we were writing a formal gear review, we would have had him take a shot with the Sony, and take the equivalent shot with his Nikon gear, and me with my Canon gear. Except I had no intention of carrying around my behemoth lens to make such a comparison. Plus it's an apple and oranges thing anyway, given the differences in how the sensors handle light coming through the different lenses, and then there's how it's edited in the different versions of Lightroom, to say nothing of how the light can change in an instant.
Suffice to say that trying all that would have led to a bunch of frustration. So he signed out the camera, we went for a drive, he shot his shots, I shot my shots, we sometimes compared the images on the back of the camera, we discussed many things (shoes and ships and sealing wax did not come up), and thoroughly enjoyed the day.
A brief digression. I was astonished to recently discover that Canon made film cameras that take my lenses. I had been thinking about experimenting with 35mm film cameras for reasons that I might blog about later. Since meeting up at The Camera Store was convenient, I checked out what they had for used film cameras. They did. There was affordable temptation. Plus unaffordable temptation by the name of Leica and Hasselblad, but not going there.
But the other choice was to ask if any of my photo buddies had an old, but still functional film camera, and if they'd be willing to lend it for the experiment. It turns out my friend has not one, but two such cameras, and several lenses for them. All I need to do is buy film and put batteries in them, which is cheap. So stay tuned, as the saying goes.
Back to the ranch, as the story narrator says. We drove out to Horseshoe Canyon, then took the scenic route home, stopping wherever we felt the photographic possibilities existed. Here is a selection of my photos from the day. I don't know if my friend will publish any of his photos.
1. The entire time I was here, I was thinking of a previous road trip with similar geography. Similar, but not the same. It turns out I was thinking of Horse Thief Canyon, which is maybe a half hour drive from Horseshoe Canyon. 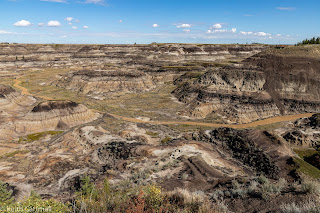 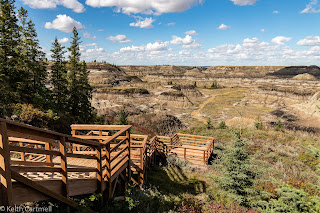 3. Southern Alberta is full, absolutely full to overflowing of wide open landscapes with gently rolling hills, scenic vistas with interesting equipment. Get the right light happening, or dramatic clouds, and you aren't going to be on time if you have a photographer in the car. 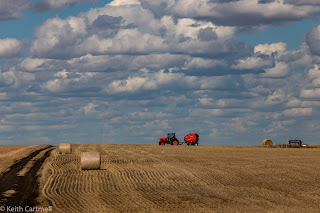 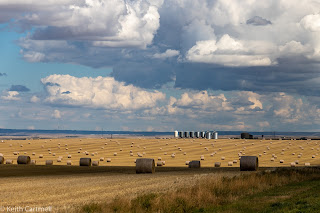 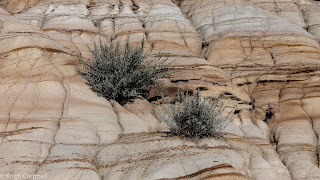 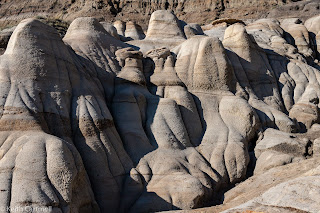 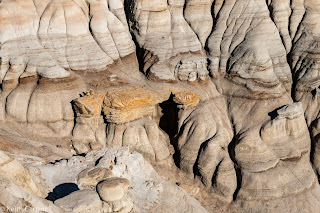 8. I felt sorry for this poor little flower, trying to grow up to the light through the floor grating, and getting stepped on by inconsiderate humans. 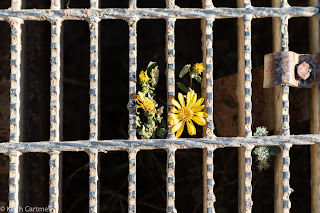 9. The mighty metropolis of Dorothy. 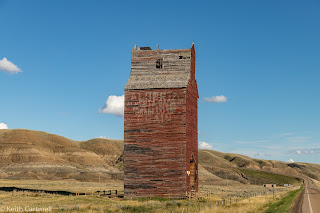 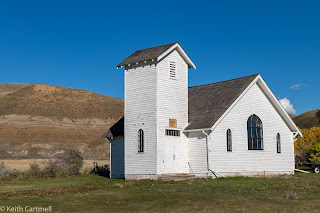 11. Yes, we drove up that road. Good thing we were in a truck. My little car probably would have made it, but would have bounced around a lot more. 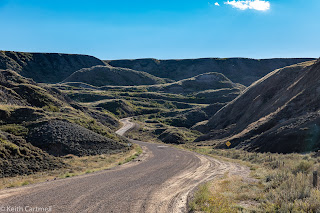 12. Windmills are a big part of some Alberta landscapes. They can be interesting, and sometimes they point to things. I had to keep moving because the wind speed and direction kept changing, and so did the orientation of the blades. Yes, I'm still thinking about the dramatic skies during the windmill visit near Lethbridge last month. 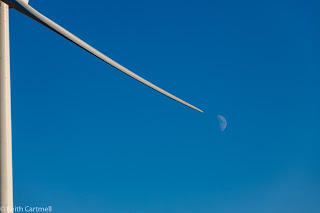 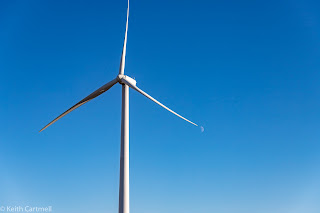 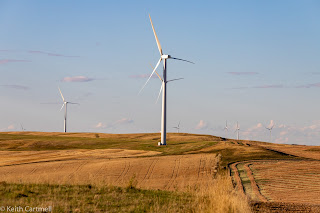 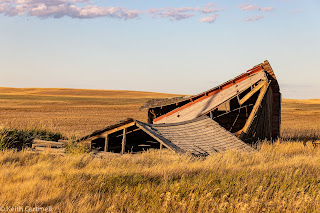 16. On the way home. I'm glad I wasn't driving. This is shot through the filthy windshield of the truck, and that's what I wanted, that old timey feel of a vintage road trip. 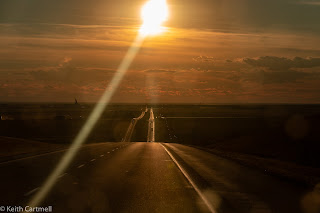 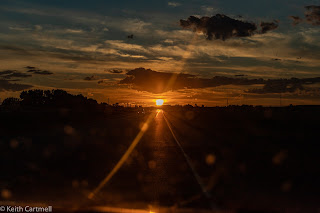 18. Calgary skyline is visible from an astonishing distance, and the sky was wonderful! How could we not pull off onto a side road and shoot this? 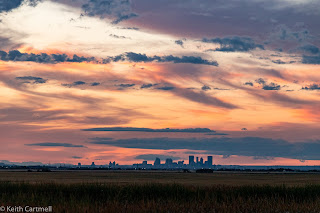 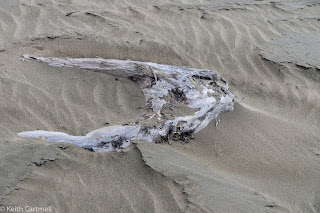 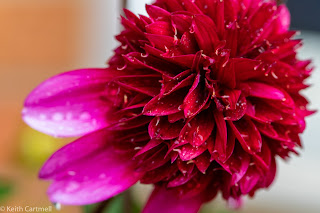 Peony, but first a serendipity. Some of my readers know I sometimes make a comment like, "I just wanted to boop that nose!" Here is the source of that comment. She was on my first trip to Yukon. During the visit to the wildlife centre we almost had to physically restrain her from 'booping' the noes of the deer-like critters pressing up against the fence because they thought we were going to feed them. 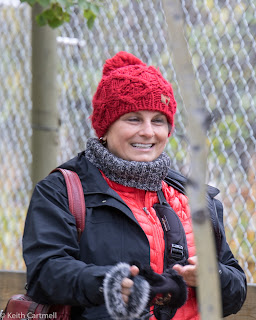 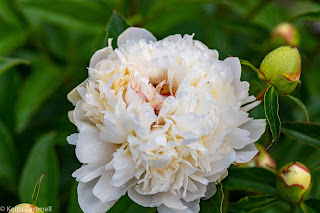 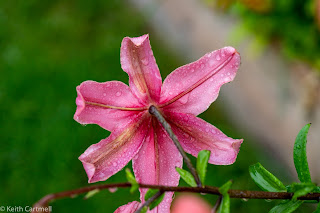 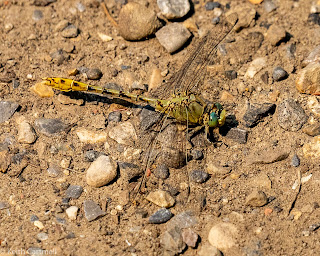 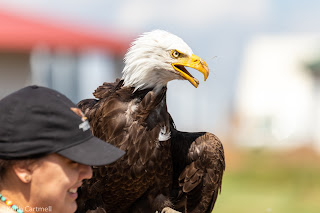 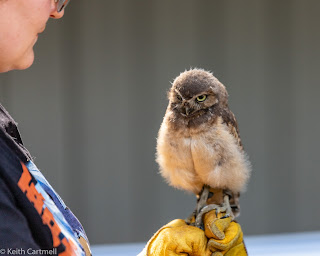