September Image of the Month

September sure went past in a hurry. There's been some nice shots this month, though a couple of the best were for clients and thus not in line for image of the month. The purple dahlia was the main feature of my photos this month, along with a couple lovely walks in Fish Creek.
I've been dithering about it (like you're surprised), wondering if I can select three of the same subject as Image of the Month and the two runners up. The answer is, of course I can. It's my decision. But which three?
Honourable Mention
Why an honourable mention? I love the light on the petals, but what really attracts me are the lighter elements to the left and right of the petals. It looks like the flower is breathing out on a cool morning. Or inhaling from the right, and expelling to the left, he said politely. I think those are out of focus elements of the composition, modified by the camera. I don't know what actually produced them, but I like the effect. 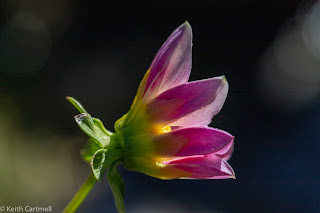 Second Runner Up
That was fun. The watering can was where Linda left it, and it took a couple of tries to get it all lined up with the right settings. 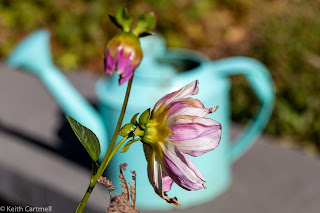 First Runner Up
Many people would like this one most, as it's a conventional landscape with nice bright colours and reflections. I love the reflections and all the diagonal lines. It was only afterwards that I realized I should have put the neutral density filter on the lens, put the camera on a tripod, and done some focus pulling. Properly done that would have been spectacular. Pity I didn't have any of those things with me. 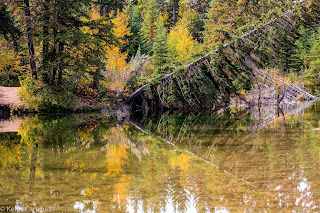 Image of the Month
Not a conventional image at all, but this is an example of taking something ordinary, like a pretty flower, and shooting it in a different way. There's all the lines in the background lending interest, and the shape of the background colour and light brings the focus to the flower. 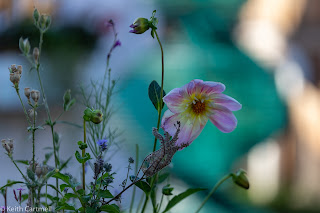