Oh boy. Here we go into major dither territory. Let's just say it was a good month for photography and leave it there. I'd hoped to complete my edits before choosing image of the month, but, well, golly. I don't think I missed a potential image of the month.

Only 45 minutes into the new month I was pretty sure I'd captured image of the month, and a strong contender for image of the year. That was a shot of the galaxy over Invercargill with a bit of aurora. Some of you may have seen it on Facebook or Instagram. And then another dozen contenders came along to make life difficult. Such is a photographer's life. It's a good problem to have I suppose. Decisions, decisions.

Second Runner up
Linda was working hard to repeat her Image of the Month success. Here I've caught her looking out over the world near Cook's Bay. 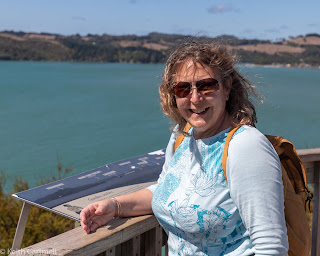 First Runner up
I've been working on what makes a good photo since even before becoming a photographer. Normally something has to be the centre of interest. The leading lines should lead to something. Here there is nothing, and yet, everything. I lose myself in this photo.

Image of the Month
Rarity kicks up the rating here. I have other galaxy shots, even some from my last NZ trip. I have some spectacular aurora shots from Yukon, but I will probably never get another photo of the Aurora Australias. 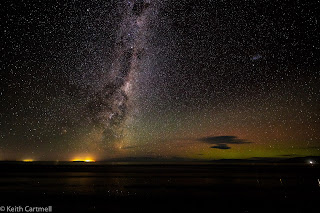