Most of the movies getting made today are crap. I think the last movie I saw in the theatre was Arrival. It's like movie makers have forgotten they are story tellers, and all they know how to do is put explosions, guns, and car chases up on the screen. That stuff is all boring if you don't know who the characters are, and don't have a reason to care about them.

Move back in time and you get cheesier special effects and better stories. Further, and you get black and white and much better stories. Many people can't conceive of watching a b and w film. Go further back, and you get films with no voices, only a music soundtrack. There is a cue card periodically giving you some of the dialogue. We can debate how good the stories are.

"Why would you watch such a thing?" I hear you asking. Why not? It's a restored blue ray version that has been assembled from 11 different sources. It's amazing that it exists at all.

We had fun watching The Lost World. Yes, and OMG it's dated in many ways. It's the first feature film that used stop action and they were figuring it out as they went along. It's easy to see where Godzilla came from. So many assumptions are baked into the movie, and they're different assumptions than today, that it makes things a little strange. This is the oldest feature film I've ever seen. There's been some short films of about the same vintage.

Just one example, any time they see something startling, the camera cuts to a look of horror on the heroine's face. She was Bessie Love, BTW, and she was working up till the 80's. I'll have to track down some other of her films and watch for her.

We didn't buy it; Linda got it out of the library.

A fountain on Cuba Street in Wellington. This was actually a bitch to photograph. The water flow is erratic and hits the paddles differently each time there is a spurt. I wanted to get the splash. Plus the perspective is weird. It was fun strolling the street, though I think it's one of those places that comes to life in the evening or during special events. 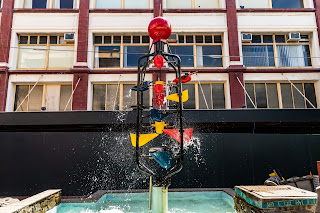 Driftwood of the Day. 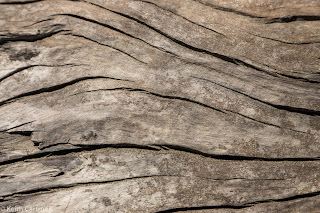