April Image of the month

I'd spoken before about being in a bit of a funk waiting for winter to be over. I think it shows in the photos. Almost all of them are just photos of something. I'd like to think they are well enough done, but there isn't the artistic touch I'm aiming for. I'm getting out a bit more often and enjoying it more.

You might remember this from the Amaryllis extravaganza early in the month. There are a number of photos of the bloom at it's most brilliant red, with the delicate tracery just visible. This bloom is just past the prime and beginning to fade. I like the slightly crumpled texture and darker colour. 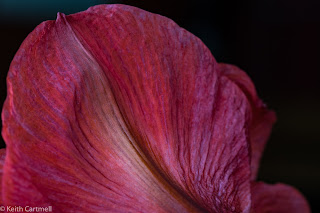 In other news I've taken a 6 month contract at AltaGas. This has been discussed on and off since before I left Penn West. I'm working with my buddy Andrea again, and if you go up the hierarchy a little, there's a guy from my team at BP all these many years ago. There's a few other people I know, or know of there, and I'm sure I'll run into them sooner or later.

One of the things I like about working downtown is the serendipity of running into people you know. Today I ran into someone at lunch time that I'd worked with at Nova (anyone remember them), and BP. We didn't work directly together, but saw each other periodically.

The gig is working with data destined to live in a new instance of Maximo 7.6. There's some data from new facilities, and then some migration of older versions of Maximo. There will be lots of subtle database stuff that would put most of you to sleep if I were to say any more about it than this. There's a bit of process work and it should all be lots of fun.