The temptation to apricate

Today I slept in. If Blogger were better about formating, it would be a giant calligraphed red letter day. This doesn't happen often. Linda had already made coffee when I got up. Another clear sunny day here.

After a nice breakfast and slowly waking up I headed out for a run. It was still a bit cool, -10 C or so, but I didn't want to wait till the warmest part of the day. Dressing for that is a bit more tricky. The intent today was to a nice long slow run. Long and slow being relative of course. Just around the neighbourhood, going places I haven't been in a while.

What was good about this is after months of working on this, I'm getting better at maintaining my cadence. All too often towards the end of a run my feet start slowing down. But look at this! 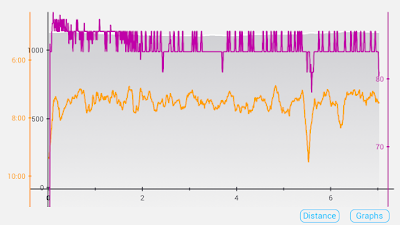 I'm pretty pleased. That one dip towards the end was slogging up a hill where the path hadn't been shoveled yet. Other than that I chugged along about a 7:20 per K pace, 7K, 51:30, feeling pretty good indeed. Almost all of it was at a chatchatchat pace. Legs and feet felt light and good. No niggles.

Back home again I'm nibbling a snack, fresh baked scones if you must know, to discover the cats apricating full speed ahead. 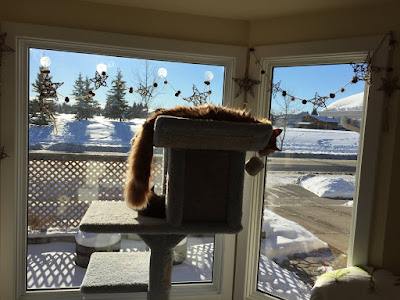 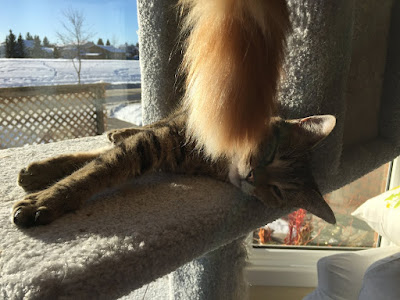 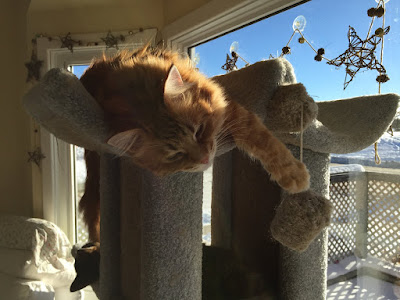 They were both snoring gently. It was so tempting to sit down and join them. Instead I went downstairs for a good stretch. Then worked on my book. I'm at a bit of a stuck point, wondering how to get into a particular scene. The last bit of writing is a scene in my head, but I'm not sure of it's place in the book. Sometimes you don't know these things till later.

Yesterday was a nice spin session. A buddy came over to try out my spin trainer and the associated power meter. This was very interesting for all involved. I've often said that unless you are already a mid to front of the pack racer, you don't need a lot of training toys. Just doing the activities, gradually building speed, strength, stamina, all those good things is the single best thing you can do. At this stage trying to wring every ounce of efficiency out of your time by training at a specific heart rate, getting the best gear to shave a few seconds, is a waste of time and money. Things are different if you're a front of the pack racer. I figure I'll worry about it if I ever get there.

An example. Learning to spin around and around rather than mashing up and down. One leg drill is a simple way of doing this, listening for the sound of the trainer. Anything but a smooth whir means you're mashing. It doesn't matter what your cadence is, what the watt output is, or how expensive your bike is. Learning the skill will pay off big time next year when you get outside again.

Or this, learning to spin faster and smoother. As you speed up you will reach a point where you start bouncing around, and your butt and back fat start resonant jiggling. It doesn't really matter what the rpm is. When I started it was just over 100, as I recall. Find that speed, and learn to spin without bouncing. Engage your core, learn to be still. By learning to spin faster, you will spin better at lower speeds.

I haven't been doing plank every day for a while now, and I got schooled. 90 seconds for me, 2 minutes for my buddy. Lots of stretching after the spin session.

Back to work. Sigh. This is going to be tough.