Help, the cats are holding me prisoner


They are tag teaming me, shifting their weight, making sure I can't get up. My lap is full. The laptop is off to one side so I can't type much, so this will be a short blog. No wonder my back hurts some days. 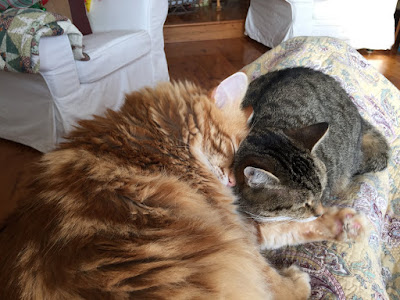 Oh, please. Help me. At least bring me a cookie then. With some milk, please and thank you.

Friday was supposed to be the start of my 80% time, but I had a lunch with a buddy scheduled so I showed up for the morning. It gives me a few hours in the bank what with some other things on the go.

Before you start feeling all sorry for me, being cut back on pay, think again. I'd suggested this to my boss back in December, but he claimed to not remember. I'm delighted by the whole thing. I'd been thinking about going to part time about now, so this works out perfectly. Which ties into some of the thoughts I discussed in my money blog from last week, if you missed it.

Lunch was the usual time and place, with someone I go to lunch frequently (by my standards) and a good time was had by all. I'd sort of thought about going running in the afternoon, but then got busy doing other stuff. Did some core.

Saturday was an excellent spin session! When I was last on the bike regularly I'd figured my FTP was 225 watts, and had written up a workout guide to the various effort levels. I've been slowly getting used to being back on the trainer again. I figured it was a good day to see if I could hit that mark again. I sent a text to a buddy, "Time trial starting 225W or puke." Just barely made it, my legs were beginning to complain and the spin was getting a bit rocky. The sign saying "This way to the re-taste zone" was clearly in sight. A little over an hour on the bike. Plus core after, though only 60 s of plank.

Sunday was a blah swim. I just didn't have it in me at all. No water feel until I'd been in the water about 45 minutes, swimming most of it, kind of sort of. Though I did put it together enough for an 87 second 100 m, even though the last 25 m was shite. Awesome breakfast after at the Blue Star Diner. Company and the food, in case you were wondering.

Then book club. Moriarty by Anthony Horowitz. If you like the original Sherlock Holmes stories, you'll like this. Great atmosphere, interesting mystery, and the ending is awesome. We met at the Merchant's pub in Marda Loop. Excellent food! I'll have to go with an appetite next time.

Monday I was looking at this. 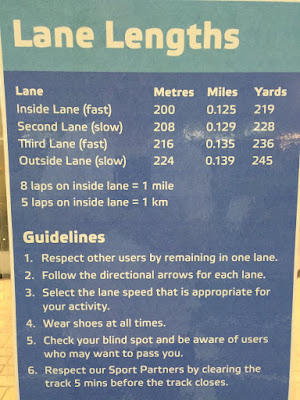 I can't count laps in the pool, so what makes you think I can count laps on a track? I had my phone keep track, kind of sort of. It says 4.25 K in 30 minutes, and that's close enough. Ran nice and easy, not trying to run too fast and stay in zone 2, but I think I drifted up a bit from time to time.

It's sort of soothing running around the track. I got lost in my book, and forgot I had planned to run in the other direction at the halfway point. There were some niggles in my left knee so I swapped a bit late. (I'm up to about 32,000 words on the book.)

My right knee was feeling like it wanted to click and wouldn't all day Saturday and before the swim. The hot tub helped I think. Overall the run felt quite good. One of my buddies was horrified that I'd run on the track, when I had either outside or a treadmill. I'm not feeling much of the outside love at the moment, and the treadmill scares the crap out of me. Maybe I've seen too many of those fail videos featuring treadmills. I know I don't run well enough for them.

Just to finish off, we got this lovely sunset while I was doing BBQ chicken on Sunday. 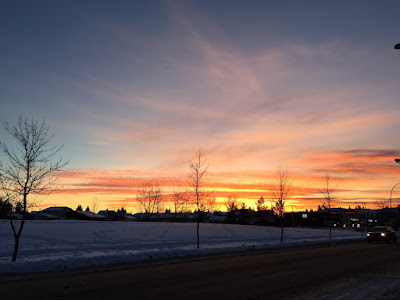