What fun! I don't think I've ever run into so many authors and aspiring authors in one place before. The weekend has gone by in a blur so I'm glad I took lots of notes. In one sense, I wish I wasn't going to work tomorrow so I could unpack the notes and start thinking about the changes I'll need to make to my wanna-be book. It's more of a big hot wet mess than I thought it was.

The difference is that I've been writing bits and pieces of it as they came to mind. I stalled on one spot for along time, then figured out how to write my way past that. As I attended the conference it became clear that I need to think of the book as a commercial property, something people will buy. The people that read it won't know what I do about it, all they see are words on a page.

It needs to have a beginning that hooks people into caring about the characters and what happens to them. There needs to be a middle that is full of interesting stuff, and a conclusion that satisfies the reader. What I have written so far has some interesting bits, all of which are much too long. I think there is the genesis of an opening scene there. I don't have a firm ending yet, although I have several ideas floating around. I'm not even firm on the balance of genres involved. There is some romance, some mystery and crime, and if you read on, some science fiction elements are dragged in.

It seems my writing style so far is a pantser and a quilter. Which is all ok, except that it's not uncommon for us to get lost for a while. I was particularly interested in hearing from panelists with experience in outlining a novel, and novel structure. I think I need to take a step back, and nail down my ending. From there I can go back and look at the structure that needs to be there to support the journey from beginning to end. Then look at what I've written so far to see what is useful or not. Or I could outline the novel from start to finish as if I hadn't written anything, and see what matches. With my luck it would go somewhere else entirely. So, characters, Dwen, Les, Mitch, Belinda, and all the rest of you? Better start winding up that backstage party you've got going. You're going to be put to work pretty soon.

In case you hadn't guessed, I found the event well worth my time, and plan to attend next year. The event sign up on the web was painless, as was picking up my registration card. I was wondering what the huge line up was for, and it turns out that some of the panels were sign up required. That was brutal. One long line, and a bunch of panels you could sign up for. Some people were dithering. That would be "No panel for you!" Many people were concerned they weren't going to get to their first presentation. I'm not sure why they didn't allow sign up in advance, over the web, once the scheduling is confirmed. Or have separate line ups for each of the panels. That way one person wouldn't get dibs on all of them.

I had real readers block trying to digest the program schedule on line. That doesn't usually happen to me, but it was a real struggle to try to figure out what I wanted to see. The paper copy was much easier, but I could see improvements that could be made. Here's my marked up version, though not as marked up as one I saw, in neat 3 colour highlighter. 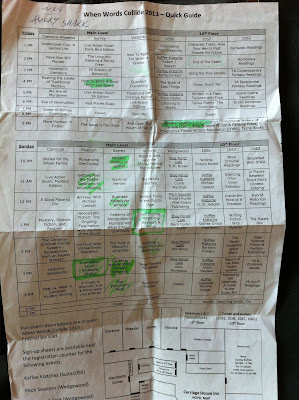 I lost count of the number of times it was in and out of my pocket. Many people were wandering around consulting theirs, especially when their friends asked where they were going next. Now I wonder if there is an app that does this. One that a convention like this could load all their programming into, along with a map of the hotel, emergency contact numbers, and any other useful information. Then each user can browse all the information about each selection, including the blurb, the presenters, and information about them. As they select each, the app builds their schedule for them. They could put in a lunch or coffee break with a buddy. In an ideal world it should plug all that into your calendar app. After the event the presenter could add any desired follow up material, like notes from the presentation, or requested followup material.

If this was available on an ongoing basis as the schedule was being nailed down they could see which panelists were most in demand, how many were in danger of over filling, or how many had no interest. This might influence the changes made as the program develops. Of course it would run on a smart phone first, and a tablet second.

The part that was most enjoyable was catching up with long lost buddies. Conversations snuck into the quiet spaces, or before/after the talks. I'm glad I'd joined the writers and bloggers groups, since I hung out with several of those people for a while. I also got a head start on research for various publishers, editors, and agent contacts. There was also a buddy's 50th birthday party squeezed in there. Overall, an excellent weekend.  And zoom, my vacation is over.