I held the phone at arm's length, while

Summer is finally here. Finally. It's so beautiful out, I'm almost thinking I should have taken another week of vacation. Had I known.

But this is warm by Calgary standards. The radio said it was 32 C (89.6F) and humid. It wasn't so long ago that just being outside in that would break me into a sweat and not want to do anything. A brisk walk would turn me into a puddle.

So what did I do as soon as I got home? Dressed for a run, and went out for a lovely easy 6K, 41 minutes. My legs would have been happy to do more, but I could feel the heat creeping up on me, and decided not to over do it. I took this as soon as I got back into the house. I think I started sweating more as soon as I got in, than I had during the run. 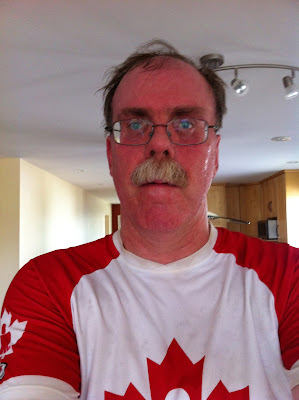 I'd done quite a bit of limbering up, mainly working on stiff hip flexors. They were giving me hell yesterday, though that's a nice change from calf and thigh. It took almost 2 K to settle in and find a stride, then relaxed and took a winding route through the neighbourhood.

At one point someone had a sprinkler on their lawn, so I channeled my inner kid and ran through it. My inner adult was hold the phone at arm's length. I was all set to do that again near the end of the run, but the home owner turned the tap off as I approached. Normally that would be considerate, but I didn't want to stop and explain. Oh well.

Even though I was going faster, I was breathing much easier after the 2K. Lots of stretching afterward. The runmeter graph is all over the place. 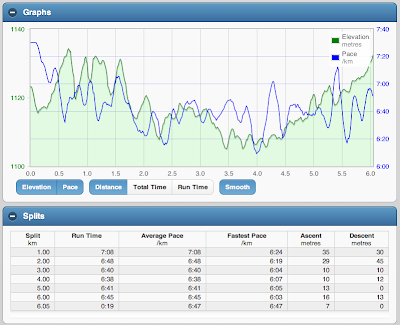 I haven't been able to work on my book at all, other than in my head. I exchanged some texts with my buddy Susi about which guy Dwen might choose. Her ew response was interesting. But then Susi is very particular. With any luck this weekend I'll be able to get some vestige of an outline down. I've got one ending worked out, but I don't know if I like it.