Wow, this is fun. Should have done it long ago. I'm having a really good time at When Words Collide.

I've run into a bunch of people I haven't seen for a very long time. The panels I've been to, or presentations, or whatever you want to call them, have been interesting and informative. The parties last night were in hot rooms so lots of people were standing in the hallway. Met a few new people. The Crime Writers group put on  an excellent live action mystery, though I didn't actually see much of it. I was butterflying.

All this has made me rethink my book a bit. So far, I've been a very indulgent writer, letting the characters do their thing, develop their own relationships, and I've suspected there's a bit of a party going on backstage. However, I can see that I need to start tightening things up, and build a proper story if I'm going to get anyone to read it. Better yet, BUY it. That is the whole point after all.

One of the first bits I wrote was the job interview scene where Ceridwen is hired. It's first in the list of scenes merely because it takes place first chronologically. However, it's death on toast as a first chapter in a book. Now I'm working toward the discovery of a bone in the digester as the first scene. The problem is that Ceridwen comes into that scene late. Hmmm, just had an idea.

I can see I'm going to have to do more thinking. There are lots more panels to attend, and no doubt, there will be even more to think about.

Some of that thinking happened during my run this morning, up toward the reservoir. Lots of people out walking their dogs as it changed from being humid and cool to getting warm. 6 K 40 minutes, nice and easy. There was a bit of complaint as I passed 5 K, but things settled down again. Rolled and stretched after.

The elevation graph is crazy. I turned around at about 3.5 K. You'd think the graph would be a mirror image, but no. 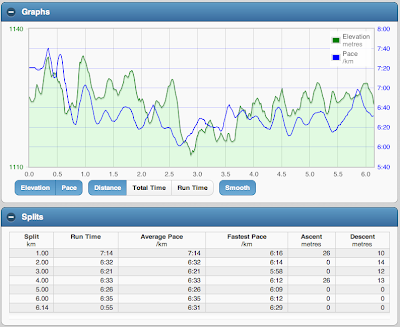