If I'd known it would be that easy I'd have filmed it.

As a followup to the Big Dance yesterday, I'd like to give a huge shout out to buddies Jill, Lorraine, and Jennifer. They all had a great race in hot conditions. As well, blog buddies Ulli, ELF, and a few other people who are friends of friends. Glad to see everybody had a great day. And what a race for Chrissie Wellington and Mirinda Carfrae! Less than 3 minutes apart over not quite 9 hours. Wondering if Mirinda could catch her. That is amazing. They both proved they are champs with a capital C. Let's not take away from the next 3 girls coming in over the next 10 minutes. I think the top echelon of female triathlete competition is going to be very interesting over the next few years.

Today turned out to be cloudy and cool, so I gave up on the outside bike ride. Sigh. Fall is here at last. Some of you may remember one particular experience last year with me trying to get the trainer tire on. I'd just as soon not go through that again, so I prepared carefully. After I got the old tire off I gently warmed up the trainer tire using a heat gun until it was warm to the touch. Then I scuttled over to the rim, and worked it on, carefully pushing in the tube and getting the tire onto the rim. I got down to the last few inches and much to my surprise the tire popped onto the rim without even having to work it very hard with my hands. I've had to push normal tires harder. So I'm thrilled!

As I said yesterday, there were no instructions in the box. I found this site with good instructions, and followed them. I could wish some of the sketches had been a bit clearer, but it all worked out. About my only complaint is in where the cords attach. The data cable, and input from the cadence sensor plug into the bottom of the roller unit. How hard could it have been to put them where they were easier to see? I was pretty careful draping the cables so they wouldn't get in the way. This might get to be a bit of a pain to take the setup to KBRCC every week. 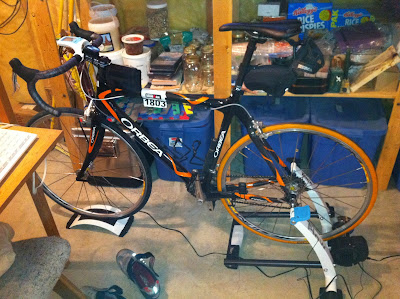 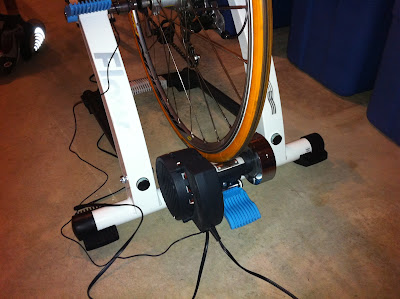 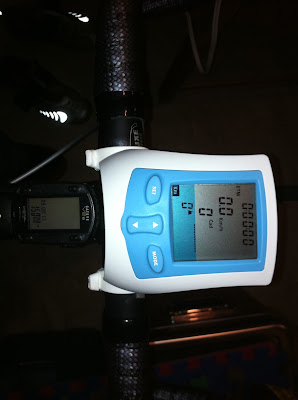 I got the rest of the computer gear on the bike. Setting up the Tacx computer was a snap! It was easier than some of the regular bike computers I've had. Even tweaking the roller tension to zero took only two attempts. Maybe I got lucky. I was up and pedaling before I knew it. The controls are pretty simple. I've got the basics mastered, and plan to take another run through them to see about some of the other functions.

My current bike computer, a wireless Cat Eye, is still hooked up, so I did a bit of comparison. Cadence was right on.  The Tacx updates quicker. The speed was about 1 Kph difference, and I forget which is reading higher. I've futzed with the Cat Eye calibration enough that I might have the wheel diameter wrong or something. The Tacx readout is huge, which makes it really easy to read. That is a huge plus for me. At the moment I've got time at the top, cadence in the middle, and watts at the bottom. There are lots of ways of tweaking the display to get what you want. I didn't get the heart rate strap, so I'm still getting heart rate numbers with the Timex.

This is the first indoor ride in some time, and during those last rides I was still having knee problems. So today's ride is a bit of a self calibration exercise. I certainly do not propose to bore you all with numbers all the time. (But I know Julie is a bit of a freak for numbers, so I'll email them to her, just to make her happy. The things I do. hahahaha! )

The incline can be adjusted from -4 to +9. After a bit of poking around I set it at +1 for most of the workout, and -4 for easy spin cooldown. The +1 seems to be about the resistance of my last trainer, though I don't think the comparison is linear.

Last year, if I was on the big ring, and in the 3rd biggest cog, I could pedal about 27 Kph, 85 to 90 rpm and find a stable place for breathing and heart rate somewhere mid zone 3. Today, same gearing, heart rate about 128 to 130, breathing deep and regular, but not gasping or panting, I rode 10 minutes, trying to stay around 190 watts. The watt figure actually moves around a bit compared to cadence, so I'm guessing that calculation happens faster than the cadence numbers update. That felt pretty good. I could keep that up longer.

I stood up for 1.5 minutes, pedaling hard, in the hardest gears, at about 245 watts, and that sure got my heart rate and breathing up. I suspect if I want to do standing work, I should change the incline settings to make it a bit harder.

Later on I tried to pick one gear harder to maintain 200 watts for 10 minutes, and made it to 7. I think I could have gutted it out till 10, but certainly not much longer. This got my heart rate up to 133 or so, and breathing a lot harder. I was beginning to feel a bit of a burn, so I backed off.

For some high cadence easy gear spin I topped out about 180 rpm, (briefly), but spent some time working around 120 to 130 rpm, where I'm getting a bit of bounce and back fat resonance, to see if I could smooth it out. This is a major improvement from where 115 rpm would have my knee screaming.

Near the end of the ride I wanted to find out how loud the trainer was. I pushed gears and cadence up till I was about 425 watts. It was quieter than I thought it would be, more like a strong whirring fan noise than anything else. It certainly would not interfere with listening to music or talking to someone. Not that I can maintain that power output very long! Linda was reading upstairs, and couldn't hear anything but the brief peak, and even that wasn't loud. I'd be able to do a spin session while Linda is sleeping.

Of course, these watt figures are only valid on my bike and trainer. I have no idea if they are comparable even to other readings from the same trainer model, let alone other ways of calculating watts. I'm just going to use them as a baseline for me, and not get too carried away about them as a number. If maintaining 200 is at the high end of my performance now, and at the end of the season it's at a higher number, then I'll know I've improved. But without knowing a lot more about exactly how much resistance is involved, and exactly how the unit calculates watts, I won't be able to say anything for sure about how much I've improved. I'm going to look up some info about training when you know your watt output. If any of you have any material you'd like to share, I'd be happy to read it.

The ride was 1.5 hours long, and felt really good. My legs felt strong, and my spin fairly smooth. The ride is more stable than the old trainer. For a first ride, I'm really pleased, both with how my knees feel, and how the new trainer is working. Anyone want a gently used basic CycleOps trainer?