A big thank you to my commenters! I call my readers a small but loyal group, and thank them for showing up. That is doubly, (at least) true for my commenters.

I thought I'd take today's blog and respond to some of the comments in a bit more detail than just putting another comment as a reply, that disappeared the one time I tried it. Which might get complicated for you, but I'll try to give the context, and will provide links.

I loved Michelle's comment about "reinventing and rediscovering and redefining" myself. I used to read about celebrities "reinventing" themselves, and thought it was publicity bunk to feed a ravenous public that only wants something new, as long as it's the same old same old. Which explains why so many movies lately are crap.

Most of us change as we grow older. Things that interested us lose their appeal. We decide we're as good as we're going to get, or it's time to try something else. Some of us are fortunate enough to be able to do this. We have the time to try something different. Perhaps more importantly, we don't risk losing anything trying something new.

Lots of people think acting is a great job, but I disagree. The competition to get an acting job is ferocious. Once you're working regularly you run the risk of being typecast, and doing the same role over and over again. Yet it's a risk to turn down paying work to try something new.

In some senses, it's a scary thing, to reinvent yourself. To decide what to do next, rather than have someone tell you what to do. I think that's why lots of people flounder in retirement. They've spent their entire lives being told what to do. Now that they've got a big block of time, they don't know who  or what they are.

Janet said "The 'bigness' scares the pants off me, but where's the fun in playing safe." Exactly! I'm curious what she's up to, and since she's not blogging regularly, it's hard to tell. Wait! I could email. We could do a video chat. There are choices.

Big is funny sometimes. Lots of things look big (and scary and daunting and all but impossible) from the outside. But once you break it down, consider the order things have to happen in, work the process, and most importantly GET STARTED, it doesn't seem so bad. It's the big goals that are worth doing. That you tell people about and they go wow! As long as you're doing because it's what you want to do, and you aren't chasing the wow. That's empty in the end because it doesn't mean anything to you.

Used for their purpose and not left gathering dust. Janice agrees with me there and sold a motorcycle she loved because she wasn't riding it anymore. As an aside I've only ever ridden a motorcycle once, for a short distance. It was fun, but not fun enough to go buy one and learn how to ride it and dodge cars.

I belong to a Facebook group that lists photographic equipment for sale. It's amazing how much of the equipment is pristine, barely taken out of the box. Used only by someone wearing velvet gloves, carefully pampered, never used in harsh light, and certainly never brushed against another surface.

I giggle at that. One of my buddies is a pro photographer. I've helped him on several shoots. His equipment looks like it's been through the wars. All of them. Parts are taped on. Everything is scratched and gouged, except the actual lens surface. I once watched him put a camera down in a puddle, on the yellow line down the middle of highway 3, in a rainstorm, with a truck coming, to catch a double rainbow. The shot is awesome. There's a shot of another pro photographer that looks like he's climbing out of a hole. His camera and lens looks like it's been used as a piece of rock climbing equipment. But they get great images!

My own stuff looks used, because it HAS been used. About 120K shots and counting so far. In the rain and snow. Put down in the dirt and on tree trunks and kissing puddles for the reflections. Carried on beaches out in the blowing sand and salt air. Up the Dempster highway. Yes, a camera and good lens are carefully engineered precision pieces of equipment, but they're a lot more rugged than most people think.

Janice wasn't sure why she liked the tree photobombing shot in 18.2 K of ribbon. That's one of the fun things about showing photos, is that you never know what people will like. At first I was all, that tree is right in the way of the shot, and moved to shoot around it. Then, just as we were about to leave, I realized that the water framed the tree nicely. Click. I'm glad someone liked it.

Do I need to tell the resting bitch face story? Sure. I was playing paparazzi to a buddy at a triathlon. She knew I was there, I'd shown her the camera and said be dramatic. She struck a heroic pose and flashed her sports bra. I caught her a minute later looking for her team mates, and let's just say I didn't think it was a flattering shot. She was coming over to look at the shots, and I wondered if I should even show it to her. I did, holding my breath, and she loved it! She called it her resting bitch face, and wanted a copy to print. So now I say to myself, resting bitch face, and let the chips fly.

And yes, I'd love to do some photo rambles with a local in Nova Scotia. Preferably fall, but anytime will be good. Lets see when it's safe to travel again without having to go into quarantine.

Throwing out reference works. Sean recycled 18 inches of Oracle reference manuals. It's funny what we keep. Back in the day I read the various computer magazines, and a stack slowly grew in the basement. Then one day I was trying to make room for some books and realized there was no earthly reason to keep those magazines. None. It took several trips to hump them up to the recycle bin.

Too often we define ourselves by our possessions. Consumerism is drilled into us at every step of our lives. Buy more toys. A bigger house. Fancier car. Our basements and garages gradually fill up with stuff. As I've run through my neighbourhood I see many garages so full it isn't possible to park a car in them, which is the primary purpose for a garage. And how often does it get used?

I remember that IKEA lamp commercial! They nailed it! I'm not a big fan of advertising, but when it's done that well you have to applaud. There was a podcast on CBC (I think) of two sisters cleaning out their parent's place after they died. They had a short timeline, starting with a full house and an empty dumpster. What made it difficult was their parents coming to Canada with almost nothing, and treasuring everything they got, especially reminders of their home country. One can understand that. Yet it was hard for their children to throw things away, that they knew their parents treasured, that they didn't want and had no real value or use now.

It's always interesting to see how other photographers approach a scene. Sean and I are discussing an idea coming out of our hike. Stay tuned. Even getting their input after the shot is taken, edited, and displayed is interesting. Most people that commented liked the wider shot. Sean, who marches to the beat of a kazoo sometimes, rejects the binary choice (which is a very funny thing, if you consider the Oracle reference manuals) and made some other suggestions. I actually went back to the original shots to see if I had any others of it. I do, but I don't need Sean to know they are banal.

I'm trying to get better about evaluating a scene before shooting, but sometimes the shot seems so obvious, and the light so fleeting. Except. Except, that's likely the obvious tourist shot. I'm trying to find the other more interesting shots. This sometimes means taking insurance shots, or just in case shots. But if you're going to do that you might as well just shoot all the angles and make the choice later. There's a technical photographer term for this approach. It's called spray and pray. I try to avoid it.

So that turned into a great big long wall of text. But part of the richer relationships is conversation with other people. A blog, with comments, and responses, can be a bit of a disjointed conversation, but it does tie together a wide spread community of people that might not otherwise meet. At least two people on the east coast. One on the west coast. Several here in town. Different professions. Some retired, some working. Thank you all.

Some photos to reward you for reading through the wall of text. A pairing of flowers. 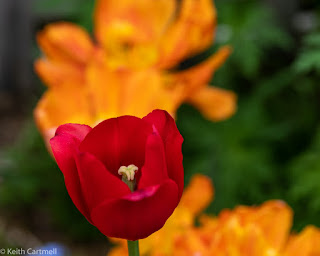 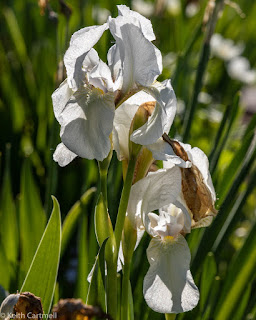 And the very opposite of flowers,  rocks. 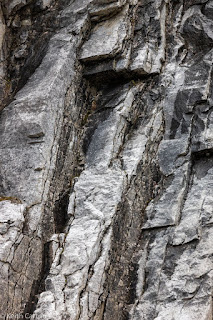 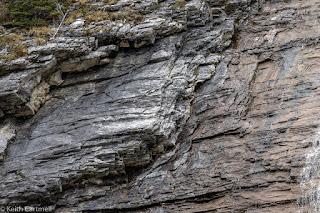 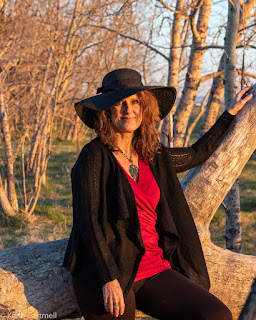 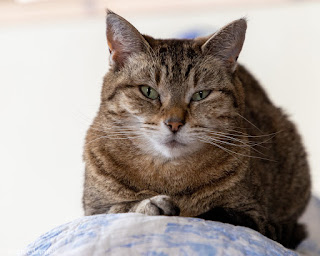 Flower. These two clematis were rescued from the back fence a few years ago when we redid the back yard. We didn't know if they would survive because they were chopped back pretty good. They sulked the first year, but have been going gangbusters ever since. 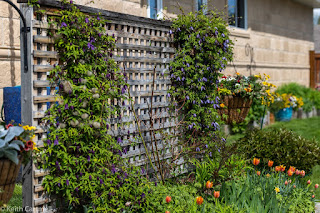 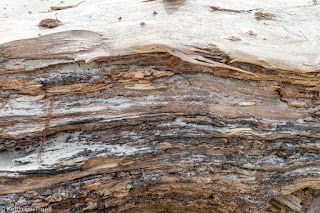