Too soon to talk paradigm change?

Momentous events have a way of changing the world, whether humans want it to change or not. There's a saying, "Science progress happens one funeral at a time." and it's true in other human endeavours.

Big surprise, the wealthy and powerful like the world they have created for themselves. Consider this in reference to Mayer Rothschild; "He never paid his employees a farthing more than was necessary for their bare subsistence, or at least not a farthing more than they could compel him to pay." George Armstrong, "The Rothschild Money Trust", 1940, pg. 26" That is the essence of labour negotiating, and anyone who thinks otherwise is a fool.

I like that quote better than the alleged; "Let us control the money of a country and we care not who makes its laws."

Sickness, pandemics, epidemics, and their ilk don't care about the status quo of a person, a nation, or the world. They don't care how rich you are, though they find it easier to prey on the poor. The viruses and illnesses just do their thing. Mother Nature at work. Things change during and afterward.

The Black Death essentially led to the end of Feudalism. Spanish Flu created the desire for Public Health programs to prevent a re-occurance. What will the fallout from COVID-19 look like? Is it too early to start thinking about that?

Pollution has started to clear. People in Indian cities are seeing blue skies again. Demand for gasoline is dropping like a rock, and the price is reflecting that. Fish are being seen in Venetian canals. That's all to the good, if you value a clean world, but I don't think anyone would say quarantining millions, possibly billions of people in their homes is the optimal way of going about it.

There's been discussion of a basic income, and the main argument against it is that it is considered a disincentive to working. Well, given the number of people who are breaking quarantine to go to work, I don't think that's the problem it's made out to be. People want to be doing something. Preferably something useful. Look at all the people that volunteer their services for various causes. How many more of them could happen if people didn't need to worry so much about making rent and grocery money? If they didn't have to worry about living in a cardboard box under a bridge in their old age if they don't save enough? What if there were enough volunteers would could do it because they got a basic income, because they loved doing it, that it would disrupt a predatory business trying to get rich by forcing the poor to work for them?

The billionaires will protest, of course. If people had some choice, some fundamental economic backstop, they wouldn't be forced into low paying dead end jobs. They might not have to prostitute themselves. They wouldn't have to put up with abusive employers.

Why is it that the rich protested so much about a $15/hr minimum wage? For many CEO's, there isn't a unit of time fast enough to express how little time it takes them to make $15. That $15/hr minimum wage affects all employers equally, so nobody gets a competitive advantage, or more to the point, a disadvantage. They can raise their prices a bit, and the consumers won't really notice. They go to the places that serve the food they want to eat, not the cheapest places.

There is much angst in the right wing commentariat about the oppressive hand of regulation and how cutting red tape frees up the economy. Yes, frees up the race to the bottom. This has been demonstrated many times. Some demonstrated winners so far were the Chinese companies putting poison in powdered milk and toy paint. For an example closer to home, look at the meat packing industry of a century ago. It's like the rich and powerful want to go back to that, because they can afford meat that's properly processed.

After the Depression there was a New Deal, one that was fairer to ordinary people. The result was an enlarged middle class and increased social mobility. The wealthy have spent the lifetime since trying to roll back those changes. The result? The upperest fraction of the upper 1% have most of the pie, and it isn't enough for them. They want it all. If the game goes on long enough we'll end up with one person or family that owns the world, and the next wealthiest have some crumbs, and everybody else has nothing. Something has to change.

What does a New Deal for 2020 look like? I'm not too sure of the details, but I think the key is that it has to work for everyone. I mean everyone, including those that get overlooked now. I'm mainly thinking of disabled people, the homeless, those nursing chronic conditions including substance abuse, First Nations people, the injured, immigrants, refugees. There's more to it than just the economy measuring how much wealth has been funnelled to the already rich through stock market manipulation. When they bleat in protest, remember that equality, to them, looks like discrimination.

Is a Canadian CEO really worth more than 200 times an average worker, and many more times for a minimum wage worker? Consider than on January 2, the top CEOs have already earned what an average worker makes in a year. Who is more important, that cleaner in a grocery store, or a fat cat in his office?

Think about how badly some of those CEO perform, and you wonder why they get paid so well. It's a become more than a bit of a circle jerk, boards paying CEOs more to attract 'better' ones, and board members wanting to become those CEOs, or CEOs retiring to a board to push the circle around to a younger buddy who has blown them, I mean kissed their ass, I mean sucked up. You get the idea. If you are "one of us" this gravy train is your expectation. Went looking for a video clip of Yes Prime Minister explaining the 'one of us' concept and got sidetracked.

As a quick political hit, is there anyone that thinks Premier Kenney is doing a good job? He just laid off 20,000 education workers to save $120 million dollars, and funnelled Billions to an American corporation. The right wing at work.

1. I sometimes think this is the view they bring to the world. A sculpture near a scenic lookout in Port Chalmers. 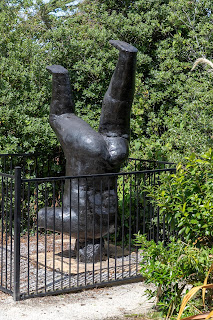 2. A reflection from Nanaimo. The bottom of that puddle was gross, but really, all you can see is the lovely trees. Another metaphor for our society? Hmmm. 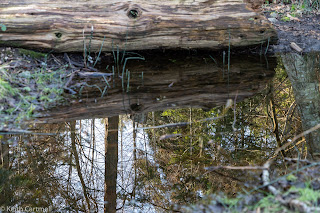 3. A micro-landscape for you, but I suspect the rocks aren't going to grow. The moss might. 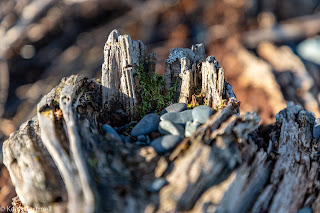 4. A rock and sand pattern. 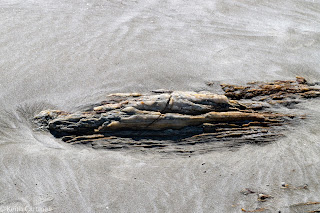 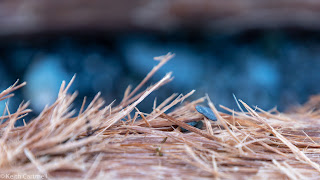