I suppose I could look at our calendar to find out which day of isolation it is. But I don't really care which day it is. Life goes on. Photo editing. Reading. Working on novels. Watching Big Bang Theory in the evenings lately, except last night was a video chat with the community association executive.  Overall it's generally been pretty much like my regular retired life. Not bored yet. Nobody here that I know of is wishing for a retroactive option B. Well, maybe the cats.

The couple cm of snow yesterday and last night was a bit of a downer. That's one of the reasons we went away, hoping to avoid the whole darn thing. But then, I guess if you totally want to avoid snow in Calgary, you'd have to live somewhere else. New Zealand is nice this time of year.

The following the news thing has been getting a bit out of hand. We all knew the numbers of infected people would explode, and it has done so. All too soon, the number of people dying will explode too. The headlines are filling up with the deaths of known people, as if they are more important than all the other people who are dying of COVID-19, and all the other causes of death that are not taking a vacation.

Which brings to mind the TV series, Dead Like Me. If you don't know it, a small but plucky group of reapers try to take the souls of people about to die. It turns out they are the unusual deaths division, and are pretty busy, given that human stupidity never rests. They get told who to reap via a sticky note with initial and last name, place, and time. In one episode while awaiting their scheduled death, they are watching a group of old guys playing Bocce Ball and looking bored. The leader the of the reaper groups says, "plague division, I hope they never get busy, because we get even busier." Or something like that. It's been a while since I watched it. You know of some of the people in it, like "My name is Inigo Montoya...", Dr Fraiser and Sgt Walter  from Stargate, and Dr Will from Sanctuary. IMDB is my friend.

The editing goes apace, though I can only go so long. I found yesterday I'd made a mistake and it got applied to a bunch of photos. Going back and fixing it was just as difficult as doing it, provided it's done very carefully. I'm just starting to work on March 13 (cave day) and have 5 more days after that.  That's 442 photos to look at. Maybe I'll go wild with some of the cave photos, and set the editing sliders into new and unknown positions, just to see what happens.

As a further informational thing, the photos not blogged in 3 months folder now has 971 photos in it. So having a choice of photos for the blog is not a problem. Deciding which, and why, is a different problem.

1. Taieri Mouth beach. I didn't have to wait for people to clear out of my shot. I like having an island to break up the horizon line. This is the first one where the sand dunes got interesting, and started trying to include them in the driftwood shots. Editing sand is trickier than it sounds. 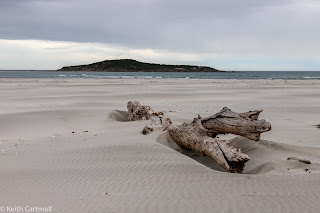 2. And another for you. Brighton Beach. 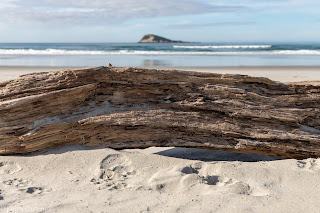 3. You tell me, rock or driftwood? 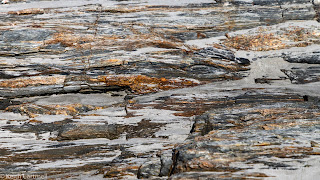 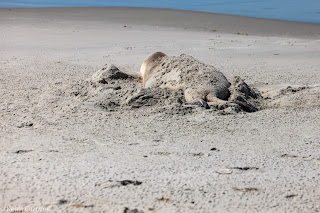 5. This is why I want a model to roam beaches with. Without her the shot is so boring I probably wouldn't have taken it. But she was the only other person on the beach beside me and Linda, and watched carefully as she wandered along. When she started scrambling along the rocks I held my breath. I couldn't have asked her to pose more nicely, and yet we didn't even wave at one another in passing. Thank you anonymous lady! 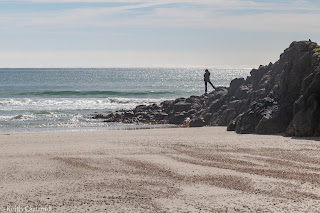 6. I finished this the other day. If you like honest British mysteries with a bit of a twisted sense of humour, you'll like this. You know those movies where the actors are making it clear they know they are in a movie and enjoying themselves? Yeah, that's what this book is. 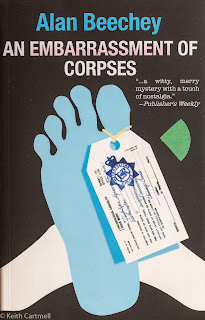 Driftwood of the Day
The rusty metal found in some old wood can be interesting. 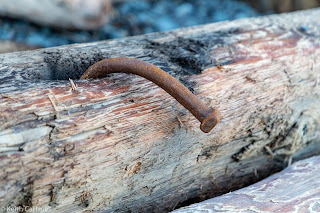