What you already knew, but choose not to think about

None of this is a surprise to me, and ought not to be a surprise to anyone. Any rational adult knows that the reasons politicians give for doing something are never the real reasons. Not ever. They might be on the list, probably towards the bottom, but the real reasons are most likely to be money or influence, and both are intimately connected to petroleum.

Foster is a Canadian who has worked as an oil economist for more than 40 years, with stints at the World Bank and BP, among many others. He connects up the various dots and makes it clear how the value of petroleum has influenced geopolitics for more than a century. The breakup of the Ottoman Empire after WWI is still influencing our world today.

There are no good guys to cheer for in this story. The USA has been particularly despicable in setting up a system that favours them, and makes it easy to bully other countries. How do you tell which election annoys the US military industrial complex? See who they're calling a bad guy. Most this is people or parties elected on the basis of taking care of their own country, and standing up to the USA. Many of them get pounded back down again. The list of such is much too long for this blog.

It's interesting reading if you like knowing about the political manoeuvring behind the scenes, though it's enraging know that millions of people have had their lives destroyed by the fantasies of those in power, dreaming of a takeover to take possession of "our oil". Yet it goes on, mainly because everybody needs oil, and either cannot stand up to US pressure, or they want to become part of the game.

Canada is in a funny position on this. We have vast quantities of sludge that can be turned into useful oil products through extensive processing. Transporting it elsewhere is difficult due to pipeline limitations, and has always had a discount from the world price because of that. The rail solution is second best, but we were moving a billion dollars of oil a year, until Kenney cancelled it for ideological reasons, mainly that he can't admit the NDP did anything right.

We also have a historically close (though fraught at times) relationship with the USA. Quite frankly, they don't need to invade us; it was easier to just buy us. Canadian businessmen have been all to willing to sell, taking the money and moving to something else. There are days I think we're like a beard to the USA. Being nice to us disguises their true actions. 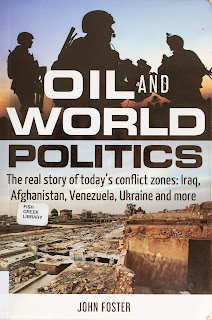 Foster does not get into what is to be done about it. Billions upon billions would be required to rebuild the states destroyed by the USA. There is no leverage on them to provide it, and many of those countries would resist US firms coming in to do the rebuilding.

Climate change is driving changes to petroleum usage, though there are still deniers trying to carry on as usual. It is uncertain how all that will turn out. 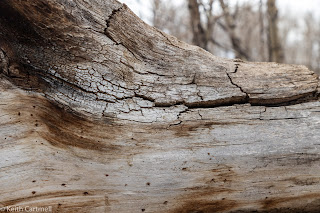