Thinking quietly amid the snow

Yes, more snow. Just as the last batch melted more came along. We've got about 5 or 6 cm sitting on the stuff in the back yard. The roads look sloppy. I'm glad I don't have to go anywhere.

It's nice to have a quiet day after another busy period. I'm thinking through a bunch of things here, some of which may or may not interest you.

Political stuff
Where to start. Many Canadians are totally gagging about this election. Trudeau and Scheer are the only two possible people to end up as Prime Minister, and most of us gag on both, for different reasons. My Facebook feed is full of comments from people incensed by Trudeau's various actions, many of which are small potatoes in the great scheme of things. The brown face thing seems to be taking top billing, but if the people with brown skin, with Mayor Nenshi being the most prominent example I know of, aren't particularly upset, why should I be? There are bigger fish to fry.

In my mind, those fish include Scheer's troglodyte social views. He voted against gay marriage, thinks conversion therapy is a thing, is against LBGTQ rights in general, and has spoken against abortion in the past but doesn't really clarify his views. He seems to be trying to have it both ways.

Both are leading parties that are spending money like drunken sailors trying to buy votes. Both are not paying much attention to climate change.

That's the big picture. In my riding a guy named Bob Benzen is the Conservative incumbent, and I'm guessing he received the previous incumbent's blessing. That would be Stephen Harper, you might remember that name. His signs are all over the place, I've seen him door knocking, and my neighbour say's he's personable. Of course he is, all successful politicians are personable in small group encounters. Underneath many of them are reptiles at best.

I have to admit he is the overwhelming favourite to win. This is a very conservative riding, and he has all the advantages of incumbency. I can see where it's tough for an opposing candidate to put themselves forward; they are likely to lose their deposit because they get such a small percentage of the vote.

The Liberal candidate is the same guy as last time, Scott Forsyth. I have seen no Liberal signs, and no web activity from him, just Liberal placeholder stuff. No idea what's going on there.

The NDP candidate is the same as last time, Holly Heffernan. Not much info about her is available, and seems to be another placeholder.

The Green candidate is Allie Tulick. She at least has info available, and was active in making some changes to the Ring Road near here to protect watershed, and saved some tax dollars while doing it.

There is a new party on the block, the People's Party of Canada with candidate Stephanie Hoeppner. For a while she was looking like the only possible protest vote, even though her party was formed because they thought the Conservative party wasn't right wing enough. Last time this happened it was called the Reform Party.

Last, and least, is the perennial CHP candidate, Larry Heather. He is a nut case who deserves no further attention.

So, who do I vote for? I still think Harper was the biggest threat to Canada yet, and we are fortunate to have survived him so far. I am not inclined to reward his underlings with my vote. The Liberals lost my vote when they bailed on their proportional representation promise. The Dippers, hmmmm. It's heresy to say it out loud in Alberta, but I think Rachel Notley did pretty good with the hand she was dealt. Some observers think that Jagmeet Singh did as well as could be expected in the debates, and might be a coming thing.

So now we're into protest vote territory. Actually, in this riding, anything but conservative is a protest vote. As a general rule I don't want to vote for old rich white men. Old is anything over 40. Yes, I know, many people would think I fit that demographic and they're mostly right. What I hear from some people I know just appalls me. Us boomers have been running things long enough.

In several recent federal elections, party funding was driven by a formula related to votes. Each party got $1.75 I think it was, each year for each vote. That isn't happening anymore, but I thought it was a great idea. I cheerfully supported Greens because I want to see more attention paid to environmental issues. They aren't ready for government, of course, but then neither are any of the other smaller parties, and they are in no danger of having to do so. The Greens dream of holding the balance of power in Parliament, but I think that's all it is.

How do I want to see it end up? A weak Liberal government, with each of the Conservatives, NDP, and Greens holding a bunch of the opposing seats. How do I think it will end up? Nobody knows. The polls think popular vote is essentially tied, but the riding breakdowns seem to favour the Liberals. The Greens are projected to take perhaps 10% of the vote, but if they get 1% of the seats they'll be doing well. Which is why I want to see proportional representation.

All I can say about the whole darned thing is please get out and vote! Preferably not for some boomer who will give us more of the same, but it's your choice.

Well, that got long, but it got me noodled through figuring out the election. More thoughts tomorrow, if I'm still thinking them.

Some photos to cheer you up. Bleriot ferry. I'll bet you didn't know there was a ferry in Alberta. This is the view on the other side of the ferry. I love the layers. 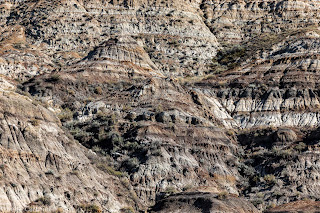 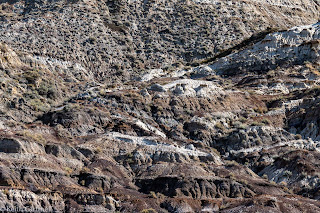 The humorous photo of the blog today. I won't tell you who was in the Orkney Lookout washroom at the time. 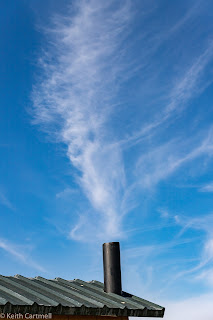 Lynx of the Day 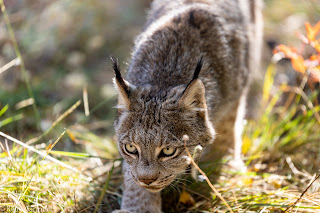 Texture of the Day
I'm still thinking about the title for this feature.
Somebody put a nail into this tree. Then the tree fell over. I'm sure there are other events related to this, but they are lost in the mists of time. 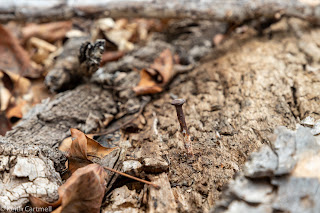