Last week a Winnipeg bus driver was assaulted and killed. A government cabinet minister rose in the House of Commons to pay tribute to him, and was laughed and jeered by the opposition Conservative members, because he mentioned that he had once been a bus driver as well.

This is disgusting on several fronts. It shows the mind-set of the Conservative MP's, that they look down on those that do what they consider menial work. That they will seize on anything to mock those opposed to them and their elitist agenda. In spite of their law and order mindset, they don't appear to see assaults as a problem, unless it happens to people they consider important. Like the wealthy.

They pay lip service to "hard working Canadians" but that's only to cover their disdain. There are any number of job titles that are considered menial, done by those hard working Canadians, and most of them are turning cranks that help keep our society going in one way or another. They provide services that we all rely on.

Let's start with bus drivers. "Anyone can drive a bus," they say. "Them and their gold-plated pensions, fire them all, there's lots of people willing to work for half what they make and no pension," they say. Lots of people demonstrate daily they are not capable of safely driving their car, and I wouldn't let them try a bus if it was mine.

Bus drivers often work an even crazier shift than I did, being needed during rush hours, but not between. Transit starts early and ends late. It's not like they can do their job with their eyes half closed, like I might have done a few times.

Here in Calgary transit sometimes runs 24 hours a day. Tens of thousands of people rely on transit to get to work and home again via transit. Imagine how clogged the roads would be if all of them had to drive? Mercedes man from the BRT fracas would be losing his shiz.

So there you are, a smart adult, driving a bus. Now think about the schedule. It's published, and both the customers and transit officials expect it to be kept to the minute, day in and day out. There must be allowances for weather and traffic but I don't know the details. I don't want to know the details, but I'm happy there are people paid to do that.

My days are loosely scheduled at best. The days I don't work I can do what I want, when I want. On work days I get into work when I get there. I can take as long for lunch as I want, and I can leave when I want. I bill by the hour, and there are things I've committed to get done. Bus drivers have that minute by minute schedule, dealing with both wonderful passengers and the abusive ones. I wouldn't want to deal with that.

I was charmed during our visits to Bermuda; one is expected to greet the bus driver upon entering. One kid didn't, and an older woman sent him back to the front to apologize. The drivers often put their name underneath a sign that says, "Your professional driver". They are a vital part of the fabric of daily life. A little more decorum here would be nice.

What about the people that pick up garbage every week? It used to be men throwing bags into a truck, now it's people driving trucks with those remote control arms to dump bins into the truck. Does anyone think that removing garbage isn't an important task?

What about a heavy equipment operator? Have you seen the cab of a belly sander? You've got to drive the truck, operate the plow over a variety of road and weather conditions, and operate the sander mechanism, and deal with whatever paperwork is involved to track what is being done. I wouldn't want to deal with either of those, or many other jobs.

There are any number of jobs done by what used to be called white collar workers, that are utterly essential to society. They are the key to money and services flowing back and forth. Lots of people think they earn too much money and can be easily replaced. They should try it sometime. Even the non-professional level jobs have detailed procedures. Ask Linda about the details of what she does sometime. Get a big cup of coffee because it's going to take a while.

Once upon a time I operated a waste water treatment plant. Some would call that a menial task, but other than the shift work the job itself was interesting. And as essential as any other, unless you like dying of cholera, hepatitis, dysentery, or lots of other diseases from not treating human waste properly.

I'm not going to list other jobs and why they're important.  It would be a long list, and the importance of each should be self evident. Unless apparently, you are a Conservative MP. I suspect those Conservative MP's would consider any job they don't have as menial.

Then there is the on the job behaviour of MP's. No other workplace would tolerate such heckling and demeaning of fellow workers. The elected officials in our government represent us all and have an important task. One might disagree with others, but they should be able to debate each other civilly, using facts and logical arguments. They should show the reason why they are addressed as "the honourable member" from whatever area. When you treat people as though they have no honour, you are really demonstrating you have none.

We live in a world of complicated relationships. When we drive anywhere, we are dependent on the skills and cooperation of every other driver near us on the road. We trust our devices to give us turn by turn directions to a place we've never been before. We rely on published schedules, and believe Mrs Google when she tells us what time that business opens or closes. We trust the people that make our cars and airplanes and a million other manufactured items have done their jobs properly. We trust that the waiter will bring the gluten free bun instead of the one that will make you really sick. We fill out a form on line, including a credit card number, and that kicks off a chain of transactions that results in a product being manufactured in China and shipped to your door via a complex transportation web, usually within a few days.

Consider that person you just dissed in the coffee shop because they have brown skin, or are wearing a turban, or don't speak good English, or are taking too long to make up their minds, or smell different, or aren't dressed well, or WHATEVER, that that person might involved in one of those complex transactions you rely on. Maybe they calibrate complex avionic instruments. Maybe they write the software for your favourite app. Maybe they drive the bus that takes your kid to school, or the taxi that takes you to the airport.

Maybe they are a janitor that keeps your office clean or some other task you think makes them 'beneath' you. There is a photo of then President Obama fist bumping a janitor. If he can, you can smile and say good morning, and grant them the respect due another human being.

Soapbox packed away until next time.

The swim groove is coming back, and my hams and quads are less cranky.

Lastly, another reflection photo from the other day. Yes, this is what I intended. 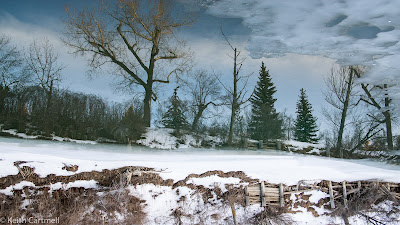