There are a couple ways of doing macro shots. One is to mount the camera on a rail, mount the rail on a tripod, carefully (oh so carefully!) set up the subject in almost the right place, set up the lighting, and then play with the rails to get the subject in focus. Remember, the lens I'm using in this method does not focus, I have to change the magnification, or move subject or camera. This isn't what you'd call easy, but I'm in control of all the elements and it just takes patient adjustments to get the shot. At higher magnifications the plane of focus is extremely narrow, so moving the subject a fraction of a mm can dramatically change the shot. If you're trying to focus stack, this is essentially the only way to fly, unless you're really really good and lucky, and have specific software on a computer capable of chewing through the number of images involved.
Another method is to carefully stalk your subject in nature, and hope it holds still long enough for you to find the focus and get your shot. There are likely to be lots of shots, firing just before its in focus, slowly moving in or out while still firing, and hope that one of them is in focus. Except that your subject is likely to move just before you find focus. This method is how I got the shot of Travis (you looking at me?) the Bee.
Another method  is to set up the camera and lens in advance. Decide what magnification, f stop, shutter speed, and ISO to use for the conditions. Preferably settings that give you a bit more depth of field, and the fastest shutter possible. Then experiment to get the distance between the front of the lens and the focussed subject into your brain. Why not fully auto? The camera isn't fast enough and wouldn't focus on your subject. Go forth, stalking your subject, prepared to fire off thousands of shots in a short time. Don't look through the viewfinder or live view; just remember the relationship between subject and camera. The technical name for this approach is called spray and pray.
That second approach might take hours of stalking with only a few shots, many of which are not likely to work out, even taking all that care. The third approach can fill up even a big memory card in a few minutes. I once filled a 32 GB card (~850 photos) in about 10 minutes. Maybe 10 of the shots had something that was recognizably a bee, and I think I got 3 shots I considered editing, and in the end only saved 1 shot. Consider if I took 850 shots at a triathlon or community event, at most I'd totally blow a couple dozen. The rest would be me picking through ok, good, better, best.
I haven't done much handheld macro shooting until just recently. Like swimming, it's really easy to lose your groove. (I'm almost afraid to get back in the soon to be reopened pools, for fear that I'll have to take swimming lessons or be harpooned by the pool staff, thinking they've got the great white whale.) Here's the best of the freehand macro shots just lately. The first shot is with the 70-200 zoomed way in, the rest are with the 100 mm using extension tubes, and some cropping. That's the first step towards getting tuned into The Beast, which is what I call the MP-E macro. 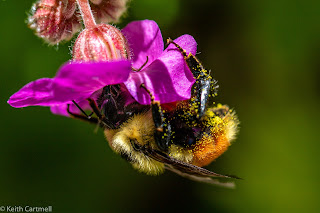 I'm actually experimenting with the red peony, working to capture the actual colour much better and get some of the detail in the unfolding bud. The ant just wandered into the scene. 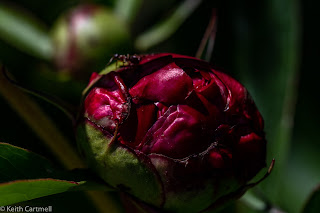 These two photos are taken within the same second. The camera can shoot about 6 frames a second, and these photos are at 1/1600 of a second, so of course the wings are blurred. Look how much the bee moved in that tiny fraction of a second. 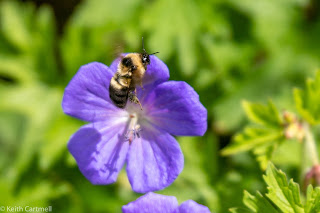 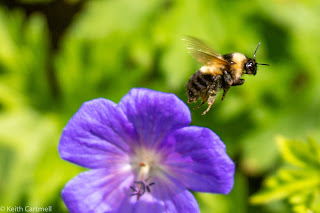 I wonder what they're saying to each other? 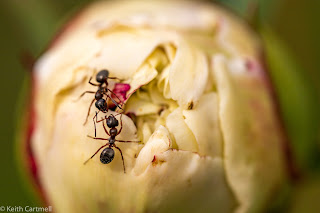 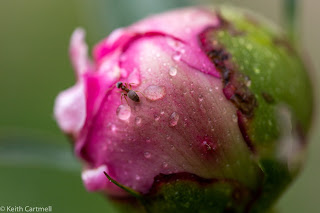 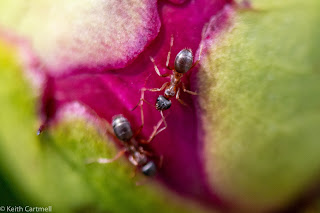 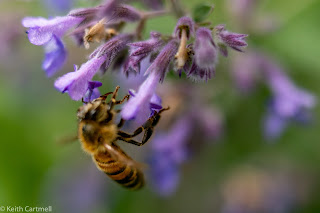 I am deeply saddened that none of the many shots I took of the black and white bumble bee turned out. I thought it looked very elegant and will have to keep an eye out for it.
Of the Day
Driftwood 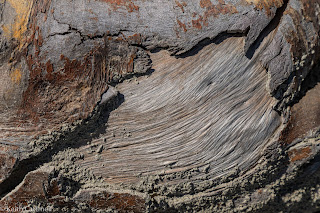 Flower
A future serendipity for the flower of the day! Same file number and normally it would be blogged as a driftwood shot, when I got there (This is from April 2020). But you get it now. 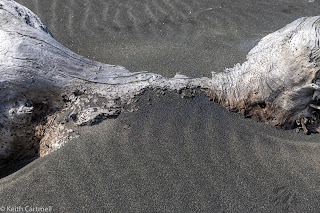 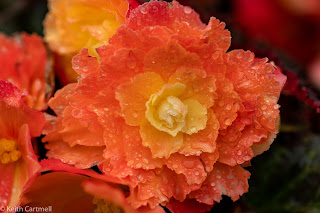