June Image of the Month

That was quite the month for photos. 3376 photos if I believe Lightroom, and 1300 of them were on the same day. The white peony was the main star of the month, putting on a great display of blossom. The red peony was trying hard as well. The roses are just getting their stride at the end of the month, and none of the big lilies have shown up yet.

Not counting the mass edit and export for the Wild Rose tri, I edited 163 photos. Those get 3 stars, just because. (1 star is during my initial pass to mark things to look at again to figure out what to edit. 2 stars is a no brainer to edit.)

4 stars are what I think are really good photos, and a 5 star one makes me go WOW! The problem is that my standards are going up all the time, and to some extent the ratings depend on what other shots happened about the same time or my history of similar shots.

An example here is the shot of Mr Travis Bee I got last August. (As a bonus you get a smoky sunset and a lovely red begonia.) That is a spectacular shot, and I might not get a better bee shot in the rest of my life as an active photographer. It affects the star rating of every bee shot now. There are lots of photos getting 3 stars now that would have been 4 or 5 stars a year or more ago.

This month has 34 photos with 4 stars, and 11 of them are the white peony. Again, there are some really nice shots, so that makes it hard to judge the rest. Here's a screen shot of the contenders. Some of them will be new to you because they haven't made it to my blog yet. If there's any in particular you want to see, let me know. (Oops, 7 MB image, if you're concerned about your data package usage.)

Number 13 has a blue background as a marking for something I did. Don't worry about it. Like, or don't like that image just like all the rest. There is no one stand out shot for me right now. Maybe tomorrow I'll look at these and wonder if I'd lost my mind, and the next day I might pick something else.

I always like it when I see the shot in my mind, then get it in the camera. The second big plant leaf with the blurred background is one of those, as is the blue geranium. The red tulip near the beginning of the month was a regular favourite. I'll stop now, I can say something nice about all these photos, they wouldn't have 4 stars if I couldn't.

So here we go.
2nd runner up, the red peony. It had rained overnight, and I was loving the raindrops and the red in the morning light. 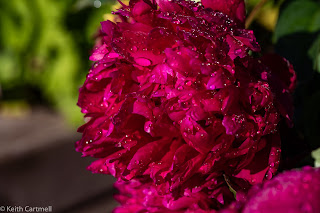 1st runner up, a rose. I was working on putting the blossom between the camera and the sun, and many of them turned out well. It was this or the geranium from the regretted post. 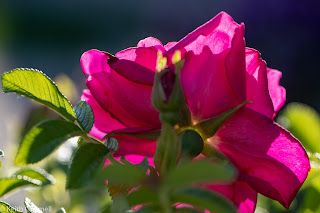 And the winner! I knew it would be the peony, the question was which shot? Another morning shot after an overnight rain. 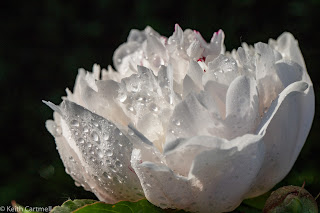