June Image of the Month

That was a huge month of photography for me, one of the biggest ever in terms of photographs taken. But out of the 14,246 that ended up on my hard drive only 763 qualify for IOTM consideration. Several hundred were deleted along the way for being out of focus or so badly exposed I couldn't use them. The vast majority of the photographs were for Green Fools, and and I don't consider client photos as mine in terms of image of the month selection.
I had lots of flower shots, and some experimental film shots, but not much else in June. That all boiled things down to just a few to think about. As an aside, on July 1 I got a great peony shot that would easily make Image of the Month, if only it had been open like that, and I'd caught it 24 hours earlier. But I'm hoping to get even better peony shots in July. Stay tuned.
So to the selection. Usually I do 2 runners up, and the winner. A few times I've done just a winner. In another variation, today I'm going to do one runner up, and the winner.
1st Runner up.
Michelle on Kodak Gold 200 film, with the GW690. I'd been hoping to get the petals of the tree a bit more out of focus. This was taken during the Ukrainian walk we joined. 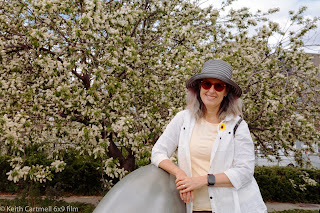 Winner
A tulip that most people would say was past it's prime, and yet, the colours are often more intense, and I find the twisted shapes much more interesting. 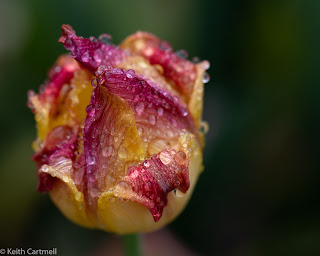