I do know better

I haven't been on Twitter for years. I bailed out when I couldn't take the rage and stupidity any more. I had a bit of extra time this morning, but I made the mistake of following some news links. Only did a couple of them, and then realized my blood pressure was going up. Out of there. Again. I knew better since they were sort of click-baity. The rule 'never read the comments' is beginning to apply to the news as well.
Here's a red peony photo to soothe you. Yes there are film versions in the works.
1. 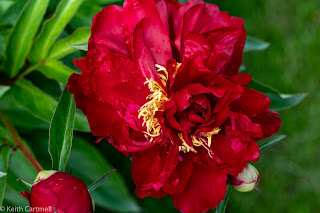 The Dunning-Kruger effect came strongly to mind. It should be easier now to find out what is true than ever before. We have easy access to more information than we know exists. Part of the problem is that many people are really bad at critically evaluating information. And bad at evaluating risk. Even bad at evaluating their own self-interest.
A bigger part of the problem is that people who in fact are good at those tasks look at the proposition of running for public office, and decide, (correctly, for the most part) not to do it. The odds of success are not good. Even if actually elected they still don't have much influence on the outcomes. They can probably make more money more easily doing other things that are probably more enjoyable, and avoid the stress of dealing with people enraged over something you have no control over.
That opens the field to people like Trump or Kenney running for office. They know how to project an image of competence, but what they are good at is recognizing and pushing people's hot buttons in ways that get them elected. Trump is really good at it, whereas Kenney is more a back room operative, working hard in lots of small ways to influence people. Both cheated and broke the rules along the way to getting elected and trying to stay in office. Both disgraced themselves and the office they held, though neither has any concept of shame. That seems to be a prerequisite for being in public office now.
A simple example. There are lots of people, particularly in Alberta, that are worked up about Trudeau and the Liberals wasting tax money. It drives every other voting consideration out of mind. Now, as an aside, it's trivially easy to find examples of wasted tax dollars in any government. Mistakes are made. The situation changes so what looked prudent at the time looks foolish in hindsight. Sometimes the cost of controlling some issue, or the effort of finding it in the documents in the first place, is more than the issue costs. There are no end of scams and boondoggles that people try to get money out of the government, and sometimes it works. But ask them which Canadian Federal government has the best record for running a surplus and reducing the debt, and they flat out won't believe it's the Liberals under Jean Chrétien and Paul Martin as Finance Minister. They are so worked up about it that they can't admit or even see the facts. Graph below based on Statistics Canada, source here. 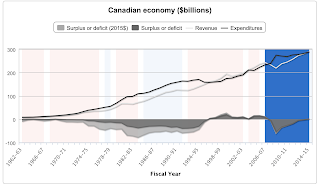 Harper only ran a surplus at the end of his term through accounting trickery. I couldn't find this graph that continues into the Trudeau years, but strongly suspect there's a big dive into the red. He was elected in 2015, and COVID happened in 2020 which is where a huge rise in expenditure happened. I'd like to see the numbers for 2015 to 2020. So yes, like most other Prime Ministers, Trudeau is running deficits. No, the Canadian budget is not remotely like your household budget.
How do we know what is true? This question has been written about since writing was invented. The problem is that truth is a slippery concept. The world is far more complex than almost everyone imagines. What was true then might no longer be true because of advances in technology, or new evidence being discovered. Anybody that tells you there are simple and eternal truths (usually spelled with a capital T in this context) is out to scam you.
Take a simple thing like letting go of some object. What happens? In almost all cases it falls down until it hits something. The exceptions mostly relate to the object being lighter than air, such as a balloon filled with helium. Or maybe the object is tied or glued to your hand. There might be other exceptions that don't come to my mind at the moment. How fast does it fall? Well, that depends. Air resistance might or might not play a role, depending on the object and the accuracy of your instruments. What path does the object take, relative to your hand or the point of impact on the surface? Again, that depends on several things. What happens when the object hits some surface? Again, that depends on the object, and the surface it hits, and maybe how far it's fallen. All that assumes you are somewhere in Earth's atmosphere; the situation changes dramatically if you're under water, or in space.
Given sufficient information about the context, there are people that can explain in detail what will happen, why, and do the calculations to describe it exactly. Given less information, it's pretty safe to assume the object will fall straight down and something will break when it hits a surface. Now imagine someone that has (somehow) only seen objects fall upward, arguing with someone that can do the math involved with falling objects. It ought to be pretty easy to decide which to believe. You'd think. It doesn't matter how sincerely the one of them holds their belief that objects fall upward.
There are lots of days I'd like to administer tests before allowing someone to run for office, and somewhat simpler tests before being allowed to vote. Identifying logical fallacies would be about the top of the list for me, though I wouldn't insist on knowing the latin names. Basic economic concepts and statistics would be right up there as well. As for voters, I oscillate between making it tough to weed out the riff-raff, which could be construed as a form of literacy tests to prevent immigrants and other minorities from voting, and being so simple that anyone ought to be able to pass, such as "The elephant, a federal or provincial responsibility?" (Trick question! None of the above, mostly. Elephants in Canada live in zoos, which are a civic responsibility.)
The only thing that consoles me about the news lately is the thought that half of the smartest people that have ever lived are alive now, and have ways to communicate and collaborate that weren't even dreamed of a generation ago. It's depressing to think that the same is true about the stupidest people, and there seems to be far more of them. Twain's quote comes to mind. "Never argue with an idiot, they'll drag you down to their level and beat you with experience."
Movies are full of villains in their lair plotting world domination, or a shadowy but secretive cabal of people who are actually running things. (Don't get me started on conspiracy theories!) Consider that if they were actually good at it, they wouldn't need to be secretive. Demonstrating competence at running a national state would be so rare that it would shine out like a beacon, and they'd be elected in perpetuity.
I'd love to see the media giants broken up again. Investigative journalism ought to be a respected and highly paid profession. People spending public money ought to be routinely examined for conflicts of interest. Screw balance, I want the facts! Let one journalist (try to) document how Kenney is a great premier, and another chase how his government lost track of $4 Billion in COVID related spending. Peculation is not alleged, at least not yet, but given that bunch of morally corrupt people and that much money I'm not going to be surprised if such allegations are made.
Some more peonies to soothe you.
2. 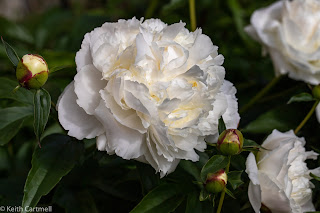 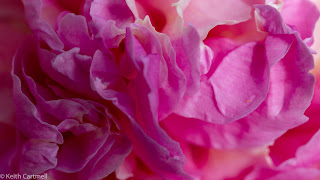 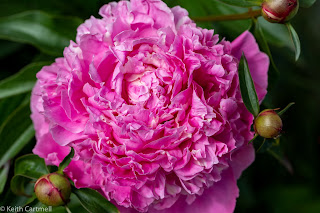 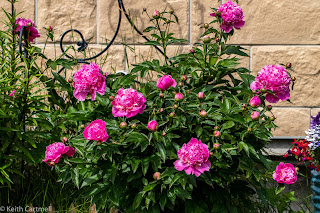 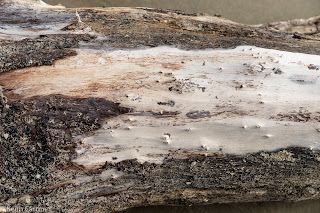 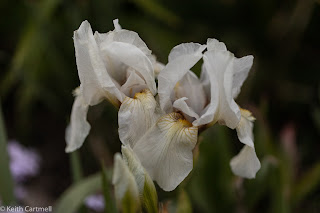 And in a flowery serendipity, courtesy of Green Fools, preparing for the Bouffon exercise. 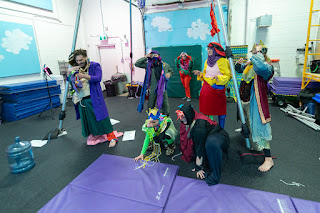 Film (6x9 Ektar 100) and a landscape on the way to the Leseuer ridge walk. 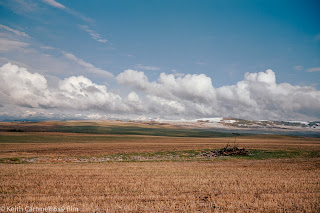