I don't like to change the titles of my blog. I'm a make up your mind and get on with it kind of guy. So when I started today, I hadn't decided if I was going to do a spin session, or go for a run, or knew if our Premier was going to call an election or not.

After my run, I find out we now have a criminal Premier. That's what we call people that break the law, right? There is a law on the books, passed by this very government, saying the election would be next year. He didn't even go to the trouble of rescinding it, which he could have done quite easily with the massive majority he currently holds, and then call a legal, if unnecessary election. But no. This is a guy that wants what he wants, when he wants it. Sure, he'll say this and that gives him a loop hole. Yeah, yeah, yeah, that's what they all say. Talk to the hand. We're done here.

Even though he says we are in a fiscal hole to the tune of billions, he's quite happy to splash around taxpayer money on advertising and (re-re-re-)announcements. Then after the election, just you watch, the taps will be shut off, and the screws put even worse to the ordinary Albertans. I will take bets that the Calgary Cancer Center gets cancelled again. Or "put off" or "delayed", or whatever euphemism takes the place of "we aren't going to build it." They've done it twice before, maybe third time is the charm, but I doubt it.

There is only one solution for this nonsense. Vote for someone else. The PC's might be the party of your parents, or your grand-parents, but it's time for a change. At this point I don't really care who else you vote for. Last time, the Redford PC's rooked in a lot of people that were nervous about the Wildrose forming a lake of fire government. We saw how that turned out. Don't get fooled again. If everybody votes for someone else, the vote splitting doesn't matter. But look around, see who's strong in your riding, that isn't a PC, and vote for them.

So, on to the important stuff. Did I do a spin, or a run today? I should make you wait for it.

Anticipation... (sung to the tune of that old ketchup commercial.)

Fooled you! I did both. Dusted off my bike, checked the tires and trainer, and settled in for 30 minutes of easy spin. Very easy by my old standards, but that's ok. No knee or hip crankiness.

While on the bike Celina the little sweat pervert showed up to indulge.

Then, off the bike, quick change, and outside for a run. So nice out! I didn't have an plan for the run since it was the first brick in ages. Ran easy and stopped when my legs were getting heavy. 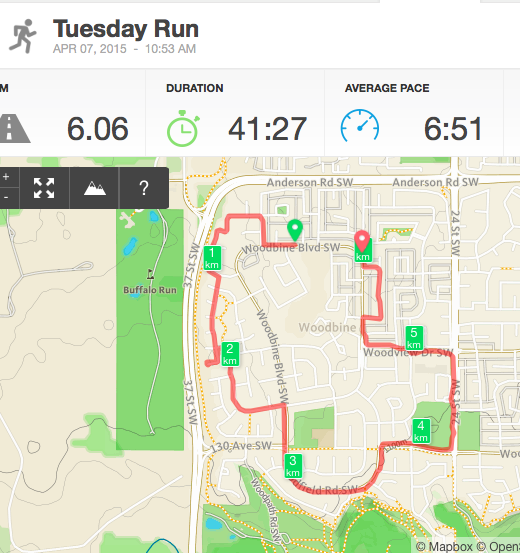