Here I am, sitting outside, writing. No parka and stuff. Not shorts either, I admit, but it's high teens, sitting in the back of the house in the shade. Lovely.

Where to start with unexpectedly?

Writing. Some of you may remember last year I did NaNoWriMo, and succeeded in writing a "novel" in the month. Technically, it doesn't have to be a novel with a beginning, middle, and end, complete with real live characters, stunning exposition, and an arresting plot. It could be a shopping list, as long as it's 50,000 words. I validated "The Sweet Elixir" with 60some thousand words, and when I checked the other day it had grown to just over 110,000 words. There should be a sequel to it, but I'm not there yet.

I have been musing about what to do for this year's contest, and unexpectedly, ideas have been coming to me. There is one scene I have in my head, where Dwen has an unexpected conversation on the stairs at the very south end of new aeration. And another of her in a dire situation. So far so good.

The first book I ever wrote is called The Bone in the Digester. I stalled on it for many years because it couldn't decide if it was a love story, a mystery, a thriller, or what. In the end, well, the road to the ending took a hard right turn into sort of science fiction, and I had a great deal of fun with it. There is a solution to the mystery, and so far so good. Two solutions actually, and a twin's thing that I'm not sure is a digression, or a major plot point. Plus lots of other good stuff I liked in the detour, and so far so good there too.

But now that I've written that out, it's begging for it's own sequel, the one that ties that story to Elixir. I've begun to map it out, and the ideas are coming thick and fast. Good thing I've got Evernote on my phone.

The interesting thing for this one is to start telling the story for people that have not read Bone, and that's all of you. I need to introduce some characters, though if you've read Elixir you've met some of them already. This is part of the challenge of writing a sequel, to not bore the people who've read the one before it, and not leave new readers completely out to sea. One of the characters changes quite a lot between Bone and Elixir, so that will probably get worked in too. (Pauses to make a note.)

So I think what I'm going to do is back up a bit, to that right turn, and have another run at it. Maybe this is cheating for Nano, but it's not a rewrite, or a copy paste dump. Now that I know what that says, I want to try taking it in a slightly different direction and tell a different story, aiming to get to a particular result. This ought to be interesting.

So there may not be quite as many blog posts in November. But wait! Another unexpected thing. Last November had 19 posts, and that was not the fewest that year. Which is a bit of a surprise to me. I sort of don't remember doing so many blog posts. Some of them had snippets. Is this something you want to see, or don't want to see? Leave a comment and say so.

But this year 19 per month has been my average, and if this continues the rest of the year my output will be the lowest since I started my blog. Not that I'm trying to go for raw production, oh no! I aim to produce a high quality blog for my readers. Just don't panic if the posts are a bit more spaced out next month.

Remember, I have this big orange literary cat that wants to be involved in the writing. Very involved. Linda says he resents the laptop, and views it as a rival object, but I think it's just that he wants to help. I'm pretty sure that with his razor sharp kitty senses, he thinks he can flop on the keyboard in such a way as to press the various keys sequentially to produce the great cat novel of the century.

Then there was yet another unexpected thing today. It was not just nice out, it was nice enough for even a bike weenie like me to go for a bike ride. So nice I work shorts and a bike shirt, just like during summer. Sunscreen even!

While my legs have been feeling better, I'm acutely aware that they haven't been feeling the bike love the last while. My thinking was today to head out and see what they thought. I figured Road to Nepal might be overdoing it, so I was out 22X to city limits. Then as I was turning around, in a completely unplanned way I met up with my neighbour and one of his buddies. We chatted right back to the house, me playing with the bike draft for most of it, but I did a bit of pulling too.

It turned out to be an hour, and 25 K overall, almost exactly. I'm very pleased with that, and unexpectedly, my legs are pretty happy with it too. I can feel my right quad a bit, and my knee wasn't as fluid as I'd have liked, but this is all good. Normally by now the bike is on the trainer big time.

There was an unexpected thing at work too, in that the manager of our group resigned. I was really looking forward to be working with him. Sigh. And an unexpected SQL thing that would be much too boring to explain, if you don't already know SQL.

I've been having fun with the new iPhone. The camera is fantastic! I'm seriously thinking about getting one of the actual camera apps that gives more control over the settings. Do any of you have any recommendations there? I've even taken some video of Curtis, and some slow-mo. I can remember when slow-mo replays were an amazing thing on TV. (What's that you say? That I'm old enough to remember TV itself being amazing? Hush you.) So getting them on a phone is pretty amazing to me.

Some photos as a reward for making it through all the unexpectedness.

Who wants to meet up for this? Was thinking of doing breakfast, heading over to Glenbow, and then maybe doing lunch after. Probably not during November (because we're all writing, remember.) 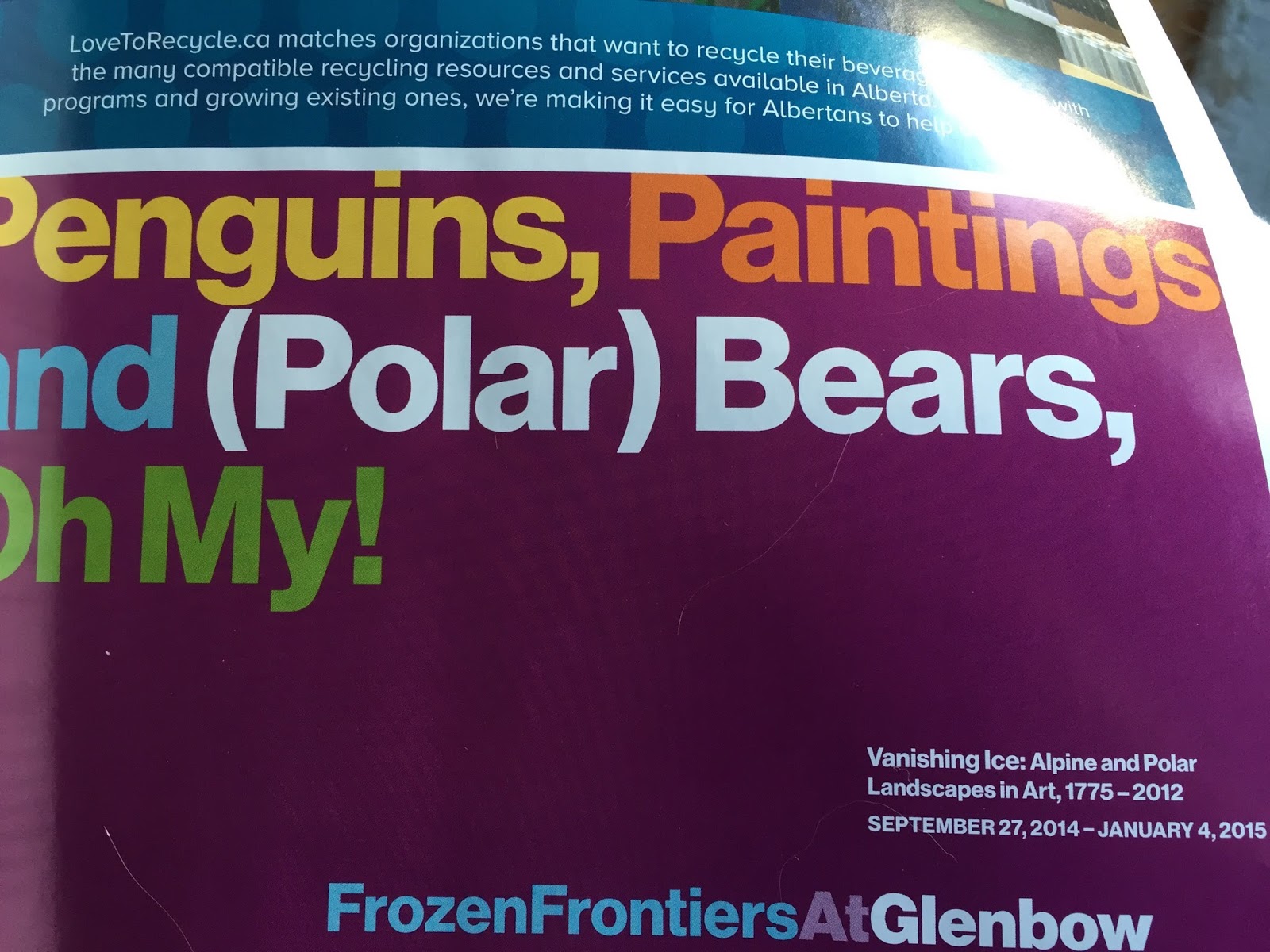 Here she is, the hard snoozer in the sun. 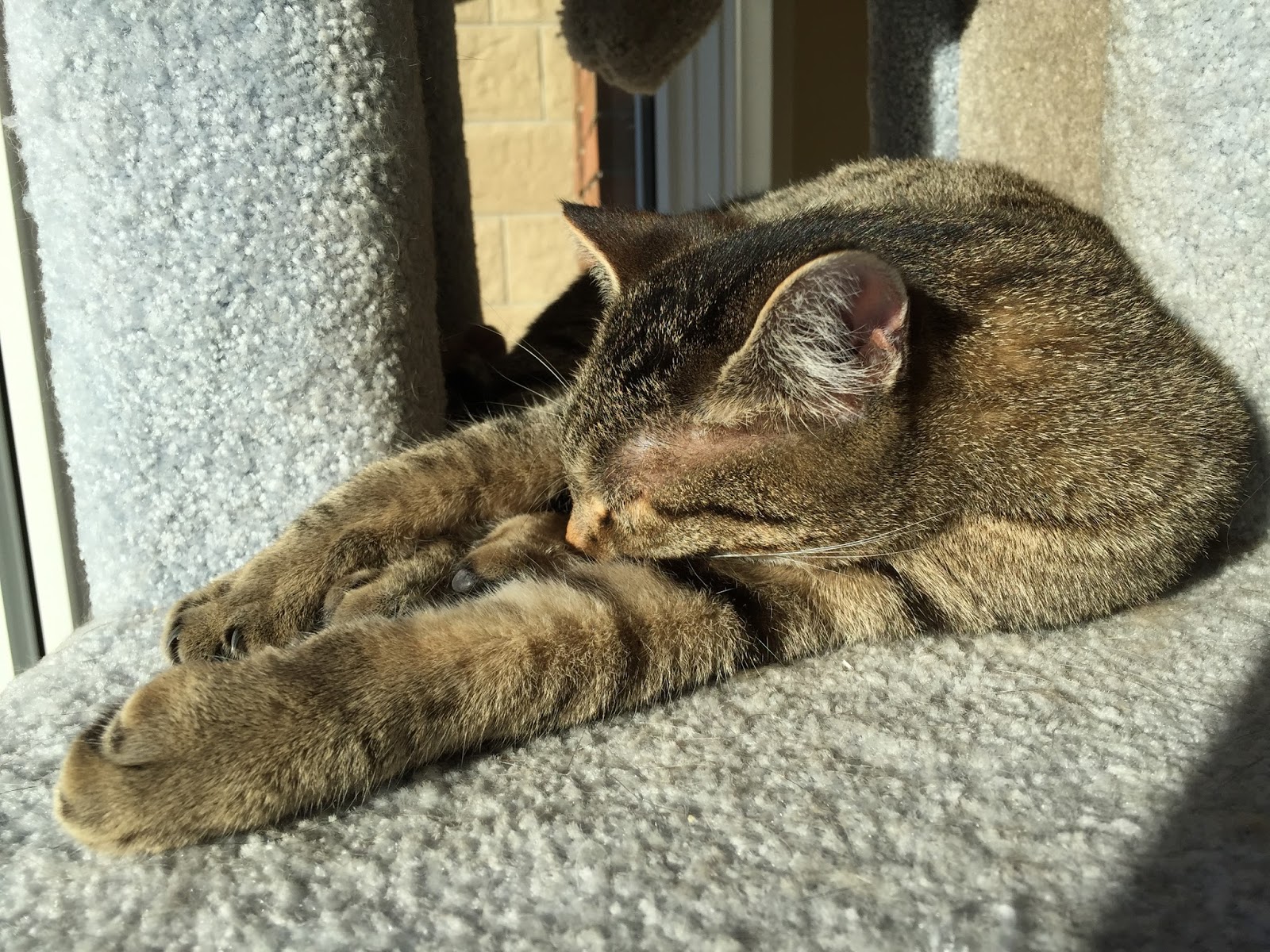 Curtis, the gatekeeper of the kitchen. 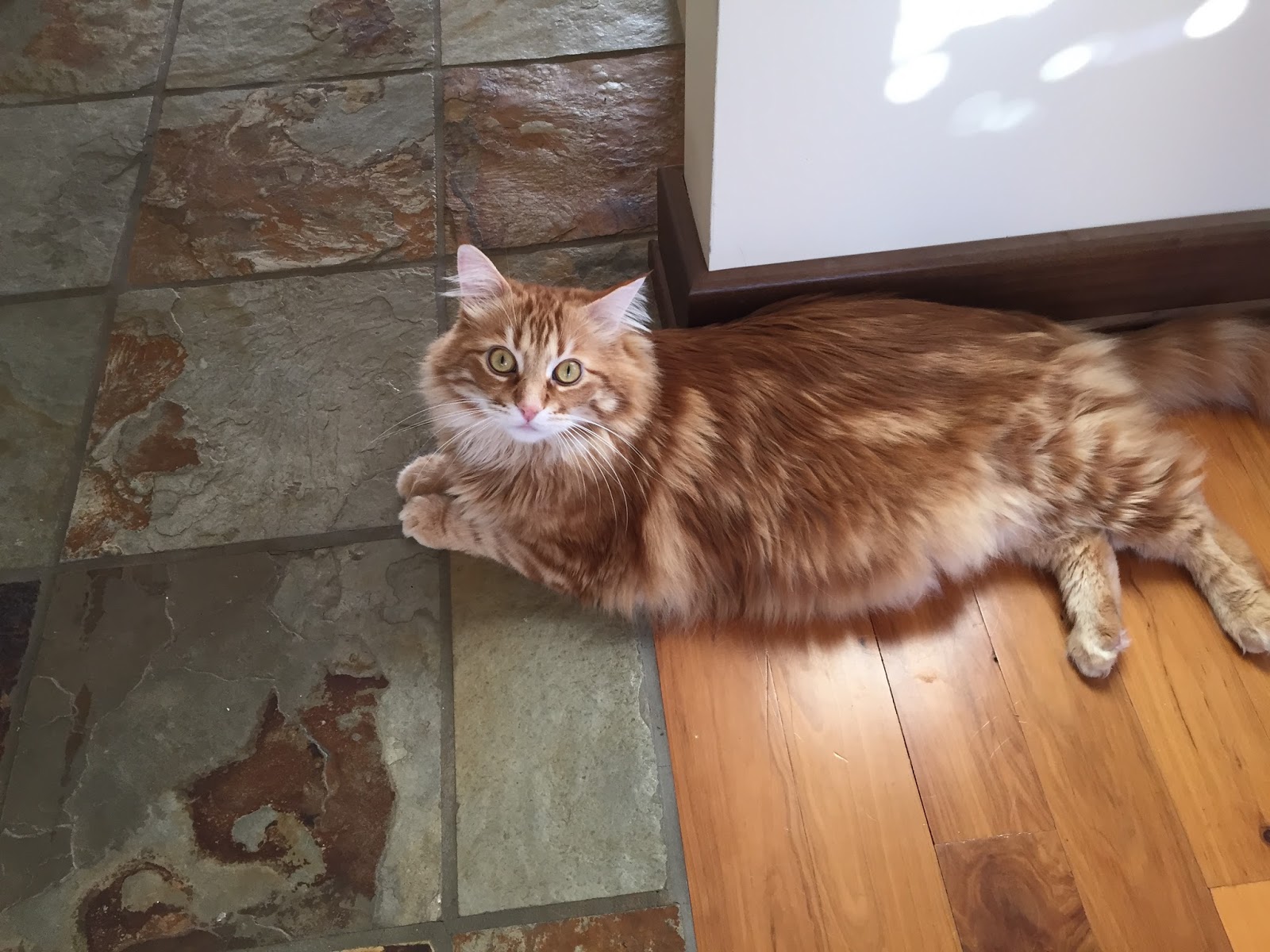 I totally love this pose, how he hooks his paws over the front, and looks over his kingdom. 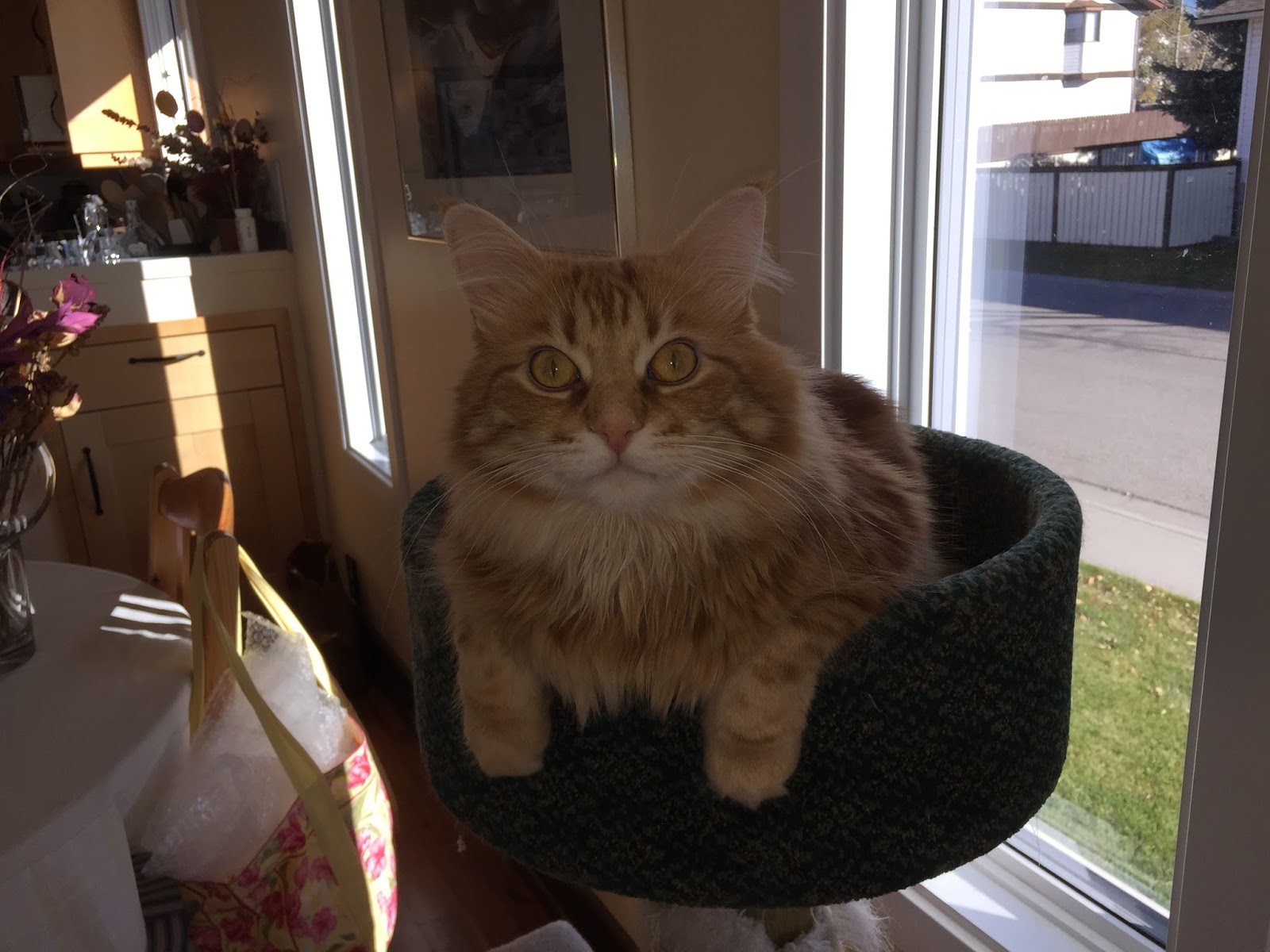 So for comments, please and thank you. November snippets in or out? And any iPhone camera app recommendations?