So you know how some people post nothing but rainbows and unicorn poop? Here's some honesty tonight. I'm a bit cranky. Just a bit.

Let's start with a small rainbow. Monday's swim was really good. About 1.25 K or so, not sure exactly. A few intervals, and a bit of water running. Even though the water was cold, it was all good.

I am normally a knows where he's going kind of guy, and normally like to walk a straight line at a brisk pace to get there. Just lately it seems like people are getting in my way. They come out of nowhere, or stand around taking up the entire frigging sidewalk in front of the Palliser like half-slaughtered sheep. Then I have to maneuver around them, trying to restrain the urge to just trample over them. That isn't well thought of.

Normally I like the +15 system, but perhaps using it after a 12 hour fast isn't the best idea in the world. Yes, lab tests time. So there I was having to put in a couple hours of work on a complicated query, not just before coffee, but before breakfast. So to say I was eager to get into the lab to do the bleed and pees thing is a bit of an understatement. You'd think some of the people around me were deliberately trying to be obstacles, and not just to me either.

But I was channeling the time in Torino, going into the train station. I was tired, cranky, and wanted to be on the train. There was a longish walk to the doors, and a flood of people coming out. I was wearing a bright yellow coat (If sir will wear a coat of that colour out in public, he will find nothing of interest to him in this store.) and decided I simply wasn't in the mood. I locked eyes on the door, and walked an absolutely straight line toward the door. I was looking over people, paying them no attention at all, projecting the complete willingness to walk through them. The crowds parted around me. Linda was hanging onto the back of my jacket trying to keep up.

Then there was the guy this evening, tailgating me under 9th ave on 4th St SE. Turning right onto 11th Ave he goes wide trying to get around on the left, but I'd already signaled and was sliding over. He tried for the right, but someone was coming out of a parking spot. Just past the construction, as I had my signal on to go left, he cut through the end of the construction zone, and zoomed past me in the far left lane. I'm in the next to left, with two more over to my right. Then he zooms across in front of me to get over in the second to the right lane. We exchanged glares at the light. Then I nearly peed myself laughing as another idiot blocks the intersection on him.

Tonight, paying bills. Now, keep in mind I remember when you had to pay bills by mailing a piece of paper to each company, or visit their office in person, and wait in line. This was before paying bills at the bank. Now I can sit at a desk for a few minutes and shuffle money around. It's wonderful.

Except when you lose an envelop in the clutter on the desk. Oops. At least it was only the phone bill for the number we give to people we don't want to talk to. Then it was one of those times when everything seems to struggle. Unable to separate pieces of paper. Opening an envelop, using a tool designed for the purpose, that I've used only a zillion times in the past, was suddenly a difficult task. I checked all the math twice.

I signed up for some of my bills on e-post, and I'm seriously considering going back to paper. I have to remember to look at the bill, since only the mobile phone bill comes as an email, and even then I have to go looking for it. This time Direct Energy sent some bafflegab about account changes, but the bill finally arrived so I could pay it. No changes. Just late.

Tonight was to be a run night, but after a little bit of dithering I decided not not. My hip, quads, and hams are feeling just a bit tight, as if just the right stretch would click them and all would be good. I was feeling rushed and cranky, and decided that rest is better for me than the run. If my bike had been set up on the trainer, I might have done a short ride, but no. Getting that done isn't hard, but it isn't a task to be done when feeling cranky and tired. Even with the heat gun trainer tire trick.

And while it isn't quite singing you out with a rainbow, here's another nice sunset. This is actually looking south. 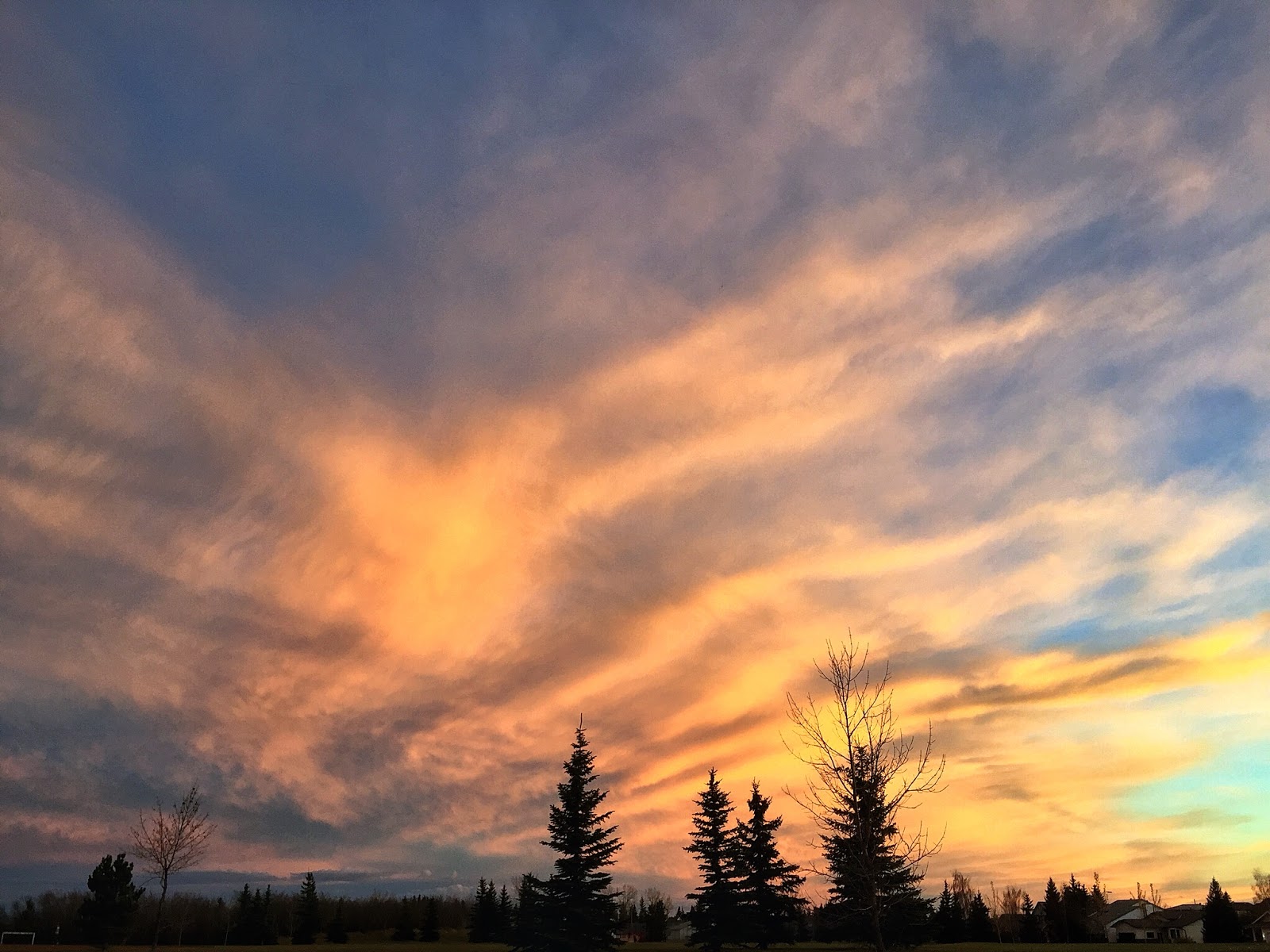