Hydrating on coffee and wine

Book club was at our house today. The book was the first one in the Game of Thrones series, but you have to understand our book club isn't a typical one. I've been friends with BJF and LK for about 20 years now since we worked together at the Nova bunker. LK worked in the next cubicle. Then the four of us got together in a hospital room one evening and had more fun that I had ever imagined possible, and we've been friends since. We get together about once a month and chat about stuff in general, but we always talk at least a little bit about the book. That's why it's nominally called a book club. There are other members, MK is another refuge from Nova who shows up every now and then, and GS when life isn't happening, and some of BJF's friends every now and then. It's fun and we pick good books.

Linda had made a ton of yummy stuff, and we really had a good time. I drank a bunch of coffee, and since BJF wasn't driving she and I got into the wine just a little tiny bit. Yes, just a bit, though now that my day is almost done, I'll pour a little more. We don't want it to go bad, right?

Before they came it had snowed all night so I was out shoveling after I slept in. That's 45 minutes I would have counted as core and cardio, if I was still keeping track of that, but I'm not. Mostly it was light fluffy stuff, about 12 cm worth, but the bottom of the driveway was wet and heavy.

Once on the bike I settled into easy spin, trying to stay in the 90 - 100 rpm range, easy gear. This was just to spin out my legs, think about going in circles, and work on a stable core. Did some speed work and a bit of standing work, but not in a really hard gear. I kept it fully aerobic and managed to watch some DVD's. I got through the last of the Sarah Conner Chronicles, more's the pity it was cancelled. Summer and Lena are so much fun to watch. I'm also back into Sanctuary. Love watching Amanda, though it's weird to see her with dark hair and hear a different accent.

Some core afterward. Plus, here's another T shirt photo. Linda says I look scary, but it's because I was just awake and hadn't had any coffee yet. Most of you know the story behind this shirt. If not, look around my blog, I'm sure you'll get the idea. 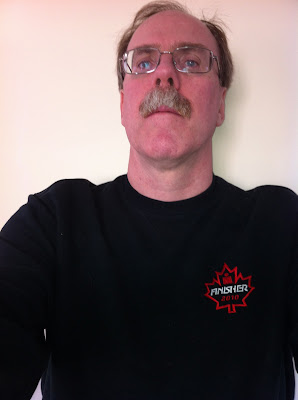 The colourful photo yesterday was indeed of the furnace and hot water tanks. Here it is with some annotation. It was taken with my iPad in the Photo Booth thermal image setting. However, it's not a true thermal image. The hot copper pipes are, well, hot, and the cold ones are (duh) cold, yet they show as essentially the same colour. What it's actually doing is showing the amount of light bouncing off the surface. A lightbulb itself is a bright red. The big green blob is the air ducts above the furnace, and the yellow line heading off to the left is the furnace exhaust. 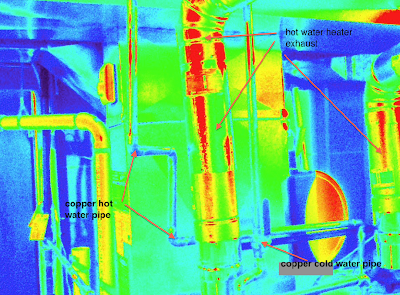