I did the Butterfly!!

Surprise! I had to use fins.
That was during yesterday's swim, and I forgot to mention it. Can't imagine why. Maybe senility is setting in.
Surprise! You were expecting a year end wrap up.

What I really meant was for this to be a 2010 year end post.
Surprise! I'm not going to talk much about Ironman Canada.
Liar. Maybe. Let's see how this turns out.

I've known all along I didn't want to work full time till I'm old, then do geezery retirement stuff till I die. That's no fun. Part of the plan was to transition to working less than full time, and having more time for things I want to do. Some of you have heard me mention my buddy Alan who "aspires to schedule his work life the way most people schedule their vacations."

In the grand scheme of things it's gone pretty well, for the first year at it. I'd have liked to work a little more during the rest of the year, and a little less during the training peak for IMC, but I'm not at the stage where these things are under my control. In any case my two employers during the summer were everything I could ask for in terms of flexible working hours. Which, given the crappy weather that often moved in during the late afternoon allowed me to get in more rides.

I've no real idea how the work thing is going to go for 2011, but there were a number of inquiries early December, then I think everyone went into year end mode and put off whatever could be put off. Some of them are projects I'd really like to be involved with. If any of you happen to know of someone needing a business analyst please get in touch with me.

Keith's Odyssey to Planet Fitness reached a major milestone with the completion of of IMC in August. However, I gave the blog the title I did because fitness is no longer just a destination for me. One can't "do" fitness, check it off the list, and then forget about it like the naked tandem skydiving with the hottie instructor. Over the last three years my activity levels have gone up to levels I flat out wouldn't have believed 5 years ago. What's more, I want to keep those levels up by continuing to be active. Well, not active at training for IMC levels. That was a bit much.

But I do want to be active doing things I enjoy. I'm still hoping to get out and try snowshoeing this winter. I've been meaning to try for years. I'd also like to rent some cross country skis and see if I can still do that. On good days I'd like to take snowboarding lessons, but I'm under no illusions about that. My ballroom dance instructor took snowboarding lessons in her mid 40's and her teen aged daughter went along to laugh at her mom falling on her ass. It didn't happen. Not once. But then with her dance background one could have expected her to be balanced and coordinated. I'd expect to fall a lot.

About now lots of people set their race goals for the coming year. I haven't done that yet. Firstly I'm enjoying the unstructured activity too much. Second, I have trouble committing to a goal when I'm not healthy. My right knee is a bit wonky these days, though the ART/Chiro and Prolotherapy, to say nothing of regular leg exercises, have been doing good things. I'd like to get some solid bike workouts under my belt before making the assumption it's ready for regular, structured training building towards a goal race.

Speaking about training, I have not the slightest idea in the world how many K I ran or biked this year, or how many hours I swam. Nor have I any interest in doing any of the activities it would take to find an approximate answer. I'm kind of amazed that some bloggers can give their distances to the nearest 10th of a mile or K.

There are some thoughts about race goals, but that's all they are, thoughts. If I'm not ready in 2011 the race will still be there in 2012, or other races will be. I have to live with this knee the rest of what I hope will be a long and active life, so I don't want to bugger it up by trying to push it more than it's ready for. What are those goals, you ask? They revolve around half IM's where I think I have something to prove. It's funny, I'm quite reasonably convinced I could do IMC again, quite a bit faster, but I'm under no compulsion to actually go do it. On the other hand, there are several halfs I need to revisit. Grrrr.

Which reminds me, once upon a time I promised to take a photo of all the medals so far, because one of my readers wanted to enter a race that gave out finisher medallions. So here they are. It's surprisingly difficult to take a photo of shiny objects. What's more these are even in order, top to bottom, left to right, just like reading print. 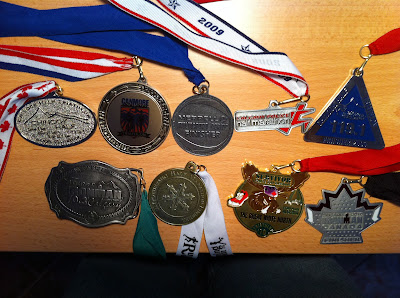 Just for fun, since I'm posting photos, find the cat in this photo. 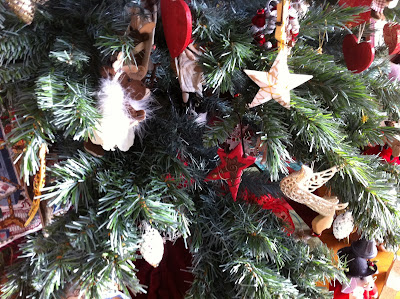 The really huge decision for me was to join Facebook. For a long time I thought about the privacy violations, and how much I enjoyed, in a curmudgeonly sort of way, being a technological Luddite. But then I noticed I was losing touch with blog buddies. Their posts became more infrequent. Fewer people were commenting. A couple of them hinted all the action was on Facebook, and they no longer had the time to blog. Too many words, or too slow a typing speed, or something. Later, when I got onto Facebook, all my suspicions were confirmed. Here is the proof. Unlike SOME people I understand that a link to a Facebook page might not be visible to all my readers, so I took a screen shot. 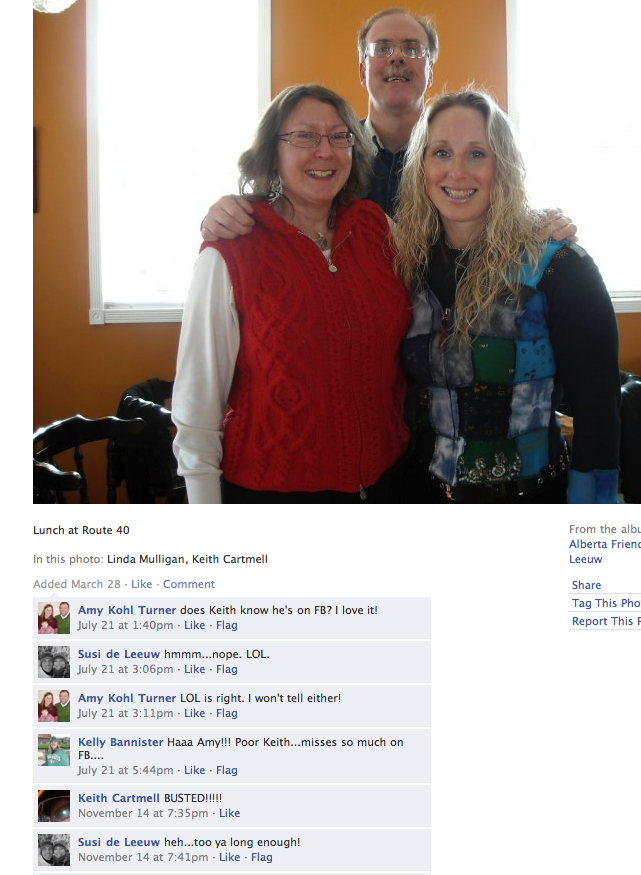 Which leads me to the saddest event of 2010, finding out that Route 40 in Turner Valley had closed their doors. It was quite simply one of the best places to eat within driving distance of home. It took about a half hour to drive there, but the mountain scenery was usually spectacular any time of day or year, and the food was awesome!

One of the things I get a kick out of reading blogs is the bleats of people much younger than me as they get older. I have a niece who was seriously spooked about turning 30. That seems impossibly young to me now, even though in my head I still think of myself somewhere in my early 30's. There are some things I wish I had done differently back then, but there's no crying about it. Those decisions helped make me the me that I am today.

Here I am 2011, happy, reasonably healthy, and good to go for another year. See you there!