And now for something somewhat different

Last you heard I was having external hard drive problems. As always there's good and bad news. The good news is the drives are fine, it was an enclosure power supply failure. The theory is, get another enclosure, set it up the same way, plug in the drives, and all will be the way it was.
The bad news is that the people I bought the enclosure from have split off their Canadian web presence. On the American site I can see the product I want, but it won't let me put in a Canadian address. The Canadian site doesn't have that product. A call to customer service didn't help; they can't manually override that. The best the agent could suggest was getting it delivered to a friend in the USA who would ship it to me. Or, she said, "Washington is really close to Canada, we could ship it to a post office near the border and you could zip across to to get it."
I was stunned. She had not appeared to have heard of the COVID travel restrictions, and although Washington is indeed close to Canada, it's not the part of Canada I live in. It's a 7 hour drive to the nearest town in Washington. Not gonna do that. I tried a local store I've had good experiences with in the past, and their supplier can't help. So I hit the supplier of all things weird and wonderful, Amazon. It arrives next week. You can bet I'll also be ordering a big SSD and doing some data copying as soon as I get the drive going.
So the hard drive adventures are in a holding pattern for a moment. But all is not lost in the photo department. There is a 32 GB USB drive that has every edited photo up to about July 7. I also have a 2 TB external drive that I'd taken with me on recent trips. Technically speaking, it's not a backup. It's just a drive that happens to have many photos on it, that happens to be on my desk.
So what do I have on that drive, I asked myself? I think all the 2017 edited photos. Folders called NZ2020, Yukon2019, New Zealand Raw. Between them they contain all the RAW files for all the photos for those trips, and the edited photos from them. So that photo talk session about New Zealand I've been asked to do? I could do that today if I needed to, though I really need to go copy the desired photos into a separate folder.
In the mean time, I'm thinking of what photos to put here. I'm enjoying scrolling through them. While I have various copies of various photos more or less to hand, what I don't have is the current version of the tagging system that tells me what I've blogged. So you may get repeats. So sue me.
New Zealand 2019 trip, on the way to Craters of the Moon. 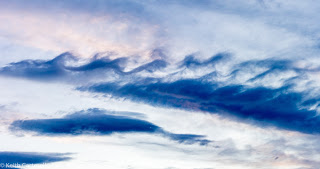 This is shot from a boat on Doubtful Sound in 2019, and I totally love it. I've always been meaning to revisit it. I want to drop it into photoshop and fix the places where the photos didn't merge quite exactly right. I've described what needed to happen to buddies that know photoshop, and they said, 'oh, that's easy'. Yeah, if you know how to do it. I don't, and haven't felt up to the task of trying. Every time I look at doing something in photoshop, the instructions seem to make some knowledge assumptions that I don't share, and it makes the instructions impossible. Maybe after I retire again.

And that's enough for now. No Of the Day feature till the raid drive is back in operation.