We finally did it

We usually go out for dinner to celebrate birthdays and our anniversary. Linda was having a minor issue with her teeth on the run up to the recent event, so we postponed it. Then it got really cold and we didn't want to go out unless we had to. It's warmed up recently, and we finally got out to Alloy, and had a wonderful meal. We did one of those deals where there is a set menu, and once you decide they keep bringing food out.

It isn't quite as good as the best example of that we've ever had, but it was still pretty darned good. Neither did I drink 6 glasses of wine. Which actually is one of the reasons we don't eat out much anymore. Linda looked up one of the wines on their list. It turns out to be nearly 4 times as expensive as going to our local Co-op liquor store. I don't mind some markup, since there has to be some, but that bites. Even the price per glass gets me 3 or 4 bottles of my wine. It was quite nice wine, but assuming 5 glasses per bottle, was that glass 20 times better than my wine? No. Just no. Plus at home I can drink as much as I want, and don't have to worry about driving home.

Don't think we didn't enjoy ourselves. We did. It was a major milestone meal, which also explains the two expensive trips, as anniversary presents to ourselves. The next big one is 50 years, and we figure we're in good shape for it, all going well. We were beginning to scope out the travelling between now and then.

We had a recent example of things not going well. My favourite cousin had her house burn down. Everybody got out ok, and they have insurance. At this point that's about all I know. She has family nearby so I'm pretty sure that she is being taken care of. One day we've got a house and stuff, the next could be a pile of ashes. It happened to us when I was in grade 5, old enough to realize that everything I had fit into a suitcase.

The cold snap put a damper on my photography. I don't mind getting out when it's cold, but that was just stupid. Plus the cats have been showing off lately. The photo scavenger hunt has been going well, and I'll post those separately.

Here's how cold it was. This is a bit of our kitchen window. 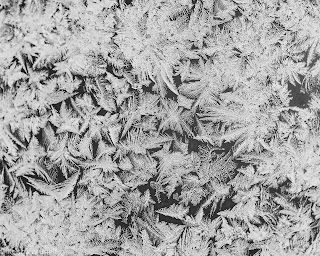 Here's an example of adorable cats. 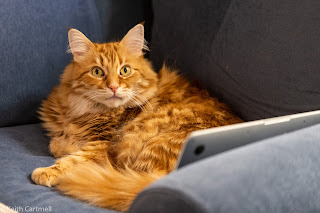 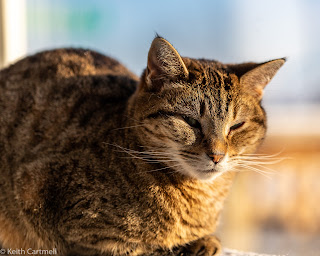 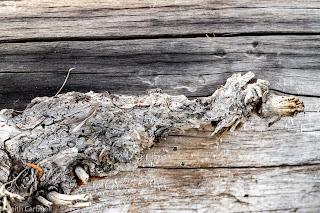