Julie broke me out of my shell today. We were chatting on Facebook about swim stuff, and she suggested I meet her down in Pincher Creek and SHOW her some of the stuff I was talking about. It's only a 2 hour drive, and the weather is nice, so I didn't have to think about it too much.

The drive down was one of those clear and sharp Alberta days. I needed sunglasses. There is some weather coming in over the mountains, but it's still so clear. I took this shot on highway 3, just before 785 south. Obviously I'm facing west. 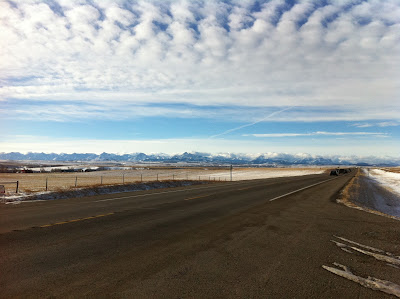 The pool is quite nice! Surprisingly nice. If it was closer I'd swim there more often. We did a bit of warmup, then started trying different stuff. We actually had a blast! Lots of one arm drill for me. Lots and lots. More than I've ever done. Julie would try something while I watched. I was trying to yell when she was doing it right, but that doesn't work so well, what with stroking along one armed to keep up, trying to watch what is going in, and working in the occasional breath. We did a bunch of different drill. At one point I was holding on to her good foot, while she was powering away with her arms, then I made her tow me the whole pool length.

We were in the water 1.5 hrs, and swimming most of it, but Julie was doing all the work, trying new things to fix habits she's trying to break. She has improved, even though she doesn't think so. I've no idea how far we went.

I even used the iPhone to take some video of her swim. She has the Youtube link so if you want to see it, you'll have to go to her blog. She said she didn't mind, but really, it's hers and should at least get first dibs for her blog. It's not the smoothest video since I had to dodge a bunch of crap on the pool deck. Last thing I wanted to do was fall into the pool while holding the iPhone.

Afterward we went out for coffee and snacks, and of course we chatted up a storm. Lots of people would be down about breaking a bone in their foot and DNS a big race, but she is so good about seeing the bright side. I love all that positive energy that just washes off her.

The drive back went by in the blink of an eye. I had good tunes on, singing along. The sky and landscape were going all pastel in an peculiarly Alberta way as the sun set. It's so nice to get up above 120 Kph (75mph) for a couple of hours with your brain turned off. There's two small towns where you have to slow down, but that's it. It's been a while since I've driven that far by myself. I've had lots of long drives on business (Hello Consort and Richmound), but the big daddy of trips was when I moved out west in July 1980. Everything I owned was stuffed into a 75 Pontiac Lemans for the drive from Toronto to Calgary. I loved it. The weather was beautiful, and it was nice to have time to think and look at the world. It was the first time I'd done the drive. Northern Ontario is massively brain numbingly boring and it goes on forever. It's nearly two whole days. There's one section between Hearst and Longlac where there is nothing but muskeg to look at and the road is essentially surveyor straight for a little over 200 Km. But quite a while later you escape and you get out onto the prairies and it's wonderful. I loved it. There is something liberating about the huge blue sky and the horizon that is forever away.

Today reminded me of that, and I spent a bit of time thinking about what's happened since that drive 30 years ago. 30 years!! Some of my readers hadn't even been born then. Somewhere along the line Calgary became home. Back then it was a small city of 640,000 and it's grown to well over a million. Some days I lose track of all the changes. But it goes along with the changes in my life. In 1980 I was just a confused kid with big dreams. I still don't know what I want to be when (if) I grow up, but I've come to accept that about me, and I'm more committed to enjoying the journey.

I've never been fussed about "a career" like some people are. A job is just a tool to earn money. It's something you do. It's not, or shouldn't be what you are. There are a million ways to earn a living, but only one way to earn a life, and it's between your ears. I've had a ton of jobs here - industrial truck tire repairman, power engineer, plant operator, maintenance man, data entry clerk, technical database support, software tester, data integrity analyst, technical writer, software admin, and these days I'm mostly a business analyst of various stripes.

My hobbies and leisure activities have changed too. For a while I was active in science fiction fandom, then sort of morphed into the Society for Creative Anachronism. There's actually an interesting story about that. I was living in apartment 807 at the time. At the second SF club meeting that I showed up to I was given a print out of the club's members along with their addresses and phone numbers. This was a computer print out, which was a big deal in 1980. The first thing I noticed was that they had my address wrong, since the apartment was given as 708. An easy mistake. Whoops, the name is wrong too. Found the guy and started chatting with him. We started carpooling. Then one day he's hauling this duffel bag and a bunch of odds and ends to the car and I'm helping him carry it. Armour. Real metal and leather armour. He explained it was something a bunch of the science fiction people were involved in. He had me with "we dress in leather and beat our friends with sticks."

I started doing that, and got pretty good. Later I injured my back and couldn't do that anymore, but jumped tracks into administration. Being organized and literate, a pair of qualities in short supply in the general membership, I was given more and more responsibility, and ended up at the very top of the admin pyramid. The big learning out of that was that I no longer wanted to become a professional politician, which had been something I'd considered as a career path.

For a bunch of years Linda and I took ballroom dance lessons. Waltz, cha-cha-cha, two step, ballroom tango, foxtrot, East coast swing, and rhumba. Later we added some west coast swing, and Argentine tango, both of which I love. I just can't do west coast swing very well, but love the music. Here's Etta James "I just want to make love to you". That's a fabulous West coast swing. Argentine tango is quite different than ballroom tango, and is electrifying to watch. Try this for technical brilliance, though it doesn't really capture the spirit. This one shows a bit more of the spirit of tango, though it's staged a bit. It takes a minute to get going, and makes more sense when you understand tango is best dance by a couple deeply in love that happen to be completely angry with one another at the moment.

Then there was triathlon, but you guys know the story from there. It's been a long, interesting trip, and there isn't much that I'd change.