That was a tough month on the photography front. I am getting darned sick and tired of winter. We had lots of snowy and generally cold and crappy weather so I wasn't out as much as I'd have liked. Still there are a few nice photos. The winner was fairly easy, but I'm having trouble picking out the runners up. There are 5 that I like, each for different reasons.

I'd looked at them this morning, but couldn't make up my mind. Then we were off to brunch with some friends at Blackfoot Inn. As I digested I considered more, and wrote a bit while thinking.  In the end I thought of which I'd most like to see printed.

For second runner up, a bridge of wine diamonds in the neck of a wine bottle. I'd never seen that before. I've no idea what I did to get the surrounding blues, and tracery of blue in the diamonds. I'd like to tell you I cleverly added a blue laser to the setup, but no. Once I was done the wine, the bottle went downstairs to meet the macro camera. 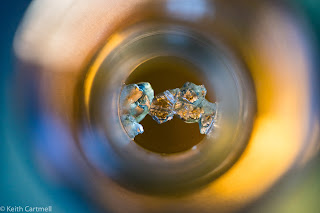 First runner up. Some might think this prosaic. A coffee mug. Meh. This is one of my favourite mugs, thrown by Connie Pike in High River. I was sitting inside about to take a sip when the morning light caught the mug just right and I started noticing some of the detail in the glaze. A few minutes later I was outside with the mug and camera. The shot actually took a bit of doing to get just right, so I was in and out several times looking at images on the computer rather than the camera. Afterward I took it downstairs to the macro camera setup for a closer look at the glaze. 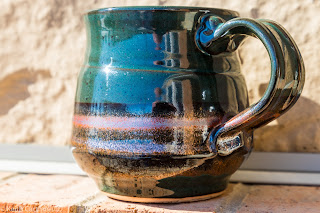 And our winner! I was out hunting for some specific dusk images for a writer buddy of mine. Along the way I crested a hill and saw this. You can bet I got the car stopped as soon as possible. Some of you might recognize those old combines in the bottom corner. 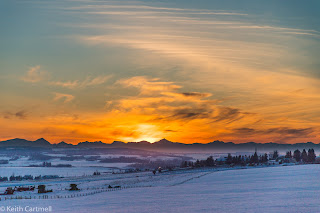