June image of the month

This selection was a struggle. I had a busy month and ended up with lots of photos I liked a lot, but no one that knocked it out of the park with a wow on first viewing.  Some are technically difficult, like catching a bee in flight, or an ant in motion, with a macro lens that has an extension tube between the lens and camera. Some are pretty. Some evoke a mood. Some have selfies in a water drop or an ant's butt. Some are about learning to catch the fine detail in flowers.

I like all of them, of course, and I've spent a good chunk of the day thinking about why I like them, and what criteria I use to pick the image of the month. There I days I regret that 'there can be only one' rule, but I think it makes for a better selection. It would be interesting if I'd make the same selection another time.

So here we go, runner up images first then the winner.

I've caught lots of bees doing their thing, anchored to a flower blossom. There's a few with the wing structure clearly visible, and it's beautiful. I've wanted to catch one in flight, and did it several times. Freezing the wings in flight isn't going to happen with my equipment, so don't look for that.

One very cooperative bee floated over the a white poppy, like a tiny spaceship hovering over a huge planet-scape. Another lined itself up with the radial markings on a poppy seed head like a spaceship coming in for a landing. (You can see that one on Facebook if you know where to look.) But this one I like the balance. The orange band is so cheerful, and it's the first time I've shot the clover in the front yard. 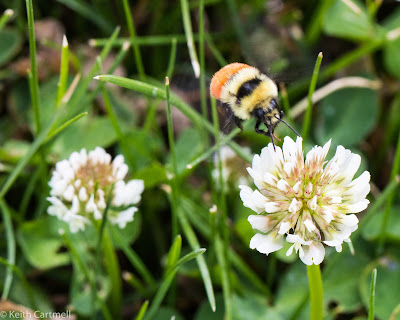 Ants love peonies. They make for a great subject when you're learning macro photography. Set up on a peony bulb, and wait. Sure enough, ants will come along. I hadn't known ants had hairy butts, but they do. The hairs are not as clear in this shot as in others, but this is the closest zoom in on an ant I've done. I spent lots of time looking at the different textures of the ant skin, if that's what it's called. If you notice, the top of the ant is in focus, but the peony bulb is ever so slightly out of focus because the depth of field is so narrow. I love roses and lilies. As soon as I clicked the shutter I knew this would be good. I've got others with nice water drops, but the folds, the light, the texture, the delicate spiral just do it for me. One thing that editing flower shots in Lightroom does is teach subtlty.  I'm seriously considering getting this one printed. 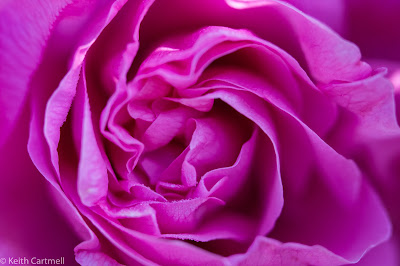 As you know, Linda retired earlier this month. There's another shot of her coming back from a walk, and spreading her arms like airplane wings. I put that one on Facebook and she got many nice comments. There's some technical photographic reasons it didn't make the cut, mainly the pavement background.

But a few days later we were out for a walk and I wanted to get a shot of her looking at the mountains. There are some technical issues with this one too, mainly tweaking the framing so the power pole isn't in the shot, but that's ok. It was a bit tricky to get her and the mountains in focus, and being at a bit of an angle had one elbow in focus, and the other out. Still, I like the mood of her hair blowing in the wind a bit, looking out over a beautiful landscape as if looking at her retirement, yet with the power poles to remind us there will be obstacles. 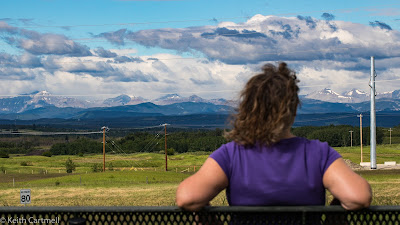