A massage is a nice way to start the weekend, even if she is earning her money working on run muscles and a sore shoulder. No whimpering or sniveling though.

Friday morning was clear, cloudless, and already warm when I got up. After coffee and something equally important I headed out for a run. 7 K 45:30 feeling pretty good, running whatever my legs felt like doing. It took a couple K to get into the groove. Lately I've noticed when my legs get tired my left foot starts sliding into the step. This was good all the way. Normally the first run after massage is a bit wonky, but this was good. I'm glad I got out when I did; it was getting hot as I finished up. Later it rained.

On the way down the hill into Fish Creek I saw a couple deer, and managed to get a shot of one of them, without breaking stride. Pretty good, I call that. 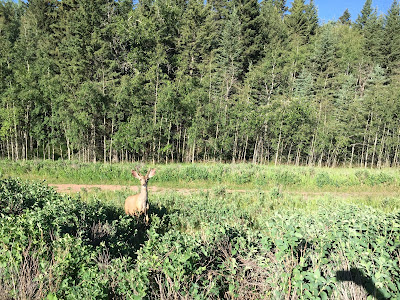 From there it was risking life and limb to get the cats into the carriers and take them to the vet. Celina struggled pretty hard about going into the carrier. Then I stalked Curtis. He had hidden in the basement. Celina was shrieking her lungs out like a fate worse than death was immanent. No doubt, she was saying "I'm caught! Run for it!" Curtis is such a good kitty, going into the carrier without a fuss, and strolling around the vet's office.

Curtis needs me to get more regular about brushing his teeth again, and Celina has some dental issues. 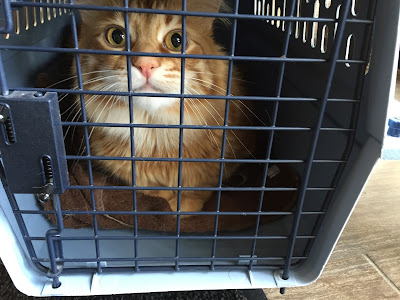 Later I was into the library to get some photography books. Interesting reading, but what was even more interesting was going straight from them, to watching Jesus Christ Superstar on Blue Ray, and enjoying the composition of the shots more than the movie itself. I'd seen it before, of course, but I saw it in the library and wanted to watch a couple particular scenes.

One of the books got set aside fairly quickly. Two strikes, but they were biggies for me. Long complicated explanations combined with the word "simply", ending with "when the exposure is right, simply click the shutter button". Grrr. Pushing the button is simple, I'll grant you that. Condescendingly so for the author to say it. It's judging when the exposure is right. There's nothing simply about it.

I hate that word in instructions. Whenever I review any text document at work, I search for that word first. I once sent back a user instruction manual with the comment, "There are 43 instances of 'simply' in this manual, and none are appropriate. Send it back to me when all are gone." That didn't go over so well, but I didn't care.

Today and Friday I've been working the camera a bit trying to achieve particular effects. The results are so-so. Some of the shots are pretty good, just not what I was aiming form. Lots of flowers, and for a while I was trying to capture the bees that were doing their thing. Here's a lucky shot.

Here's the lily that looked somewhat sinister in a photo a couple days ago. Much less sinister now, I think you'll agree. 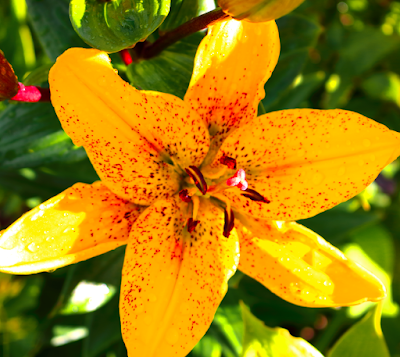 It's been fun working with the camera. The weather has been kind of crappy, so I've been doing some playing with the free software, just to get a sense of what can be done with the photos.

Three other flower shots, just for fun, all are the iphone. 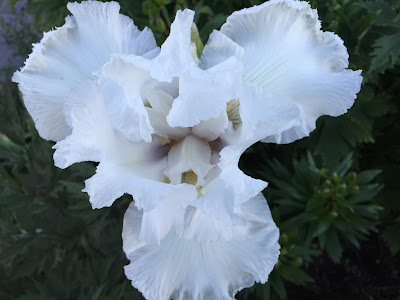 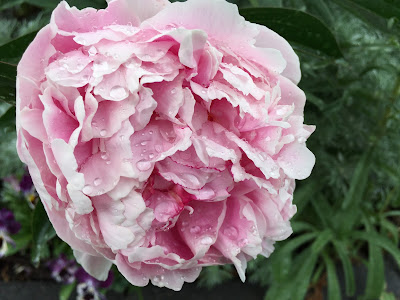 I was up early for a swim on Saturday, but it was bleah for me and my swim buddy. Keep in mind the bleah is relative. Part of the problem is my flip turns were feeling slow, and when I stopped thinking about my stroke I slowed down. These things happen.

Last thing, I was looking for a birthday card, and saw this. I took a picture of it and sent it to a buddy. It's not the one I got, but I laughed. It's a good rule for life, and you'll certainly learn something on the way out the other side. 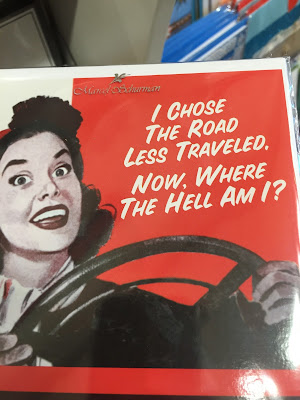