My inner shark came out to play

Back into the salty murky water of Glenmore again today for a lap swim. I had been thinking that a swim there would be good, since I'd be less likely to overdo my shoulders. Then my inner shark showed up. He loved it! He and I cruised past the other swimmers in the next lane. I passed some of the swimmers in my lane, and sometimes they stopped to let me pass. My inner shark was all about chasing them down, in a relaxed sedate sort of way. It sounds strange, but it made sense at the time. Not that he wanted to actually catch and eat any of them; most did not look like a healthy food choice, and my inner shark is a very picky eater. I cruised along, not working too hard, concentrating on a nice stroke.

There was a first along the way. The water is really choppy because they have lane ropes with small buoys on them, not the wave breaking plastic discs. I caught a mouthful of water just before going into a flip turn, and was coughing through the whole thing. Salty water.

Since the pace clock is really hard to see I didn't keep track of laps, but it was about 1.5 K, with some short breaks in there to fit in with my lane buddies. I even managed to fit in some short intervals, 3 x 50 in 45, on 1 minute, and I could have kept going, but there were people in the way. I started with some slower people, then all but one went away, and I drafted a guy for a while, then he went away, and I split the lane with a woman for a while, both of us doing our thing and not getting in each other's way. Then a few more people showed up, slow people, who seemed a bit uncertain about the circle swimming thing. Slow, as in, swimming very easy I could keep up with them as they churned away with swim fins. Perhaps the slow, medium, and fast lanes are more a mind set thing than a clock thing. I cooled down a little and bailed out of that lane. Hot tub at Glenmore is awesome!

On the way out I was chatting with one of the staff I used to know at Canyon Meadows. Nice to get caught up. I'm pleased how it worked out. My shoulders know I've had a swim, but they aren't complaining, and I'm not getting the chest muscle spasms I was getting for a while.

Saturday was good. Planked in the morning as part of the limbering up for a run. It was beautiful out and I nailed the clothes for sunny 0 C. One layer tights, long sleeved top, gloves, cap. 5 K, 35 minutes, nice and easy, though working a bit for the last K. Stretched after, then in the evening did another core session with a 90 second plank. So, on average, I'm still with the plank a day thing.

Traffic is still crazy. On the way out this morning I'm doing 65 to 70 K in a 60 zone on the way out of the 'hood. I got passed by a guy weaving in and out of traffic, doing maybe 90 k. He ran a red light (hey, it's only been red a minute) and and it's good that the guy turning left was paying attention. The stores weren't even open yet! Where could he be going?

The garden is still there in winter, just not as colourful. It's easy to see the colour is beautiful, of course, but I also like the stark winter beauty as well. 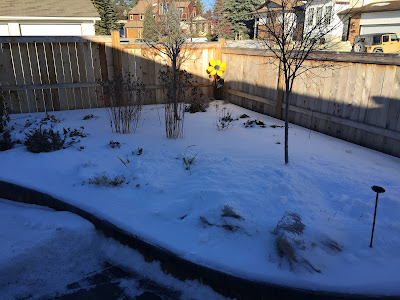 Why is the BBQ uncovered, you ask? BBQ rack of lamb. 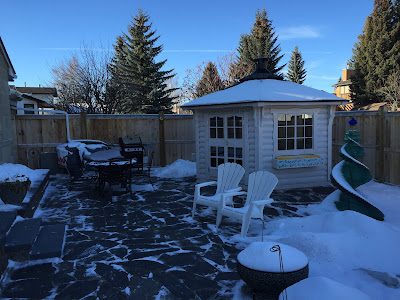 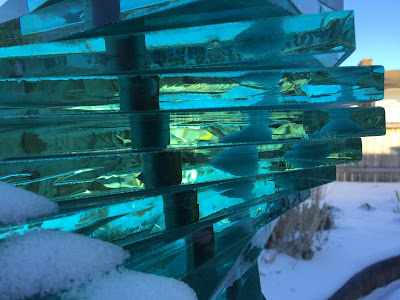 Linda is working on some greenery displays. Photos when she's done. Stay tuned.

Did you maybe miss the recent blog posts? Pre-Christmas Crankies, or The Unmentioned Tusk?