From Suncor to Telus, indoors

Last night just after posting I got these action shots of sunset clouds. This one is dressed up in Snapseed a bit. The wind was so strong you can practically see the wind streaks. 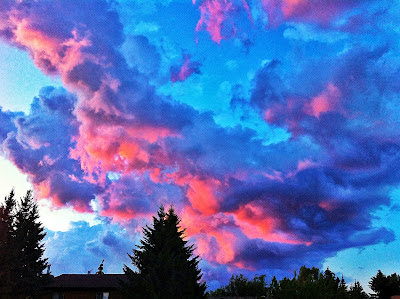 Injury recovery is always a bit of a two steps forward, one step back thing, and today seems to be a bit of a half step back. Things are feeling a bit creaky. It was a long day in the office chair, struggling with a really tedious spreadsheet. No run tonight, but I'm planning to go downstairs for a core workout and some stretching. As soon as I finish this glass of wine...

The highlight was going out for a longer than normal walk at lunch. As I was walking through the park behind the TCPL building I noticed how the bell tower spire lined up with the vertical members of The Bow building and had to shoot it. Then I noticed ordinary people walking through the +15 and had to try it. The building is still under construction, and I don't know that anyone has actually moved in, but parts of the lobby and +15 are open. I strolled through one way, taking a couple shots in plain view of the security guards. Then came back and took a few more, in plain view of the security guards.

Then this dink from the second floor tells me "I can't let you take photos in here." I asked him where the signs were, and who said so, given that it's a public space (if still under construction and some areas taped off, and no complaints about that). He just said his orders were to keep people from taking photos. I muttered "I was just following orders" under my breath, and said to him, "You're the only one saying so." Arrogant piss ant bully. He's probably got a little dick.

Until then, I wasn't sure how many of the inside photos I would put here, but because he objected, you get them all. Screw you photo bullies! What is it about taking photos and video that sets bullies off? Lately it's been the cops objecting, and I know what they are afraid of. That if the ordinary public sees how poorly many of them do their jobs, there would be a lot more noise about civilian oversight for cops.

Here's the view from the outside. Just behind me is that bit of semi circular +15. This park often has people doing Tai Chi in it. I've always meant to learn that, and never have. One thing that is really striking about the building is how well the glass and structural supports set each other off. 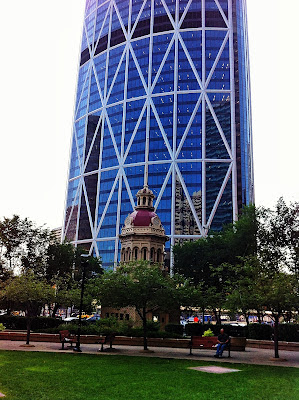 From the Suncor building towards the east. This used to be a blank wall, and now you can see into the bridge. 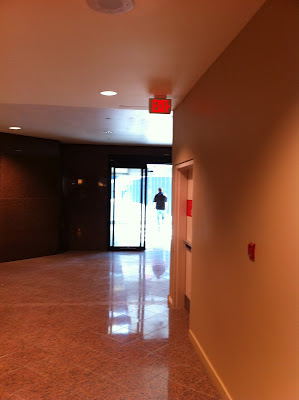 Here's the view from the +15 out into the plaza in front of the building. They are putting up some huge sculpture. I'll take a pic when they're done, if that jerk security guard isn't hanging around. 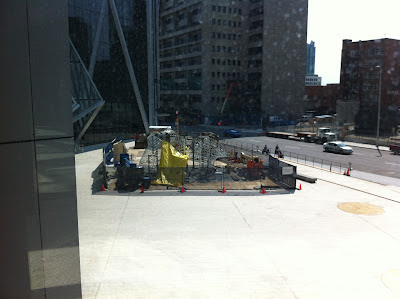 This is the entry into the +15 lobby. I hadn't realized there was so much space between the glass skin of the building and the actual innards. You can really see that in the last couple photos. Supposedly some of those office windows will open, and most of the staff will have window offices. Nice. Hey Graham buddy, I'm sure the time is coming where we have to have a meeting in your office. 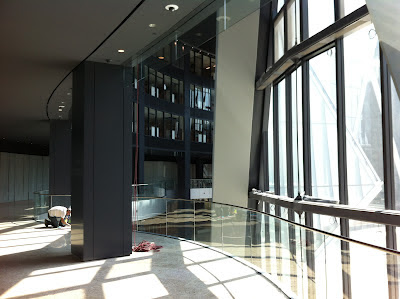 This is from the Telus building looking back towards the Bow building, which you can just see through the glass off to the right. 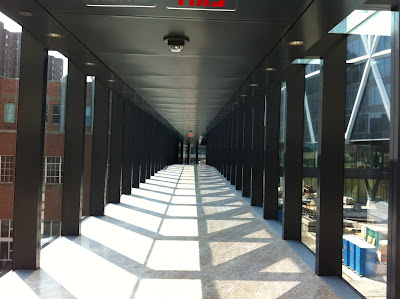 Here's inside looking up. The perspective is a bit weird, I admit. 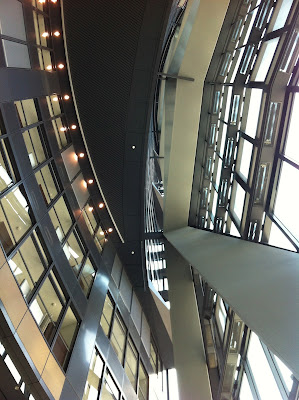 Here's another looking up the other way. Just as I took this the security guard yanked my chain. 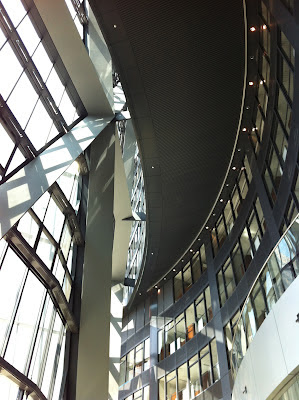 And lastly, to balance out, here is Celina. 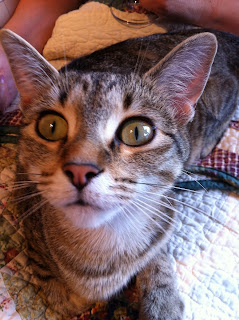