The garage smells of the sea, the library smells like dust

I have no idea why the garage smells so strongly like seawater. Sure, it's been raining cats and dogs here, but that's fresh. There is a distinct sea salty smell just in the garage. Nice. Better than gas, or garbage. It reminded me of our vacations in Nova Scotia, and spending time on the beach. All those years I thought I wasn't a beach person because I sunburned too easily. But beaches are about more than lying down in the sun. I think I need another vacation to the seaside.

I know exactly why the library smells like dust. Books. Tri stuff. stuff stuff out the ying yang. Here's the tidy part of the library. 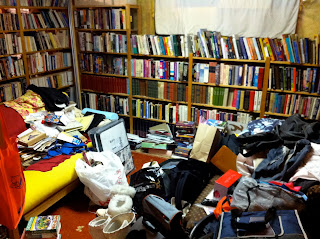 Yes, I'm serious, that's the tidy part. My task over the next little while is get more shelving up and try to bring some order to this chaos. We have a serious book problem. We both like to read, though for some strange reason I haven't had much time over the last little while. What's more, we like to re-read some books, or parts of books, which is why we buy and keep them around. We'll get a piece of a conversation or a scene in our minds, and will want to re-read the bits around it. Can't satisfy that itch using a library. Plus it supports authors.

The resolution on the iphone screen is amazing. I'm not sure I'd want to read a whole book on it, but I think I'd be willing to give it a go, especially if I was commuting on public transit. If I'm sitting at home I'm pretty sure I'd rather hold the actual book. The iPad though, could be tempting. I had one go at setting up the wireless network again, with inconclusive results. I think the network is there, but I don't think any data is actually being transmitted. I think my old base station might not be compatible with my current Mac.

You will be happy to know that fitness has not been abandoned. Wed just about lunch time there was a brief window of partial sunshine. I managed to get out for a half hour bike ride, easy spin around the neighbourhood. I should have worn a jacket; it was pretty cool. My legs liked it.

Then yoga in the evening. Fiona is starting to work on us a bit harder now. A lot harder. Back into my totally [sarcasm]favourite[/sarcasm] pose, downward dog. Then a variant of a held squat that had my quads burning. I think I fell asleep during corpse pose at the end.

Tomorrow is supposed to be nice, partly cloudy and a high of 7 C (45 F) I'll wear a jacket for sure.