Lets start with the human brain. It's an amazing thing, really. Mine amazes me all the time, though I try not to be too recursive about the whole thing. I mean, if there's a me that's amazed by my brain, is there another me that's amazed by me being amazed? Let's end this now.
We're good at figuring things out, given half a chance. Some are better than others, of course. I'm not fond of the brain as computer analogy, but it's clear that some people have more memory, some have faster processors or more processing cores, some have better graphics cards, some respond better to verbal input rather than keyboard.
But regardless, there are limits, though they're different for everyone.
People face all sorts of different situations, and usually have a variety of responses. Some situations are inconsequential, others are not. Some get lucky in their choices, some not. Some have more information to work with to make decisions. Some people have others to help them figure things out.

Lets look at some of those choices. Some people seriously wonder where their next meal is coming from. They might have to choose between the kindness of strangers, to panhandle for the money to buy a meal, or go to the food bank, or show up at the homeless shelter. Or maybe they choose to steal it. They might choose to do without to provide for their child. Tomorrow is another day, and next week is impossibly far off.

At the other end of the scale some wealthy person might agonize over which wine goes with their fillet of endangered animal. After that they try to figure out where in their calendar they should put an invitation to dine with friends, or if they should buy a new super-yacht because their buddy bought one that has more cup holders.

But whatever it is that you're trying to figure out, there's a limit to how much figuring you can do at once. There are even limits on what you can figure out serially. A hard working brain uses lots of energy. There are different ways of reacting to overload. When I get overloaded I tend to freeze up, both mentally and physically, and my preferred option to deal with it is to step away for a few minutes. A less preferred option involves bad language. Other people react differently, and I'm sure you can think of any number of examples of people reacting to overload. Often badly.

But it happens in groups too. Groups of all sizes, ranging from several friends trying to figure where to go for lunch, to international groups trying to figure what to do about climate change. There's a joke about the IQ of groups being the nth root of the sum of the group's IQs, where n is the number of people, and half of that number if politicians are involved.
Up at the top of almost everybody's list lately is a lot of questions and concern about COVID and directly related stuff. If not for themselves, then for their kids or their elderly relatives, and it ripples out from there. Money worries, as if you didn't already have to worry about money. If you're working, will you stay working? Or the opposite, if you're not working and need to be, where to find a job? Kids and school is a huge issue. People go out for groceries because they have to, but many worry about other activities; just how safe is it really?

You've probably heard the phrase, it's expensive to be poor. It's true. Well off people can generally buy in bigger quantities, and have the space to safely store the temporary surplus in their home. Poor people can't put up that much money at once, and even if so, might not have the space to store it. It might be a small difference, but it adds up every time you buy a single serving instead of the family size.

It's also cognitively harder to be poor. You have to think about ways to make your money go further and generally make life go round for you and your family. You worry about something unexpected happening. A small thing like the fees on a bounced cheque, or a parking ticket, could push you into missing other payments, generating more interest and late fees. There are enough day to day things to worry about, and now there's COVID. It's well known it affects poorer people more, mainly because usually they aren't in as good health to begin with. Their systems are run down with the constant stress, tired because they're hustling several part time jobs, and they know they can't take time off work to fully recover. That's one of the ways pandemics work.

I'll tell you a secret. Our economic system is rigged against poor people, poor being defined as everyone below about the 95th percentile, which is almost everyone. The banks, insurance companies, other financial institutions, the credit card companies, (and out of all of them the real vultures are those payday loan shops), and what they all have in common is they like it this way. They want you to have just enough money to service the debt, but not get ahead.

The rich and powerful got that way by exploiting the poor, and manipulating the system to get even more money. They buy politicians to keep the system going. They keep you distracted with bread and circuses (read sports and Hollywood entertainment) so you never notice how badly you're being screwed.
Somehow, the rich have convinced many people to vote against their own economic self interest. Out of the 60 some million people that voted for Trump, most are idiots and fools. A few might like or dislike what he says, but they recognize he's good for their interests and they voted that way purely as an economic decision. Somehow the rich have convinced all those poor idiots that they are millionaires down on their luck this year, and if the idiots vote them in again, the pie in the sky will start. The UCP recently made this work once again in Alberta.

And all that is before climate change comes into it, in all the various manifestations. Hotter weather. More wild fires. Floods. More hurricanes and tornadoes. Rising sea level. It goes on and on. The doom and gloom book says much of the earth is going to become essentially uninhabitable for people, and much sooner than you'd think. The kids today who's parents are agonizing about sending them to grade school are going to have a big problem unless something changes. Unless we make changes.

But even if you wanted to worry about it, most people are stuck in that day to day rut, trying to keep from drowning. There's groceries to get, kid's activities, work, and it all pretty well requires a car in most cities unless you've been careful or fortunate in your choices of where you work and live. Most think there's nothing they can do, and it wouldn't change anything even if they did, and besides, it's really China that's at fault. Or India, or pick the country of your choice, and so it goes on.

But while you'd think all those disasters affect rich and poor alike, you'd be wrong. Very wrong. Let's say there's notice a hurricane is coming. The rich go somewhere else, to another of their homes, or they stay with a buddy well away from the event. The poor have nowhere else to go. The rich are covered by insurance and can easily rebuild or replace from their own funds till insurance pays up. The poor get screwed over by the insurance companies, if they have insurance at all. They have no reserves.

So what happens? Business as usual, which keeps the rich getting richer as they vacuum the nickels from many pockets and build it into stacks of $100 bills. Stacks and stacks, some of them a kilometre high.

What to do about it is a damn good question. Many of the proposed solutions involve changing human nature, and that isn't going to happen easily. Most people respond to price pressure because they have to, so things like a carbon tax starts restricting the amount of carbon people burn. Which does have an impact on the economy, and every so slightly impacts the rich who vociferously object on principle to any drain on their wealth (how do you think they got rich?). Thus the bleats about the job-killing carbon tax, when if you graph the price of gas over the last decade, most people can't point to where the carbon tax was implemented, or removed.

The large scale geo-engineering solutions are scary. We don't know quite enough about our ecosystem to start messing with it by deliberately by dumping stuff into the oceans, or injecting particles into the atmosphere. The phrase "unintended consequences" comes firmly to mind.

I think I'm reassured that out of all the smartest people that have ever lived, half are alive now with calculation and communication tools that were only dreamed of a generation ago. We've got to free them up to do the research. The funds are a trivial amount of money on a planetary scale. And maybe that's what we need to start doing, is thinking on a planetary scale. Remember the Earthrise photo? How about the pale blue dot? There's lots of times I think border and climate discussions should take place in the ISS.

I was out for a walk in Fish Creek yesterday, and saw this log shimmering in the sun. I loved the idea of it being a road, with all around it being dark, and the destination being a doorway that was dark, leading to something unknown. I don't normally revisit images to reprocess them, but I might for this. 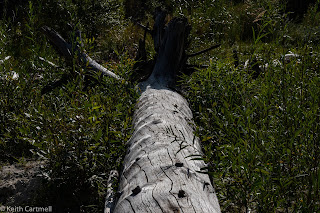 Of the Day
Curtis grooming Celina. 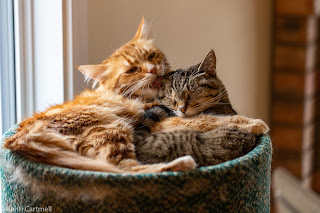 Flowers
Some lilies still blooming in the late summer sunshine. 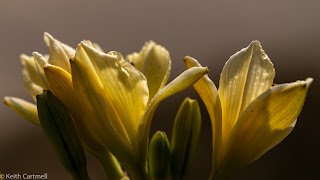 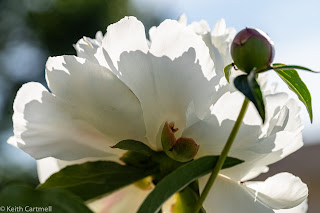 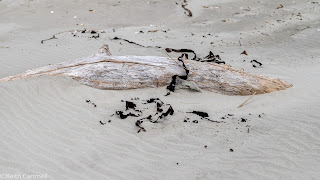