Some days I wonder

As I get older I start to balance two conflicting impulses. One is to look at the idiocy of the world, and rage against it, using logic and experience to influence things for the better. The other is to remember that you should never argue with an idiot because he'll drag you down to his level and beat you with experience. That and never get involved in a land war in Asia, or go in against a Sicilian when death is on the line.

It sure seems like idiots are taking over the political system. Trump is by far the best example, but we're growing some here in Canada as well. What baffles me is many people are clearly voting against their own interests. I can't help wondering what's in their water? I mean, why would any woman or black person vote for Donald Trump, excepting those already in the 1% where the money balances out the minor stings (to them) of misogyny and racism? Without their votes he wouldn't be elected.

And stop saying, "but Hillary." Had she been elected I'm pretty sure she would have run a moderately right wing administration, more of the same old, same old, by people who have been running things for several generations at least. Yes, those people are taking way too much along the way, but neither are they rocking the boat so badly as to risk swamping the ship. Plus, as politicians go, near as I can tell, she is about average for dishonesty. Trump is in a league of his own, making our most lying politician (Harper, hands down) look like a Boy Scout chump, yet he seems to be getting away with it, at least so far. You know it's bad when the LAWYERS insist they have two people in the room, so they have some support when he says something didn't happen.

But lets talk about ordinary people. At the open house for the ring road I was eavesdropping on some of the conversations. There were lots of questions, of course. Some could have been answered from the material on line. Some of it was on the material right up there in front of them, though some of the print is really small. Some of the questions involved comparisons between then and now, or now and the future. Lots involved specific details about the plans that were not clearly addressed in the documents available. All of this is fair game. Not everyone has the time or the patience to wade through all the material, some of which is out of date.

Then there were the people complaining about the road, wanting construction to stop. As if. People complaining about not being consulted, and not being mollified by the 50 year history of the road development. (Much of which, I must admit, involved nothing happening over long periods.) Just because they hadn't personally been consulted is no reason to stop. It just demonstrates the need to pay attention to what our elected representatives are up to with our money.

A few of them had "better" ideas for the billions the road will cost, as if that money were handed out on a platter to be spent as desired. One person was on about the bridge over the Elbow River west of the reservoir. You'd think we'd never successfully built a bridge over a river before. One engineer did an eye roll when someone got up in his face talking about big oil, and mega-projects that would bring about the End Times, and that money should be going to build churches. At least the Freemasons or the Trilateral Commission didn't come up, and neither did Mercedes Man and the anti-BRT crowd.

Meanwhile, we are building up to complete road construction chaos here in the SW. It's going to take a lot of patience some days, and I fear someone is going to pop a gasket along the way. I've already seen people shaking their fists and rocking their truck back and forth. There was a BMW driver who insisted on driving down the dotted line on the 14 St to Glenmore west merge lane. As people came up in the right lane (which ends in a couple hundred metres with zero forgiveness), he would swerve over and try to block them from moving forward. Meanwhile he was behind someone, and couldn't move into the next lane left to zoom ahead. There he was, swerving left and right, probably cursing up a storm, and complicating the life of everyone around him, all on too little coffee.

There's even parking lot rage. I was in the pool Tuesday afternoon, for complicated reasons involving a yoga class and visiting my favourite print shop. (Yes, the swim went well!) There were lots of cars because of a synchronized swim event. One woman had come out to her car, and I think she was either dropping off or picking up stuff. Meanwhile someone thought he was about to score a plum parking spot, and was waiting, blocking traffic. There was some bad language shouted out the window when she locked the doors and started walking back in. (Yes, I'm being accurate with pronouns here. No, I don't know if he was driving a BMW.)

Yes, I use Facebook, as do at least some of my readers. It's all locked down, or it was when I last looked. I never respond to polls, or do the copy and paste in support of blah blah blah, or play any of the games. I had to unfriend one person who was badgering me to play and wouldn't take no for an answer. I try to repress the advertising, do very few page likes, put very little of my personal interests on there, and run it though social fixer. It still makes me grind my teeth some day. Yet people are surprised their data was stolen. Duh! If you aren't paying for the product, you are the product.

We watched the first season of Billions over the last week or so. I'm liking the show, enjoying the ambiguity of good guy / bad guy. There's lots of twists and turns, more than a few conflicts of interests, and lots of unethical behaviour. The other night I drifted off to sleep wondering what I'd be like if I was a billionaire. To have more money than I can conceive of spending. What would I do with my time? What would I do with the money? I'd like to think I'd be a force for good, like the surface or public personal of the Bobby Axelrod character. Then again, who knows?

As a reward for chewing through the mini-rant, you get two photos of Curtis. 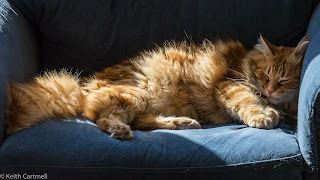 Embiggen this and look at his eyes. 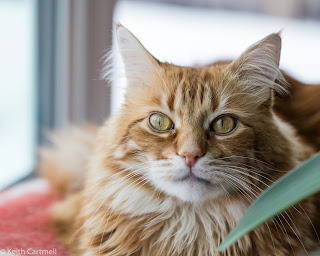