Well fuck you too Snapseed. Once upon a time you were a wonderful little program. Simple. Intuitive. Fun. Powerful. Exactly what I needed.

What are you now? Enraging. The interface has become cryptic and complex. I've got a very nice edited (at last) version of the cloud photo below. But is it anywhere I can see it on my laptop? No. NONONONONO!!!!!

I can see it on the desktop after a complicated process I'm not sure I can repeat. Eventually I suspect I'll have to save the blog to draft, and edit it more on the desktop. What a pain in the ass. The old version just saved the edited photo to the camera roll, and from there it would be (eventually) shared (sometimes) with the other devices at the variable mercies of photostream. I saved the photo a bunch of times from the iPad, trying different options. None of them, NONE, did what I thought it should. I never saw the edited photo on the iPad anywhere but in Snapseed itself. So much for Google not being evil. Screwed up another good program.

Plus, trying to figure this out with a cat yelling at me. Grrr. I was driven out to the lodge. I just want some peace and quiet so I can think. Even in the lodge I can hear my neighbours talking loudly. Maybe my next project will be to build a sound proof writing office in the basement. It doesn't have to be big, just quiet. My own little anechoic man cave.

Just lately I'm finding a lot to be annoyed about with devices in general. While writing in Safari on the laptop for the blog, I can't see the cursor anymore. I don't know what happened to it. On Firefox, I can't stay logged into the blog. It seems the photo I want in the blog is never on the platform I happen to be writing on. Drop downs and translucency annoy me. It seems like you roll the mouse over anything on a web page and something pops up at you, and this is with the pop up suppression turned on. I've had websites bark at me because I've got cookies turned off, or I won't put in an email, or I keep closing ads. Don't they get it? There are NO CIRCUMSTANCES I want to be shown an ad. None! If it's a popup by definition I don't want it. There are a few blogs I've stopped reading because I can't find the text buried in all the ads and photos.

Call me old fashioned. I want text, unless I've deliberately clicked on a video. I can skim through text far quicker than a video, providing I can find it. And whatever happened to dark text on a light background? Whatever web designer thought small, light gray text on a dull white background was a good idea needs to have terrible things happen to them for an eternity or two. Maybe three. And while I'm on about it, what's with the small text boxes? Some blogs have those too. It's like they want to make it difficult to comment.

It drives me nuts when programs try to be "helpful" and I'm looking at you, Excel, but you are merely the head of the line. At the moment I'm thinking the biggest attraction to retiring is that I wouldn't have look at xl. Why yes, the xl I'm dealing with at work is a complete dog's breakfast, why do you ask?

I've been systematically going through and turning off the %$#@!youautocorrect everywhere I can. My timing is just fast enough that I've hit the space bar or punctuation, accepting it's proposed change because the little correction suggestion hadn't appeared yet. Then I have to go back and edit. The functionality is backwards. I want it to reject the suggestion unless I click to accept it. I've given up trying to get into the phone with the fingerprint, it never works more than a day or two after putting in a new one.

This was taken just after a very nice run in South Glenmore park, looking towards downtown. 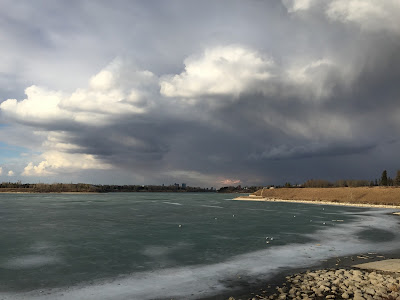 Here is the tweaked version. 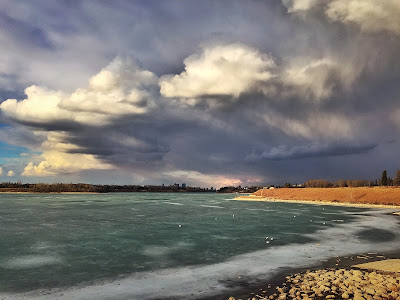 I was driving past the library the other day and realized I hadn't been in for a while, and decided to scope it out. We used to go weekly, and they told me I hadn't taken anything out for almost 2 years. Wow. But while there I found a Blue ray copy of the BBC series Miss Marple, with Joan Hickson in the title role.

As a digression, this is about as perfect as casting gets. Hickson is a treat to watch. Plus, this was one of the last TV series shot in real life, so to speak. They found a village and dressed it up. No digital trickery. It's lovely.

I've seen these any number of times, but still got the disc. There was the magic word "remastered" that caught my eye. Here's a scene from the old version, taken from a still image. Look at the wallpaper and the receptionists face. 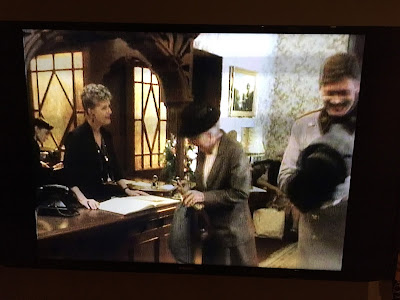 Now here's the blue ray image. Wow! The rest of it is just as clear. I thought the one car was sort of a gray blue, and it turns out to be a brilliant royal blue. We're going to see if we can find the set at a reasonable price. 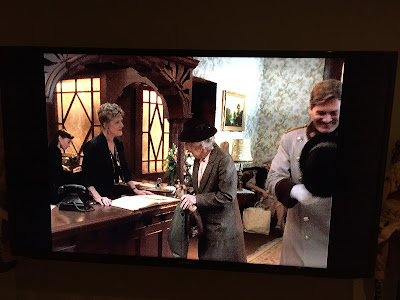 For all that the word pansy has terrible connotations in English, the plants are tough little guys. This is what's come up in the back garden. Not so long ago that had a big pile of ice on it. 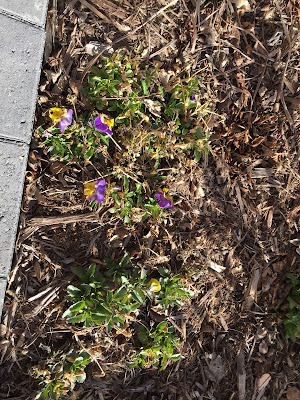 I think some of you missed the AMA I posted earlier this week. Not many readers.