I ran in shorts. I loved it. It turned out to be my fastest 5 K since last September, 32:24. My legs wanted to run faster yet, but my lungs wanted to see the bear first. This was mostly a little faster than chatchat pace, but not race pace. It felt really good.

So the shoes thing. I'm really thinking my old day to day shoes were causing my leg tightness. Every day since I stopped wearing them my legs have been feeling better. This last week is one of my bigger run and bike volumes, and they're still feeling good. Should have done this a long time ago. Here they are. Classy, yes? 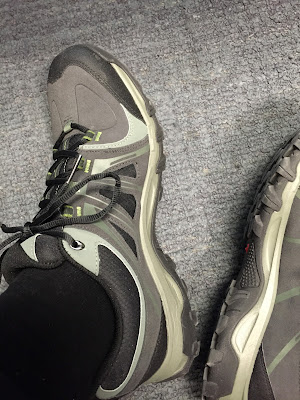 Biked on Sunday 1.5 hrs. Lots of endurance pace at different gears and cadences, with a little tempo, and a tiny bit of really hard. The bike is feeling pretty good these days too. Can't wait to get outside. Stretched and some core after.

Monday was a swim sharing a lane with a drafting jerk, till I got sick of playing. It took me almost a K to get warmed up and feeling like swimming. About the 900 m mark this guy gets in and pushes off in my draft. I pulled away a bit, but it was just a little faster than I felt like swimming. I settled into cruise hoping to maintain the distance between us. I'm still swimming the same pace by the clock, but he sped up and banged my toes a few times.

I let him pass, then settled into his draft. It was kind of funny. He kept trying to swim faster to lose me, but in the draft it was easy to keep up. He couldn't pull away from me. Nor would he stop and offer to let me lead again. He did sloppy inconsiderate flip turns trying to slow me down. So I cruised along, contemplating passing him because I'm pretty sure I could, but deciding I didn't need to. The people in the other lane left, so I gave him the space.

Ended up swimming 1.75 K or so, but I'm not sure of the time. It was a clunky start, and got better.

The next book arrived. Sorry no picture. Linda has it. She isn't coming to bed till she's done. Gentleman Jole and the Red Queen by Lois McMaster Bujold.

Change of pace here. Two quick rants, one fun, one serious. You'll know which is which.

One of my buddies has given up Facebook for a month. Today, looking at my feed, I understand. It was almost entirely reposts or shares, and almost all of them were stupid. One of them about toast, for crying out loud, kept adding comments almost faster than I could scroll past it. Even my reliable buddy who is normally in tune with what I like batted a couple of clunkers.

Maybe I'm just feeling more curmudgeonly than usual, but it seems that the quality of both Facebook and Twitter has gone badly downhill recently. Anyone else having the same experience? Anyone give up social media and regret it? Or was it the best thing ever?

The big news up here is about some teenagers that trespassed onto Canada Olympic Park property. Somehow they thought it was a good idea to go down the bobsled track.
At 1 in the morning.
On a toboggan.

2 of them died, several of them were seriously injured.

My opinion on this is cold and harsh. The world is a tough old place that doesn't have much tolerance for stupidity. Not so long ago you could do everything possible right, and still die from bad luck just being in the wrong place at the wrong time. Like being next to someone in 1918 that sneezed, and you got Spanish Flu and died a few hours later, probably infecting other people along the way.

Our current society is one of the safest places ever in all of human history, idiot drivers aside. Yet Fail Army documents no end of people doing very stupid things, with many of them probably suffering a concussion or dental injuries. It's clear they didn't have the first thought of what could go wrong. We might end up knowing what the survivors of the midnight toboggan ride say they thought about at the time. Trust me, it will be teenaged boy stupid.

And yes, there's a few stupid things I did, and I got lucky on them. There were a bunch of others where I paused that vital second, and thought "maybe that isn't such a good idea."