The murk and the sunshine

The wine kit I started yesterday is doing fine. The yeast is starting to work. Probably Monday when we get home from work the house will smell a bit of winey yeast. This is a good smell.

Curtis's paw continues to improve. He wouldn't hold still to take a picture of it, sorry guys.

There's an event at Talisman today so we tried Acadia. It's been a long time since I swam in a City pool. Well, technically Talisman is a City pool, but you know what I mean. It was warm and murky. As in, really warm, and really murky. People disappeared into the murk about a third of the way down the pool.

I talked to a guy setting up to swim in the fast lane. He seemed dubious about me joining him, but we started circle swimming. His breast stroke was surprisingly fast. I lapped him twice in the half hour I was swimming. I don't think he really quite believed I could swim faster. Another fairly fast lady was sharing the lane as well, and she was really good about getting out of the way. I talked to the guy after, and he said he'd been working pretty hard trying to keep up, and thanked me for the good workout.

Michelle is a modest humble girl that would never blow her own horn about how much her stroke has improved, but HOLY DOODLE people, has her stroke ever improved. She can say what she likes about coaching tips, but she's the one doing it. The improvement is enormous! If she keeps improving at this rate, she will soon be swimming faster than me.

After the half hour swim we worked together a bit. It's really hard with the water this murky. Then some drill and technique work for me. The pool thinned out and we chatted a bit with some of the people in Michelle's lane. The last thing was a fun surprise for her, and like showing her fist drill and being astonished how well she did, she did this astonishingly well. Better than I did when I started. Look for the story on her blog.

The last few days have been warm here, and today is essentially a summer day. 15 C (60 F)! I had to try running. Had to! Shorts and a tech shirt. 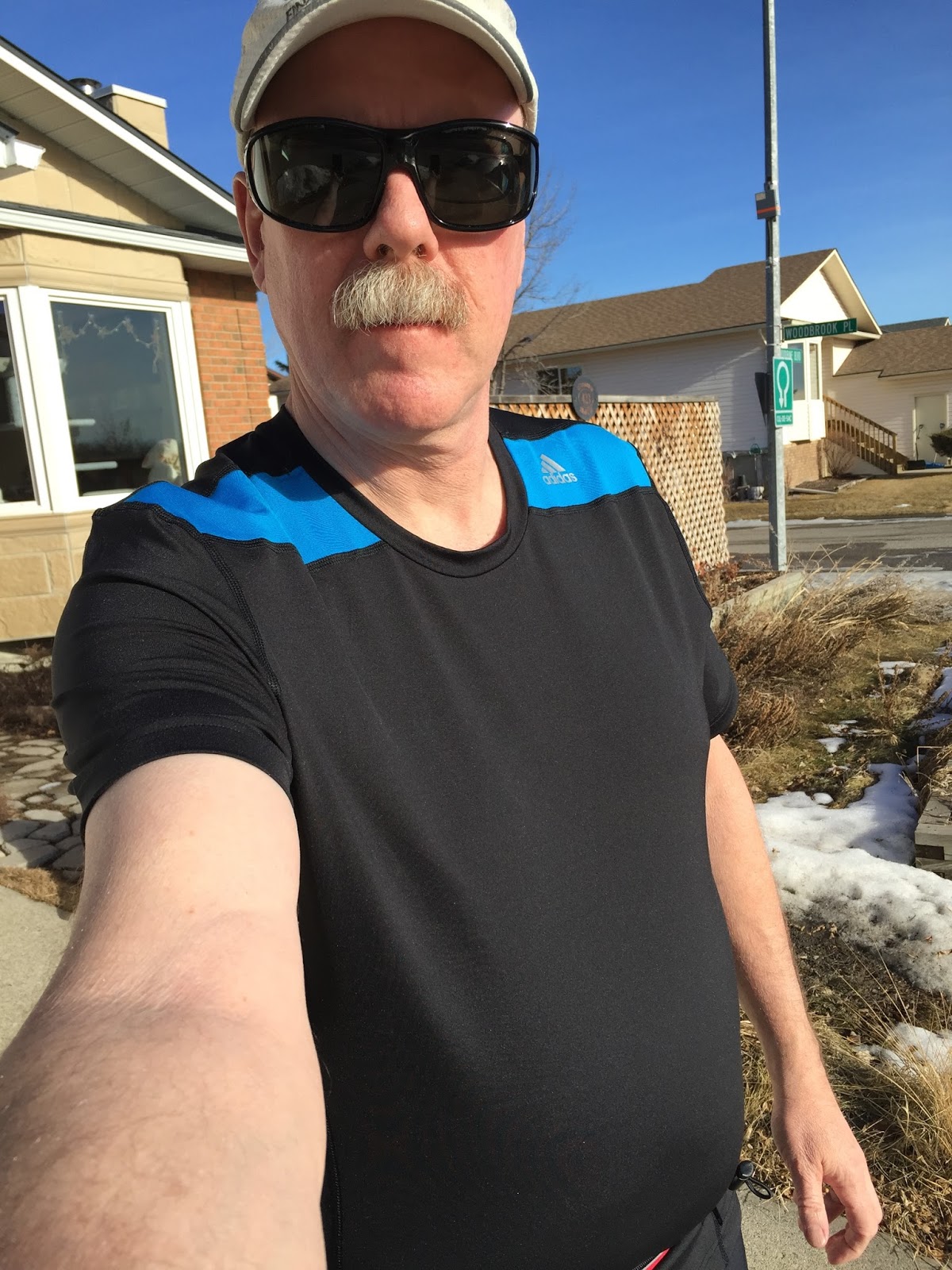 I didn't really care much about pace, and looking at the app after it turned out to be a bit quicker than I expected. My breathing was a bit harder than I expected, but my legs were happy with the pace. I was trying to take short fairly quick steps to be easy on my quads. My right one talked to me a bit, and I took a short walk break in the middle of the 4K run. Just under 30 minutes.

During a good long stretch session I got a wonderful hip thunk from my right hip. So pleased about that. Let's see what my hips and legs think tomorrow. And just like that, another weekend is gone.

I've been working on some thoughts about human brain power, and that will be coming soon to a blog near you. Keep an eye out for it.