The last time I swam on Friday afternoon at Talisman it was calm. Peaceful. I had the whole training pool to myself and I had an amazing swim. At the time I thought it was because I'd been awake all day and had a good lunch.

So when Friday morning came and I was stiff and creaky I decided to go straight to the office and swim in the afternoon. That wasn't a mistake, I don't think, but it wasn't as I remembered it. The place was full.

I found a lane and asked the 2 people that were just chatting at the end if we could swim circles. The woman was ok with it, but the guy was a jerk, and didn't want to. I think the two knew each other, and he said, HE SAID, her swim was almost done and if I could wait a few minutes we could split the lane. All right, I guess.

He was all over his side of the lane so I had to keep an eye on him. My swim wasn't so hot. I was trying to maintain my CSS pace workout, and not having much fun. I could tell my heart rate was too high for what I was doing, and my breathing sucked. I did what I could and called it a day.

Sunday I was in the pool again, and as sometimes happens, Michelle joined me. But first I had to get out of the house. Curtis was guarding my swim bag. He tells us he wants to go hunt for a mouse because we aren't feeding him properly. Anyone who has tried to pick him up knows that's not true. 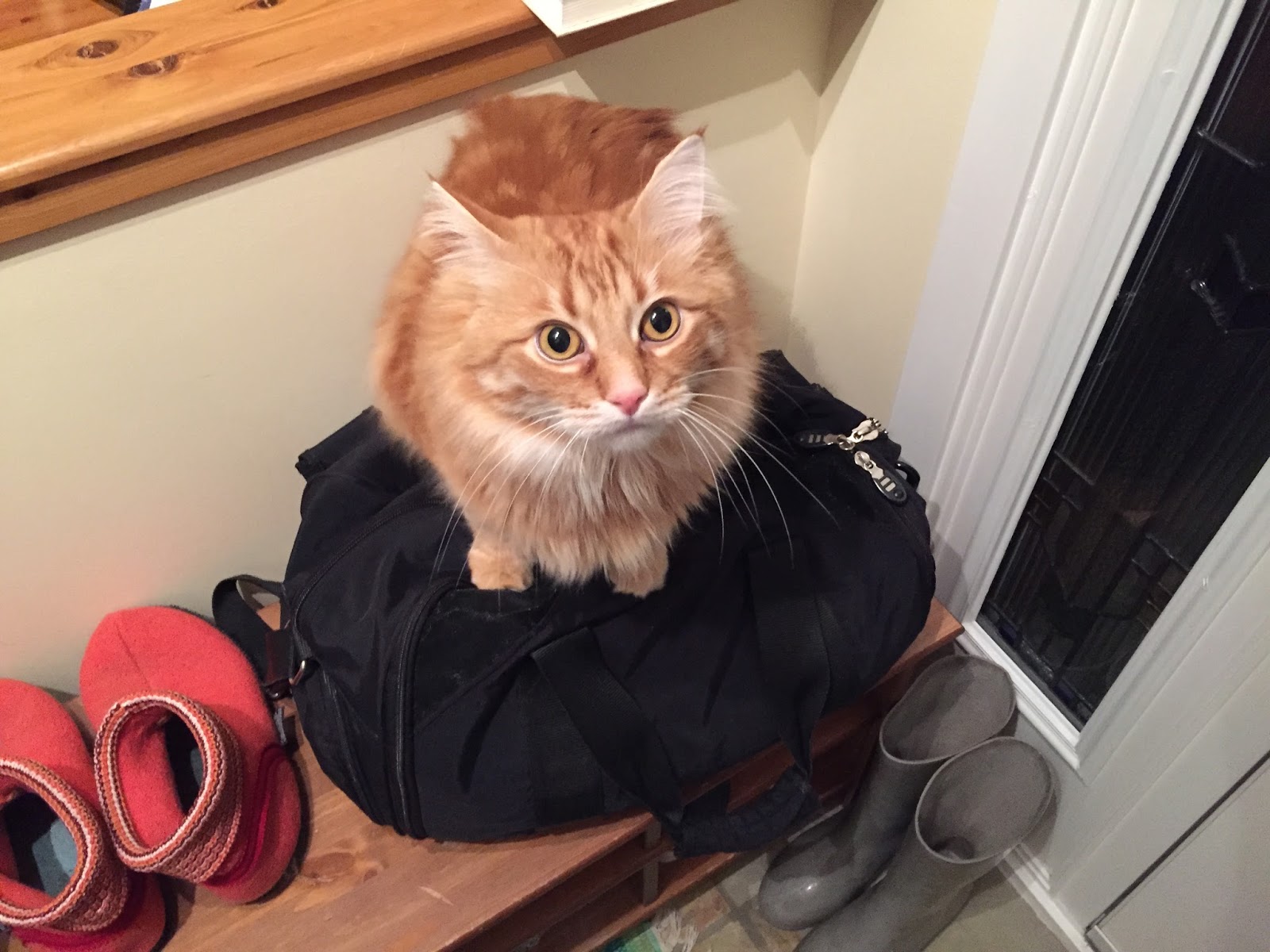 She keeps apologizing for taking me from my swim, but I'm finding that coaching her is helping my own technique. Firstly, you need to know she is doing extremely well! For a while we were working on her stroke, trying for a more vertical entry and working on catch. Right now she is windmilling a bit. A lot. But now the windmill is going around all the time and not stopping to breathe.

We played a little bit with the position of the elbow bone. Most people, if they put their arm out in front of them, the boney part of the joint is pointing mostly down. This makes it totally impossible to take an efficient swim stroke.

Try it for yourself, even if you aren't a swimmer. Put your arm out in front of you as if you were passing a plate of food to someone, palm up. Now turn your hand over. With your other hand, feel to find out where the boney part is pointing. Probably downish.

Now rotate that hand all the way so the thumb is at least straight down, more if it will go. Feel where the boney part of the elbow joint is. It will probably  be pointing out to the side. Perfect. Now leave it there, and rotate your hand back to palm down.

Now you can bend your elbow to get a proper catch, and get your arm vertical in the water out in front of your shoulder. If you're in the pool, catch the water, and slide your body past the molecules that are anchoring your hand. Again and again, till you don't have to think about it anymore. Except you will. Nobody does it as well as they like, and the ones that think they do have coaches that are telling them they aren't.

We worked on that, and her visualization was to pretend there were people crowding her in the lane, right beside her, and she needed to have her elbows out to guard her territory. This seemed to work.

It works for me too. I'm swimming faster. Today I tested myself, 50 is 38 seconds, which is about as fast as I can swim, and 100 m is 88 seconds. Those were done separately. This is just about as fast as I have ever done it. The only documented time faster is when I was chasing Lorraine Churchill in a swim camp. That was 83 seconds.

We did a fun thing near the end. She hung on to one of my feet as I pulled her down the pool while she mostly did a one arm stroke drill. The idea was to begin to get the feeling of water moving past her faster and start to work on the idea of drafting. She liked that, and I told her it was her turn very soon, to pull me. Haha she laughed, as if.

So I made her do it. I floated on my back, lightly kicking just enough to keep my feet from sinking. She pulled me all the way down the pool, much to her amazement. This helps build a stronger catch and pull stroke.

So that was fun and a great way to start the day. I puttered around the house the rest of the weekend, bleaching stained wine bottles, more tidying, and trying to plan where some more wine racks will go. We've got 11 kits coming, and I'll need to find the space for about 200 bottles more. Decisions, decisions.

I felts so sorry for Linda once I got home on Friday. She had wanted to use my old iPhone 4 to take some pictures of a pretty sunrise. The resulting 25 second video is hysterical. I've watched it again and again. Somehow she turned it to the front facing camera, and then turned the video on. We see her eye, and bits of the sky, some of a nice sunrise, and her muttering "how" a lot. This is a still from the beginning of the video. It would be worth my life to post the video itself. She is convinced that technology is out to get her, and I can hardly blame her, given her various adventures. 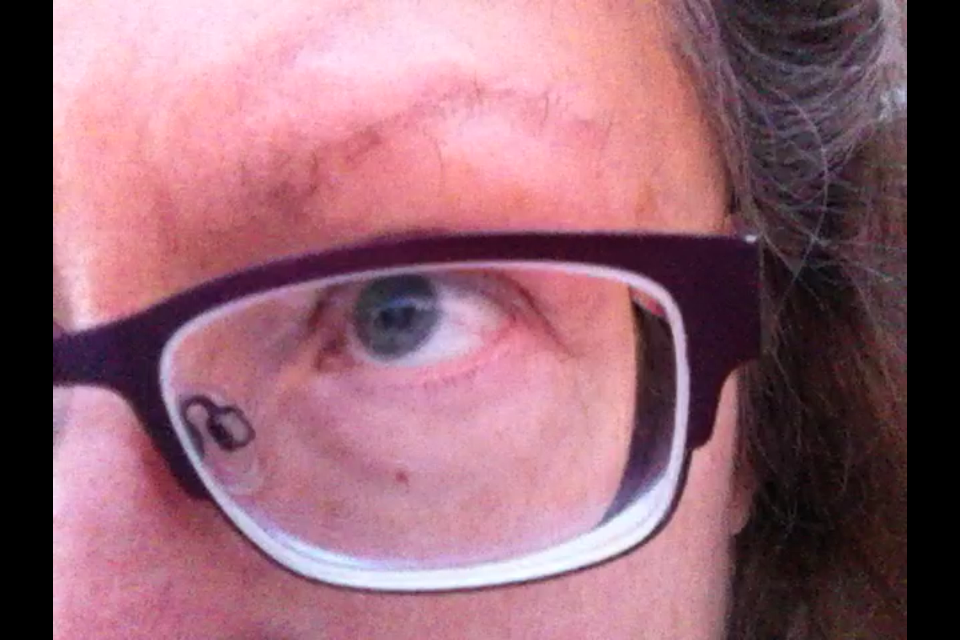 Later that evening our financial advisor took out out to dinner at The Nash. This is a new restaurant in the old National hotel in Inglewood. This was a very, very seedy bar once upon a time, and before that it was a classy place. It's sure classy now. The food is great! I think we were the oldest people in the place when we wandered out after a wonderful dinner. Not cheap, but very good.

Just to finish off, here are some photos from the weekend. The first is the Saturday sunrise. It was a beautiful reddy orange that doesn't really show up in the photo. 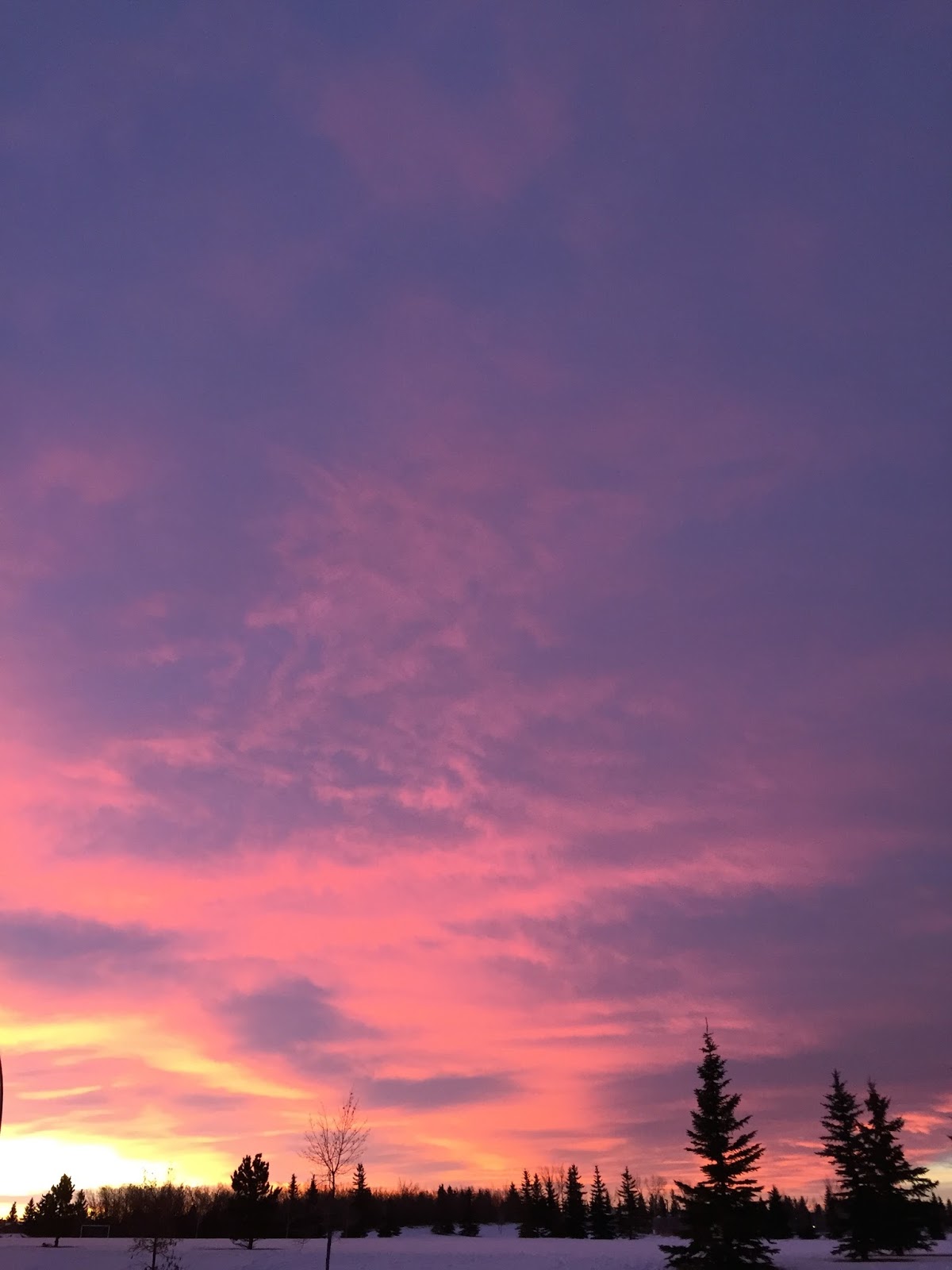 This is the tail end of the clouds as a chinook blows in. There were all sorts of little layers and ledges that I hope show up. 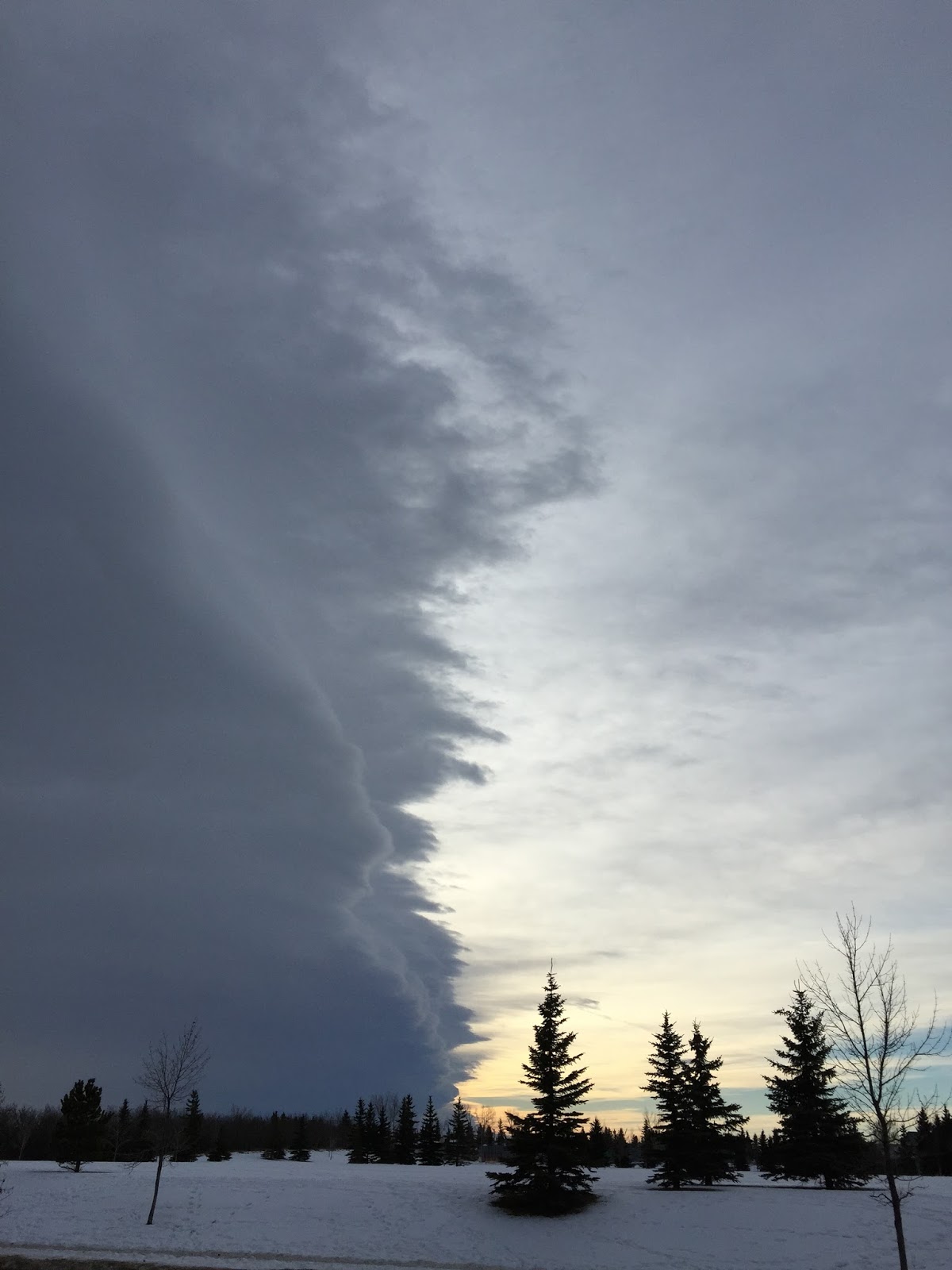 And lastly, Linda showing that she can conquer the camera phone and make it do her bidding. This was just before I got the shot above. 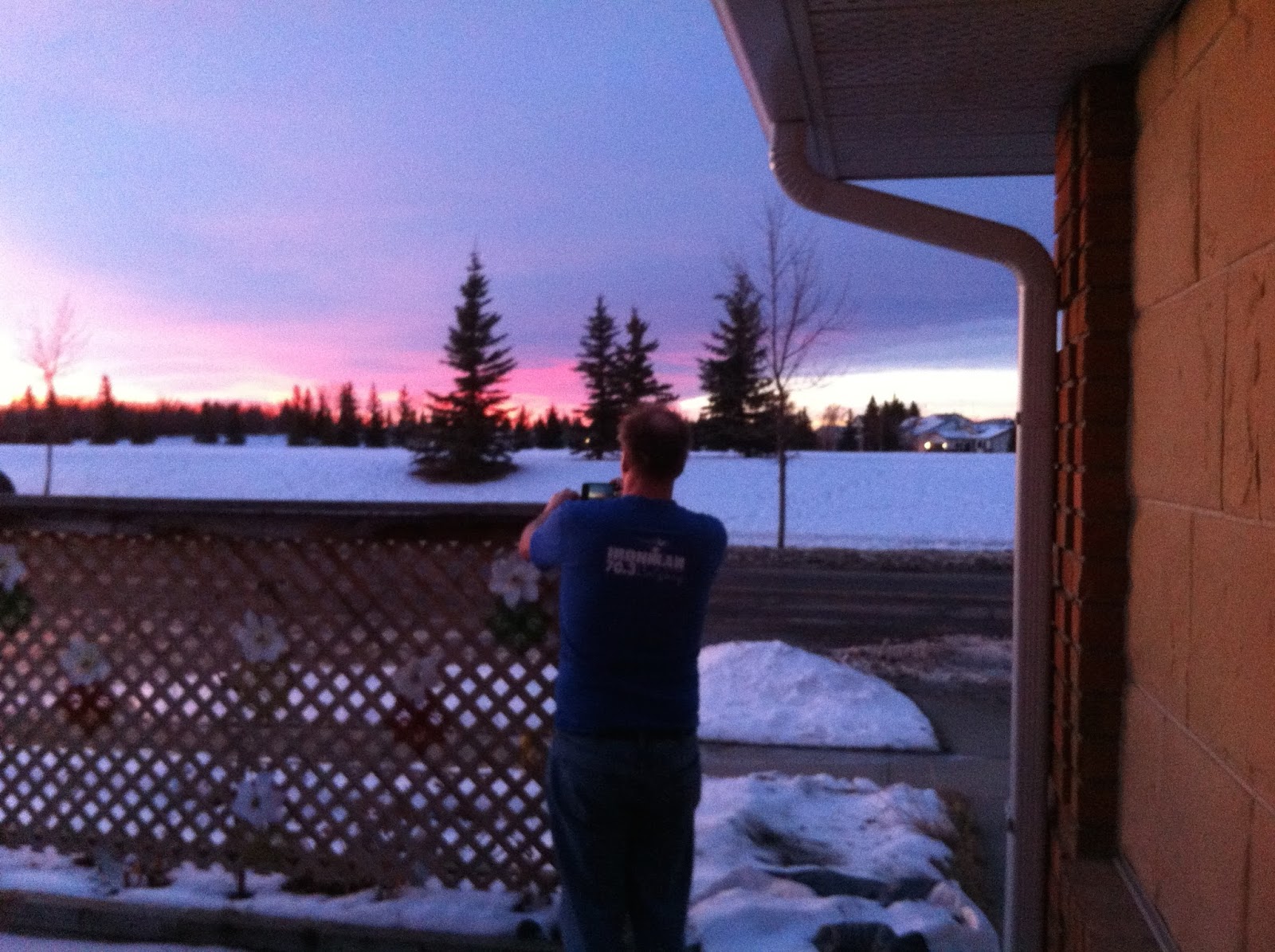