I took TWO for team SUAR

If you are not a runner or triathlete, you might find this a little too much information.

If you are, but don't know and love SUAR, especially this post, mine might well be too much information.

Don't say I didn't tell you.

Normally my guts are rock solid during races and workouts. I've only cut one run short because of urgent biological imperatives of the solid nature. Even during IMC about the worst I could say is my guts were feeling mild distress. There's been a few workouts where getting into the bathroom once home was an important priority, but that's about it. Yes, I am grateful.

I was thinking of running for about 2 hours nice and easy, for my last long run before Fernie. I limbered up and stretched longer than normal, then walked out to the path. I had originally been thinking of running up to the Weaselhead and back. That's a nice run. At the last minute, the very very last minute I remembered all the bugs and decided to run down into Fish Creek instead.

How very, very fortunate for me. And any bystanders. And the environment at large.

As I started running I could feel a bit of slosh tummy. This is a little unusual, but not unknown. I carried on, trying to run smoothly. I experimented with slightly different strides, and varying degrees of core clench. The slosh gradually got worse and worse. Every footstep began to sound like a drum, with the echo in my guts. Not my tummy, my guts. Oh oh.

Half an hour in and it wasn't just clenching the core. I was beginning to feel pretty sure I wasn't going to make it to the planned of my run without some pressure relief. Let's just say that despite the large supply of trees and shrubs in the park, and some well known guy habits, that wasn't what I was looking for. Another 10 minutes and I was mentally calculating how far ahead the nearest washroom was, and hoping it hadn't been closed for the season. I got there right on the 49 minute mark, and barged in. I'll never know if that door was locked. Sweaty shorts are hard to deal with. There was even toilet paper! Our tax dollars at work.

All right, I was thinking, there's a first time for everything. A few minutes later I was off again. I turned around right at MacLeod Trail and headed back, starting to feel that ominous slosh again. Not as bad, but there was no way I was going to try to run an hour back. So 20 minutes after the first visit, I was back in the saddle again, so to speak, playing the organic tuba. Unbelievable! Twice on the same run. Pity the colonoscopy people weren't there with their equipment. As a side note, there are no washrooms at all on the run up to the Weaselhead, and a lot of open space heavily used as a dog run.

Very shortly after starting out again, I saw Darryl on his bike. We stopped and chatted a few minutes. I haven't seen him in some time and it was nice to catch up. I had a few minutes of nice running after that, and then it started getting tough. My legs started tightening up, and another first for these shoes, I was finding a hot spot on the ball of my foot. I got most of the way back to the house, did a few walk runs to give my legs and guts (yes, more slosh!) a break, and did a good cool down walk. It was actually getting quite cool by the time I got home. The only thing different I've had to eat lately was some Columbian Chorizo sausage for dinner last night and lunch today.

One of the other coincidences happened yesterday, but doesn't involve workouts or anything. I used to work with a guy named Garry about 10 years back. He now works just across the road from me, for Conoco-Philips. I've tried off and on to get hold of him, but he travels a lot and is really busy. Yesterday I ran into him before work, and got caught up a little bit. Then, believe it or not, I saw him again, by accident, at the end of the day.

On the way home from work today I stopped in at MEC and picked up more NUUN, and some of the Powerbar gels. People have said they're better that Gu. 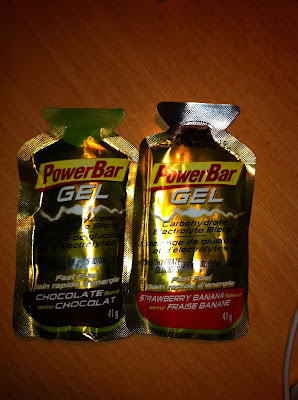 I had the chocolate at the half way point of the run, and liked it. It's not as thick as Gu, and tastes pretty good. Not too sweet. One tiny little swig of water washes the last of it down, unlike Gu, where you need several large swigs and good swooshing action to wash it all down, and even then it fights to come back up again. I'll try them over other runs and bikes and see what I think, but even now I'm thinking I'll try to take some with me to Fernie.

And because Xenia asked so nice, here's a photo of Amelia and Snow Leopard. She has been itching for a chance to write a guest blog. Stay tuned. 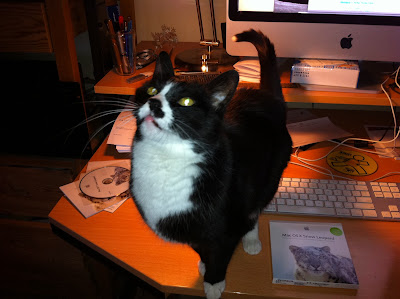