So the IM training thing isn't happening anymore, but that doesn't mean I've become a total slug. During our New Zealand trip we walked several hours each day on a beach. Usually 8 to 10 K, several times over 15K, and I think one was about 20K altogether. There's nothing in the world like it! Since getting home we've been walking almost every day, about 45 minutes to an hour at a brisk pace. For us, that's about 10 minutes per K. A little slower if I'm distracted by photo opportunities, or it's icy.
Last year was a big push to get the nearby section of ring road done, so it was fun to walk along the berm and see the progress. It isn't quite done. The section from near us over to highway 2 is supposed to open in 2021, but I haven't been able to find any more specific dates. The other piece that isn't done is the sound walls. There's some stakes up to show where it's going to go, and I've seen maps. They say it's going to get done in the spring.
Some of our walks might get detoured by sound wall construction, but it will be interesting to watch it get made. I'll probably take photos of it. We might be forced to walk elsewhere, like perhaps down in Fish Creek. Oh, the hardship!
I'm of two minds about the sound wall. The view west from the berm in previous years ranges from so-so to spectacular depending on the weather. Now there's a major road there and a utility corridor with lots of big power poles getting in the way of the view. A Costco blocks part of the view now, and next year construction starts on a mall. They say it will look nice.
Once the sound wall goes in, the view goes away for much of the path. On the other hand, the people living along the road get a quieter home. Except some of the homes most impacted are not getting a sound wall, which makes no sense at all, though they say there will be more noise studies and blah blah blah.
I get that it's a tradeoff, and that other people might feel strongly about it, one way or the other. I could easily be saying that I live far enough from the road that the noise doesn't affect me, so I don't want a sound wall taking away the view when I walk there. Lots of the residents along the ring road have mixed feelings about the road. Some have extremely strong feelings on the topic, and I can't blame them. A few homes have had their resale value dramatically reduced. Reduced as in, who in their right mind would buy that home unless they have a traffic fetish?
But for the rest of us, I'm thinking and lots of other people are thinking, it's going to be good for property values. For decades Woodbine has been on the SW corner of the city. Drive out of the neighbourhood and you're out of the city on the way to the mountains. The downside was that all the amenities were in one direction. We were on an edge. Now there is going to be stuff to our west, and we'll no longer be an edge. That Costco is far busier than I would have expected, and maybe the other new stores will be as well. Some people might even discover a great bakery in Woodbine.
You can see a bit of the view here, complete with part of the Costco (and yes we like having it so close) and one of the power line poles. There was a strong chinook wind blowing, explaining Linda's hair. 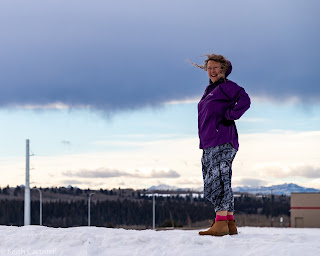 This view, such as it is, will go away when the sound wall is installed. This is the exit from Anderson to northbound Tsuut'ina Trail. 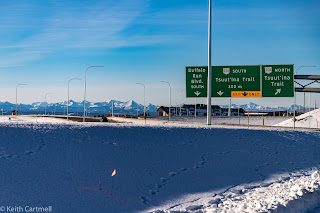 As will this view. 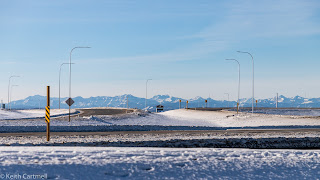 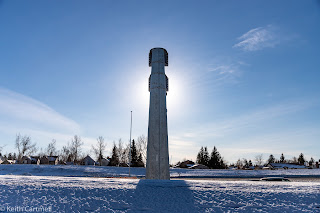 This one won't, it's from the pedestrian bridge over the highway. Let's just say some careful composition went into this shot. 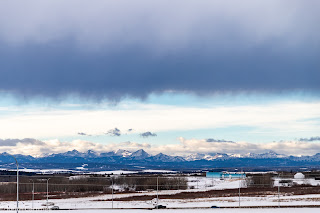 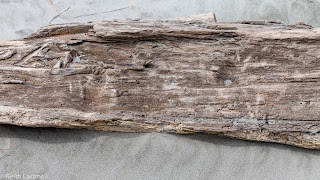