This was actually taken last week during a photo ramble. The inversion had mostly gone away. It was really murky here for a while, quite aside from all the snow. This is from way south of Calgary. 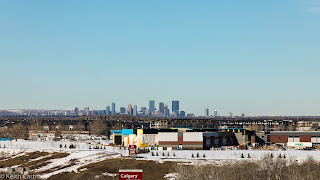 On the same ramble, I found this bench, near the ones featured earlier. It's lovely when there's no murk to obscure the view. I wandered along the path trying to find a view of downtown, but that didn't work out. 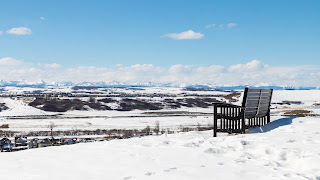 A few days later I'd visited Fish Creek Bridge 1, and found this view of the river. You'd think I'd make things easier for my readers by putting all the photos from a ramble into one blog, or at least in chronological order. Not so much. You'd get bored with the simplistic representational unity of it, when my thoughts bounce all over the place. That's why you guys keep reading, you never know what you're going to get.

I hung out on the bridge for a while, listening to the creek trickle over the rocks, and trying to ignore the nearby car noises, and the somewhat more distant sounds of road construction. 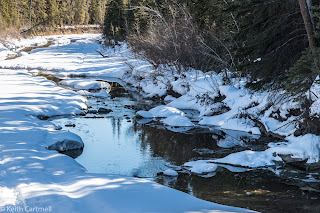 Looking to the right, you see the icy path leading to the hill of death. I was in raptures about the light through the trees, but the camera didn't quite capture it the way I saw it, so I had to tweak it a bit. You might have seen this photo on Instagram. 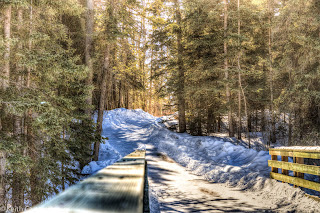 In other news, the swim mojo is returning big time! I've been swimming further, having done 1.5K in a respectable time for me the other day. Plus the speed in shorter distances is coming back. Really pleased about it.