There I was, on a nice stroll through Fish Creek, when suddenly I got that watched feeling. 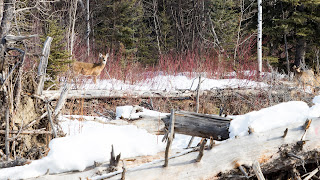 I was looking for nice shots between bridge 2 and 3, which is generally pretty photogenic. I turned around to look over the logjam, and there they were. I think it's a mama and a fawn. I strolled the other way to leave them in peace. I got some nice shots but nothing spectacular.

But that watched feeling. I'm getting it more and more, and not from living things. It's our devices. It used to be that on was on, off was off, and a human changed the device from one state to another. Things aren't so clear cut anymore.

Many electronic devices still draw a tiny bit of power even when they are supposedly off. That's the price of having devices turning on instantly, and remembering their state, just to make things easier and faster for the humans. Consider the phone in your pocket. It looks off, but we all know that depending on your settings, it could blink it's lights or make noise to attract your attention to that tweet of world shaking importance. Pick it up to ask it something, and you might get a useful answer.

Ok, so actually turn it right off. Is it really off? No. Plug it in and it's awake enough to know to start charging the battery. It might even talk to the cable and charger, to ask them if they are authorized equipment approved for the task.

Some of our devices have cameras and microphones. If we've set them to be off unless specifically in use, how do we know that they're really off?  I know people that have taped a piece of paper over the camera on their computers.

We've already established your phone knows who you are, and where you are to within a few metres. It also knows what else is there, as in nearby stores. It might know your credit card numbers, and therefore indirectly knows your credit history. Check Facebook or do a Google search, and you're likely to see ads that directly relate to the stores around you.

If the device is smart enough to recognize "Hey Siri" at any random time, what is is doing with all the other noise it "hears"? Is it relating it to the nearby stores to better learn how to recognize speech? Does it related what you say to your in person buddy and text to your other buddy?

And all the apps that use speech to text technology, does it also compare what you said to the corrections you made? Will the phone get smart enough to recognize and correct your speech characteristics? So for example, I have a buddy named Ken. I have never once seen my phone spell it correctly no matter how carefully I pronounce it. There are too many other words that sound similar. And yet, any human would know I was referring to a person by their name, as in "would Ken like to join us for coffee?" I suspect that it won't be long till our phones figure it out too.

I suppose if you really wanted, you could turn your phone off totally, till you needed to use it. You could turn off your electronic devices, then turn off the power bar they are plugged into, and if necessary, unplug the power bar. That would save a little bit on your electricity bill, and be mildly inconvenient. But maybe there is a little tiny battery in there, keeping some parts of the device alive.

Did you know that some TV's can be controlled by gesture? There you are sitting on the couch 10 feet away, waving your hands and having the TV obey you. How nice! Or, wait. That's a camera watching you, waiting for you to gesture. Most of us are just sitting on the couch watching. Maybe we're eating. Maybe we're snuggling our sweetie with varying degrees of intimacy. Maybe we don't feel the need to be fully dressed when watching a movie. Do you really want a camera watching you? Do you really trust that it's off or only "seeing" specific gestures? Is the gesture images being processed on the device, or does the data go to a higher powered computer via the internet?

Or the various cameras in our life. Security and traffic are the best known. Facial recognition software is getting better and better. Walk into a store, or maybe even just past it, and the computer hooked up to the camera recognizes who you are. Maybe it does a Google search on you to see if you might be interested in the products sold by that store.

So there you are, going about your day. The traffic cameras take a photo of your car, or rather more particularly, your license plate. The photo is time and date stamped, as are any photos of you taken by security cameras in public places.

There are any number of apps that track your location to produce a map of where you went, how fast, how many steps you took if walking or running, along with other data if you've enabled it. The phone could be storing that data regardless of you starting the app or not. And that's to say nothing of your browser history, emails, or texts. And you wondered why the American customs officials are so eager to seize your phone and search it.

Right now it would be difficult and time consuming to pull all that together, and the police would probably need a warrant for at least some of it. What about hackers with no compunctions about invading your privacy? Sure, you say, if I'm not breaking the law, what do I have to hide? Hmmm, lets think about that. Which doctors or other therapists do you visit? Or maybe you cheat on your spouse, do you really want someone knowing where you've been? Maybe you're visiting a dodgy tax lawyer. Maybe you've been out to a bar festooned with security cameras; could they track how much you've had to drink, then tie in data from a traffic camera, and the police get an 'anonymous' tip? All in the name of public safety, of course. Or maybe you'd be willing to pay someone to be quiet, who could demonstrate they knew of your various travels.

This is how it starts, public safety. It's for our own good. But when the so called guardians are enforcing morals, rather than laws, it quickly turns into a quagmire. That dodgy tax lawyer might not be doing anything actually unlawful, merely helping someone set up a corporation and it's none of their business that the corporation is being used to evade taxes. Some people think evading taxes is good sport, even using unlawful methods. Or the sex trade, actually paying for sex is legal in Canada, though some frown on it. What if one of those people can snoop through your data?

Even if we can persuade our elected officials to do something to safeguard our privacy, how will we know that the laws are actually being followed? Quis custodiet ipsos custodes?

Email ThisBlogThis!Share to TwitterShare to FacebookShare to Pinterest
Labels: Essay